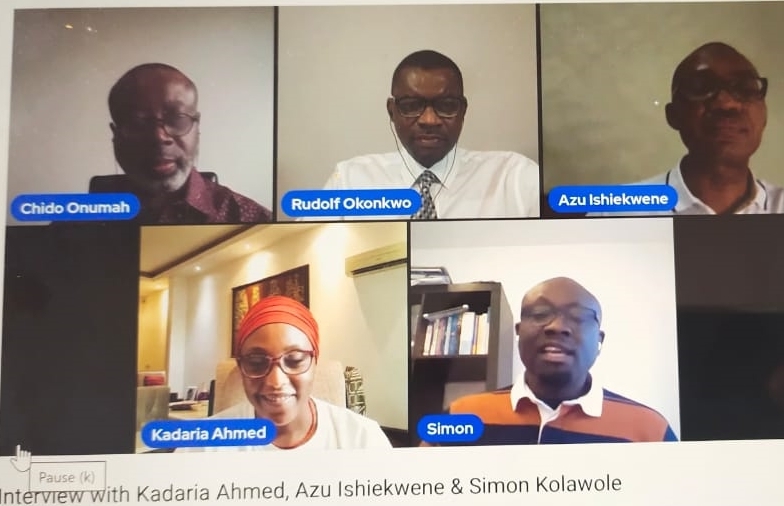 As activities gradually gather momentum for the 2023 polls, major stakeholders in the media have frowned at the concentration of media coverage on only the big political parties and politicians at the expense of the smaller ones.

The stakeholders argued that it is a disservice to the country if media attention is only focused on the ruling party and the major opposition parties without giving the minor parties opportunity to be heard.

They equally charged media practitioners on objective reporting and investigative journalism, which according to them are very key in strengthening democracy.

The stakeholders spoke Sunday as guests of  the online programme, 90MinutesAfrica, anchored by veteran Journalists, Rudolf Okonkwo and Chido Onumah.

Speakers at the event urged media practitioners in the country to provide positive media content that would help safeguard the future of the country.

In his contribution, publisher of TheCable, Simon Kolawole, stressed the need for journalists to undergo proper training before moving into the field.

He decried the invasion of the media industry by untrained practitioners who have no regards for media ethics.

Kolawole insisted that journalism is not an all comers’ affair, adding that the only way to restore public confidence in the media is to rid the industry of quacks.

He, however, noted with concern, the poor welfare package for media practitioners in Nigeria, arguing that journalists are ready to put their lives on the line for their job if well remunerated.

The Chief Executive Officer of RadioNow 93.5FM, Kadaria Ahmed, regretted that media space had been skewed in favour of the big parties.

She noted that the media play a pivotal role in strengthening democracy, and must resist every form of bias in the discharge of that task.

Ahmed tasked the media in Nigeria to go beyond the discussions on zoning of political offices in the 2023 elections and focus on the credibility of candidates.

She argued that if the media take advantage of their agenda setting role they could re-direct discussions on the right issues ahead of the polls in the interest of all.

According to her: “The media should focus on setting an agenda for a better candidate but, sadly, we are stuck in between the zoning of presidential candidates, religion, party primaries and high cost of forms.”

She also tasked media practitioners to delve into investigative reporting to hold leaders accountable, although she noted with concern, the peculiar situations journalists operate in Nigeria.

In his contribution, Senior Vice Chairman, LEADERSHIP Newspapers, Mr. Azu Ishiekwene, expressed concerns over the lack of objectivity in some media content. He urged media houses to set up guidelines and standards in their newsroom on the coverage of elections.

Describing the media as an enabler of democracy, Ishiekwene, restated the need for media practitioners to be properly trained to avoid abuse of the ethics of the profession.

According to him, a journalist should have the requisite qualifications and on-the-job training to be able to uphold the ethics of the profession. He harped on the need for the expansion of the knowledge base of journalists on the Freedom of Information Act, FoI,  as activities for the 2023 elections get underway.

Ishiekwene identified the interest of media owners as a serious factor that affects the coverage of political activities.

He noted that vote buying and selling as well as the misuse of security agencies during elections were some of the factors that could negativity affect the outcome of the 2023 polls if not addressed.