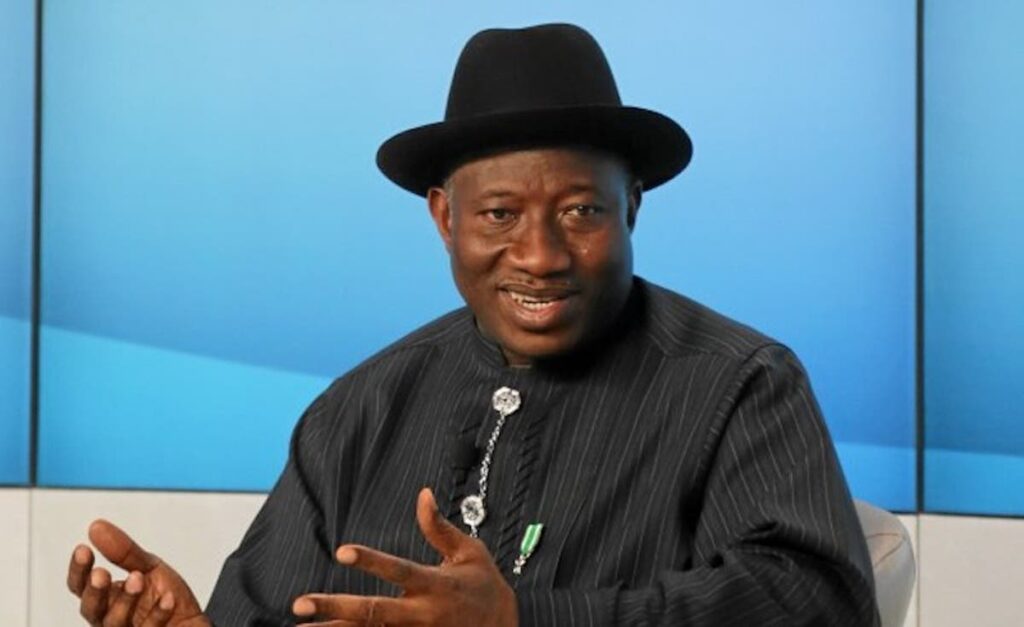 Former President, Goodluck Jonathan, has obtained the Expression of Interest and Nomination Forms for the All Progressives Congress (APC) Presidential ticket.

Jonathan obtained the forms few hours after the Minister of State for Petroleum Resources, Timipre Sylva, obtained his.

Jonathan and Sylva, who are former governors of Bayelsa State are political rivals.

Speaking on Jonathan, the Director General of Voice of Nigeria (VON), Osita Okechukwu, said: “We are open to accept any presidential candidate because it is our brand that is attracting them.

“Anybody with the ticket of APC has 60 -70 percent winning success.”

However, the leader of the group that purchased the forms for the former President, Ibrahim Abdullahi, told Ikengaonline, thus: “I represent two of the most vulnerable communities in our country. The nomadic pastoralist and the almajiri communities who have decided to purchase this form for our former president, Dr. Goodluck Ebele Jonathan to come back and rule this country and continue with the good work he had started.

“You may recall ladies and gentlemen of the press that during Goodluck Jonathan’s era he was the first president since independence of Nigeria who had found it expedient, who was magnanimous enough. Some of us remember the almajiri community, he brought a comprehensive policy of reformation and integration of the almajiri into the mainstream educational system in Nigeria. It was the dream and the vision of President Goodluck Jonathan that if that program had continued it would one day produce from the Almajiri system of education: Doctors, engineers, etc. Unfortunately, that program was kept aside as soon as he left. Other parts of the community (the vulnerable community) that Goodluck Jonathan wanted to really give a sense of belonging was the Fulani community – the nomadic pastoralist.

“He set aside 60 billion naira in the coffers of the Central Bank of Nigeria which was to be used to develop livestock in Nigeria. I believe if government had continued with that program, today, we will have been Denmark, Sweden, the Holland of the entire Africa in terms of livestock, in terms of beef and so on. Looking at this, situation and of course the problems Nigeria today is facing, we believe that only a leader with that kind of patriotism, a leader with that kind of fairness who is ready to give every Nigerian sense of belonging can be able to rule this country and that leader is Dr. Goodluck Ebele Jonathan.

“As you may have heard, a lot of interest groups have been coming out to urge him to contest but we felt that because of the deadline that was given whether he agrees or not we need to purchase this form. Goodluck Jonathan is for all Nigerians. As Nigerians we believe he has interest of this country at heart, he will accept us. You can see that we are almost late to buy these forms, we have been trying with the Almajiri and the Fulani’s selling our cows. We were able to raise this money just yesterday and we decided to come and purchase these forms. Let Nigerians support this project. If you are talking about Goodluck Jonathan, I don’t think there is any aspirant so far that we have seen that can be compared in any way with Goodluck Ebele Jonathan. Unless if Nigerians are not serious, unless if we don’t want to integrate and unite in this country, unless if you want to continue playing the politics of religion, tribalism. You see I’m a Fulani man, coming from the far North but I tell you there is no Nigerian today that I can cast my vote for, campaign for except Jonathan. For me Jonathan is best amongst all the aspirants, irrespective of where he comes from or religion.

He also stated that former President Jonathan is a member of APC.

Ikengaonline had reported that Afenifere leader, Pa Ayo Adebanjo, had asked Jonathan to forget his rumoured ambition and support a South-East candidate to be president in 2023. “It is disgraceful for former President Jonathan to say he is even considering running for the presidency again.

“Let him go and rest. It is the turn of Igbos to produce the next president of Nigeria.

“If the presidency is based on merit today, Igbos alone will continue to rule Nigeria,” Chief Adebanjo asserted.