Odinkalu mocks Emefiele’s lawyer, Ozekhome, for not including APC in suit against INEC 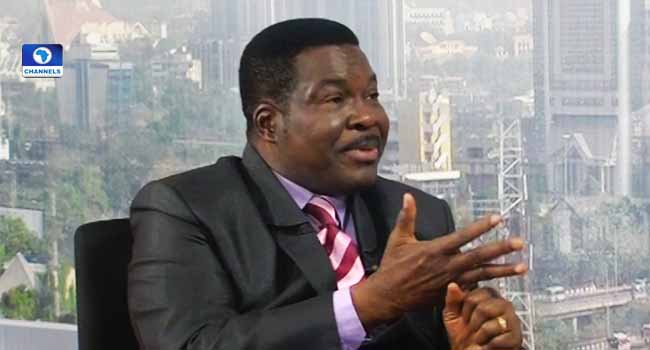 Former Chairman of National Human Rights Commission (NHRC), Professor Chidi Odinkalu, has mocked the legal team of the Governor of the Central Bank, Mr. Godwin Emefiele, for not including the All Progressives Congress (APC) in the suit by the CBN boss seeking an injunction against alleged moves to stop him from contesting in the APC presidential primaries.

Emefiele’s lawyer, Chief Mike Ozekhome, dragged the Independent National Electoral Commission (INEC) and the Minister of Justice, Abubakar Malami, to the Federal High Court, Abuja, claiming that they were plotting to disqualify Emefiele.

Professor Odinkalu wondered why a senior lawyer in the class of Ozekhome, a Senior Advocate of Nigeria (SAN), would omit such interested party like APC in the matter and be suing INEC and Malami that have no locus in the APC party affairs.

“Notice this malpractice & see that these ppl are evil: @OzekhomeMike on behalf of @GodwinIEmefiele wants an order against @OfficialAPCNg but he only sues @inecnigeria & the #HAGF, who have nothing to do with #APCPrimaries. 2mrw, Mike will tell us how he is #ConstitutionalLawyer!

“This morning, in Abuja, @OzekhomeMike filed an application seeking an ex parte order in the Fed Hi Crt against @inecnigeria & #AbubakarMalami, to enable @GodwinIEmefiele run for @OfficialAPCNg tkt. He didn’t join #APC. Judge has just refused to do evil. Next date 12th”.

Emefiele had told the court that both INEC and Malami “are making frantic efforts” to stop him from participating in the presidential primaries.

He prayed the court to order INEC and the AGF to maintain status quo ante bellum and not compel him to resign from his position as CBN Governor, until 30 days to the general elections.

Emefiele urged the court to, in the interim, “restrain the two defendants from taking any step that could push him out of office, pending the determination of the suit”.

“This motion, is therefore, seeking that the court should grant an order for maintenance of status quo.

“Let my lord not allow anybody to do anything,” Emefiele’s head to legal team, Ozekhome, prayed the court.

Giving reasons he would not resign as CBN Governor, Emefiele argued that since he is not a political appointee, he was not caught up by section 84 (12) of the new Electoral Act, since he is a public servant.

He further drew the attention of the court to a subsisting judgement of the Federal High Court in Umuahia, Abia State, which he said voided section 84 (12) of the Electoral Act, 2022.

The apex bank boss prayed the court to invoke section 318 of the 1999 Constitution, as amended, and bar the defendants from asking him to vacate his office, until 30 days to the presidential election.

Emefiele also prayed the court to among other things, determine:

“Determine whether by provisions of section 84(3) of the Electoral Act, 2022, “a political party can by its constitution, guidelines or rules, impose any nomination qualification or disqualification criteria measure, conditions on any aspirant or candidate including the Plaintiff herein, in its primaries or constitution, guidelines or rules for nomination of its candidates for election besides those criteria as prescribed under section 65, 66, 1067, 107, 131, 137, 177 and 187 of the Constitution of the Federal Republic of Nigeria, 1999 (as amended).”

“Determine whether by the combined effect of the provisions of section 84(3) of the Electoral Act, 2022, and section 137(1) (g) of the Constitution of the Federal Republic of Nigeria 1999 (as amended) which require a public officer to resign, withdraw or retire from his employment at least 30 days before the date of the presidential election, the plaintiff can be mandated and/or compelled to resign, withdraw or retire his position as the Governor of Central Bank of Nigeria earlier than 30 days to the political party primary or Presidential election as prescribed by section 137 (10 (g) Constitution of Federal Republic of Nigeria, which Presidential election is scheduled to take place about February 2023, while the primaries are fixed for 30th May and 1st June, 2022.”