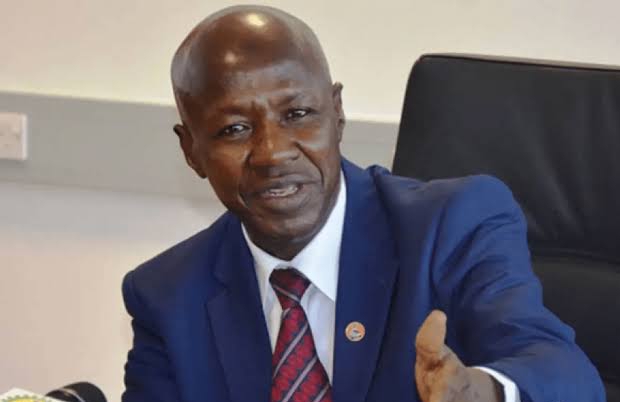 He said Magu was promoted alongside some senior officers at the 15th Plenary Meeting of the commission on Friday.

He said aside Magu, seven Commissioners of Police were promoted to Assistant Inspectors General of Police.

“The Plenary Meeting which began on Wednesday, May 11th 2022 was presided over by Alhaji Musiliu Smith, Chairman of the Commission and former Inspector General of Police. DIG Amadi, currently acting, replaced late DIG Joseph Egbunike and will be representing the South East in the Force Management team while DIG Senchi was the most senior in the AIG cadre.”

The eight Commissioners of Police promoted to AIGs were;

On July 7, 2020, when he was still at the helm of affairs in the EFCC, Magu was arrested, detained, and suspended as the acting chairman of the anti-graft agency — after he appeared before a panel probing allegations of gross misconduct against him.

The panel led by Justice Ayo Salami subsequently recommended Magu’s removal as EFCC boss “for failing to properly account for N431,000,000.00 security votes/information fund released to the office of the Executive Chairman of EFCC between November 2015 and May 2020”.

He was also accused of causing the “disappearance of evidence, stoppage and suppression of cases under investigation and prosecution, and omitting to arrest suspects” in cases involving a former deputy senate president and a former managing director of Pipelines and Product Marketing Company (PPMC).

Magu was further accused of suppressing high profile cases involving four former governors, one of whom is currently a senator.

However, since the panel submitted the report in November 2020, only a few recommendations have been implemented.

Magu has repeatedly denied the allegations against him through presentations made before the panel by Wahab Shittu, his lawyer.

The former EFCC boss also maintained that he never enriched himself while serving as head of the anti-graft agency, adding that the allegations against him are “unfortunate, spiteful, malicious and intended to cruelly destroy my hard-earned reputation”.

Meanwhile, the federal government is yet to make public the White Paper on the report of the Salami panel. (Daily Trust)