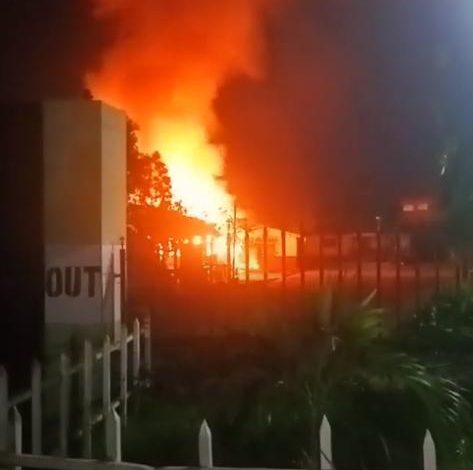 Hoodlums have attacked Idemili North Local Government secretariat in Ogidi, and in the process, burnt down a Magistrate Court in the area.

Sources said the arsonists entered the premises on Sunday night to perpetrate the act.

Office files, furniture, and other items of property in the secretariat were destroyed in the inferno.

A video that has gone viral also showed that the entire building was reduced to rubbles, while vehicles parked inside the local government secretariat were also burnt.

Ikenga said: “Yes, the incident was confirmed, and our men were there to restore normalcy. Right now, the fire has been put off, and calm has been restored to the area.”

Ikengakonline reports that that attack came barely days after the State Governor, Prof. Chukwuma Soludo, visited the detained Leader of the Indigenous People of Biafra, IPOB, Mazi Nnamdi Kanu, at the Department of State Services (DSS) in Abuja.

The visit, according to the Governor, was part of the wider consultations with critical stakeholders in search of lasting peace and security in the South-East geo-political zone.