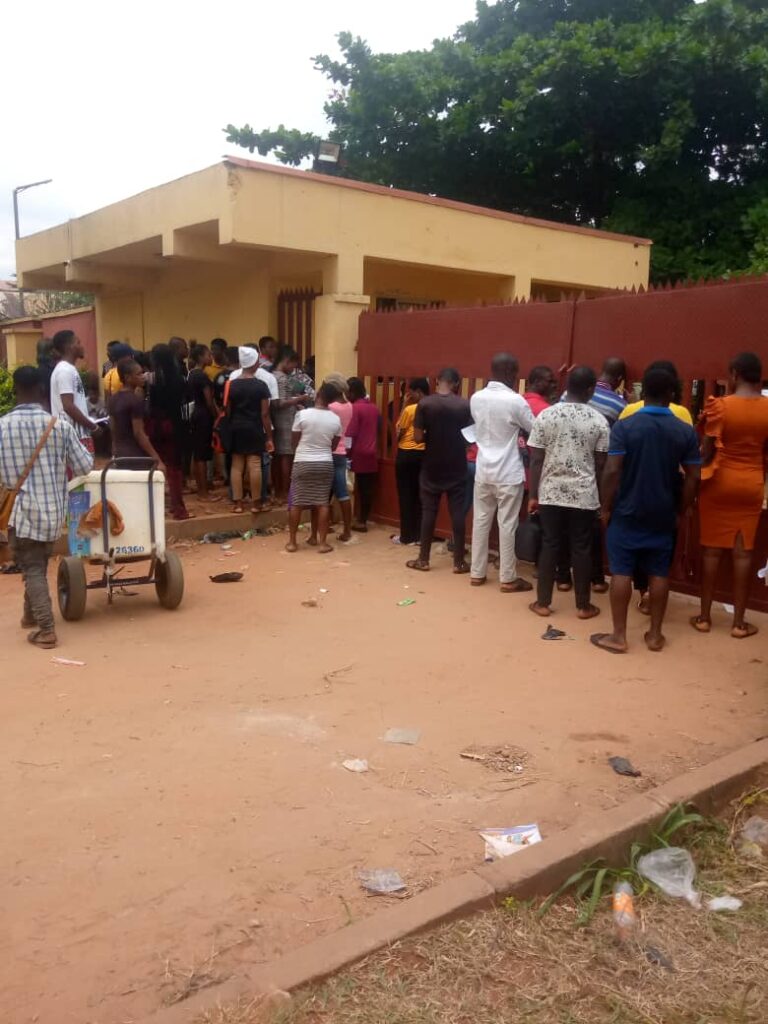 The Independent National Electoral Commission (INEC) headquarters in Anambra State has continued to witness heavy crowd of citizens who troop in to register for voters card in the ongoing Continuous Voter Registration (CVR).

Ikengaonline who visited the INEC headquarter at noon on Thursday met a long queue of individuals outside the premises of the Commission waiting to be allowed in. 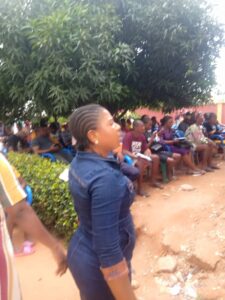 Some of the registrants who spoke to Ikengaonline said they had been at the INEC premises since morning and were yet to be attended to because of the huge crowd, others complained that the exercise was not moving fast.

Esther Okafor, a native of Umudioka in Awka South LGA said she came as early as 9:00am and was still waiting to be registered.

According to her:”When I came, I was made to first, queue on a long line outside the gate before we were given forms to fill. After filling the forms, I was made to queue again in the line till it gets to number assigned to me before I can be are allowed to enter the gate.”

Another registrant, Kingsley Muo, who said the number given to him was 520 when he came in the morning lamented that he had spent some hours at the INEC headquarter at the expense of his business.

He regretted that the long waiting made him cancel his other plans for the day to ensure that he obtains his card.

“I am a commercial tricycle driver. So, I depend on whatever I get in a day to feed my family. I have been here since morning but the process is not moving as fast as it should be.”

Reacting to the development, the Commission’s Public Affairs Officer, Mr. Reginald Onyeukwu, blamed care-free attitude as the reason for the heavy turnout, noting that people of the State waited for the concluding time to come for their voters card registration.

According to him, “the registration has been ongoing since March, 2021 until it was interrupted by the governorship election in the state but resumed after the electioneering period in the state. Since then, the people did not come only for them to start trooping in at the dying minutes.”

Onyeukwu disclosed that INEC has re-opened its four Local Government offices in the State, after they were closed down earlier due to the wave of insecurity ravaging the state.

He said their re-opening was to enable INEC attend to the massive turn-out of eligible voters in the state in the ongoing CVR exercise.

He said the commission and the security agencies had made adequate arrangement to ensure adequate security in the affected local government areas, and, indeed, at the various centres the CVR exercise are taking place in the state.

Onyeukwu stated that the commission in the state had been correcting an erroneous impression among registered voters in the state who besieged the CVR centres demanding for renewal of their voter’s cards claiming that they were told that voter’s cards obtained in 2011 were no longer valid, and, that all those who possessed them should go to renew them.

He said the impression was wrong explaining that those who were expected to participate in the ongoing CVR exercises are people within the following three categories: “those who have not registered before and now want to register and obtain PVC; those who lost their PVC and want obtain replacement card, and, those seeking to transfer their voting point/centre.”

The INEC spokesman person made it clear that “no PVC obtained earlier, including those obtained during the 2011 voter’s registration exercise has expired.”