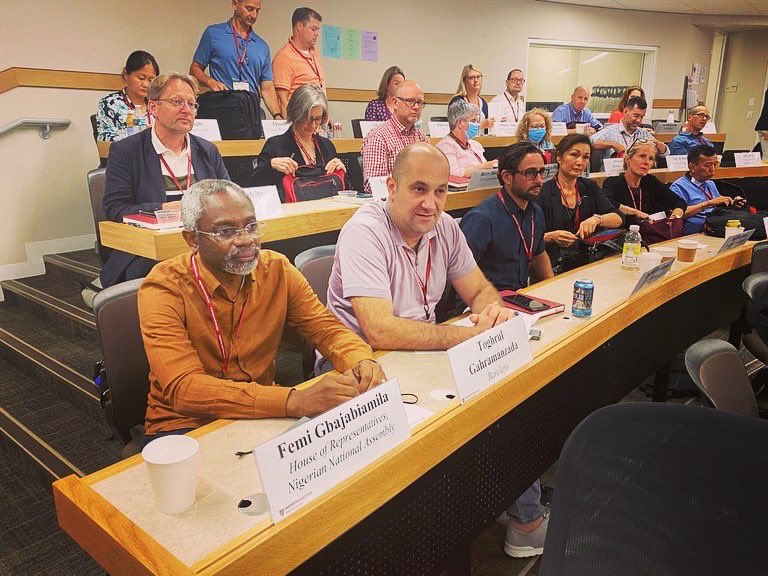 Speaker of the House of Representatives, Mr Femi Gbajabiamila, has apologised profusely for flaunting his ongoing education at the Kennedy School, Harvard University, online, while public universities in the country where he is the number 4 citizen remain under lock and key for over three months because of the Federal Government’s refusal to listen to the striking academic staff.

The lawmaker had taken to his verified Twitter handle on Tuesday to share pictures of himself receiving lectures at the prestigious Kennedy School at Harvard, saying one can never be to old to go back to school.

If the Speaker’s intention was to motivate fellow citizens, it backfired spectacularly as many Nigerians considered the post very offensive and insensitive, coming from a top government official and member of the ruling party, The All Progressives Congress, APC.

Also using the same Twitter handle a day after, the Speaker has, however, turned around to apologise and even went further to delete the posts.

In a series of posts on Wednesday Gbajabiamila said he regretted the post as it “was not sensitive to the present feelings of fellow citizens, especially parents and students who are presently bearing the brunt of the ongoing closure of public universities owing to the unresolved issues between the Academic Staff Union of Universities and the Federal Government of Nigeria.”

“Yesterday I posted a picture of myself at the @Harvard @Kennedy_School, undergoing a course.

“That post was not sensitive to the present feelings of fellow citizens, especially parents and students who are presently bearing the brunt of the ongoing closure of public universities owing to the unresolved issues between the Academic Staff Union of Universities and the Federal Government of Nigeria.

“I apologize for the post at this time, and I hope you will understand that it was not my intention to cause disaffection.”

The lawmaker also used the opportunity to reel out a long list of his contributions in the education sector in the country.

“As Speaker of @HouseNGR, I have made multiple interventions within the powers of the legislature to avert the ongoing strike.

“I had direct engagements with ASUU, relevant government agencies. The House of Representatives is still keenly involved in seeking a resolution to the issues so our students can return to school. We all await the outcome of the 2-week ultimatum given for the conclusion of negotiations with ASUU.

“In keeping with my passion for education,  I regularly take time to teach in some public secondary schools across the country.

“I will continue to work within the remit of the legislature to provide our young people with access to quality education,” he tweeted.