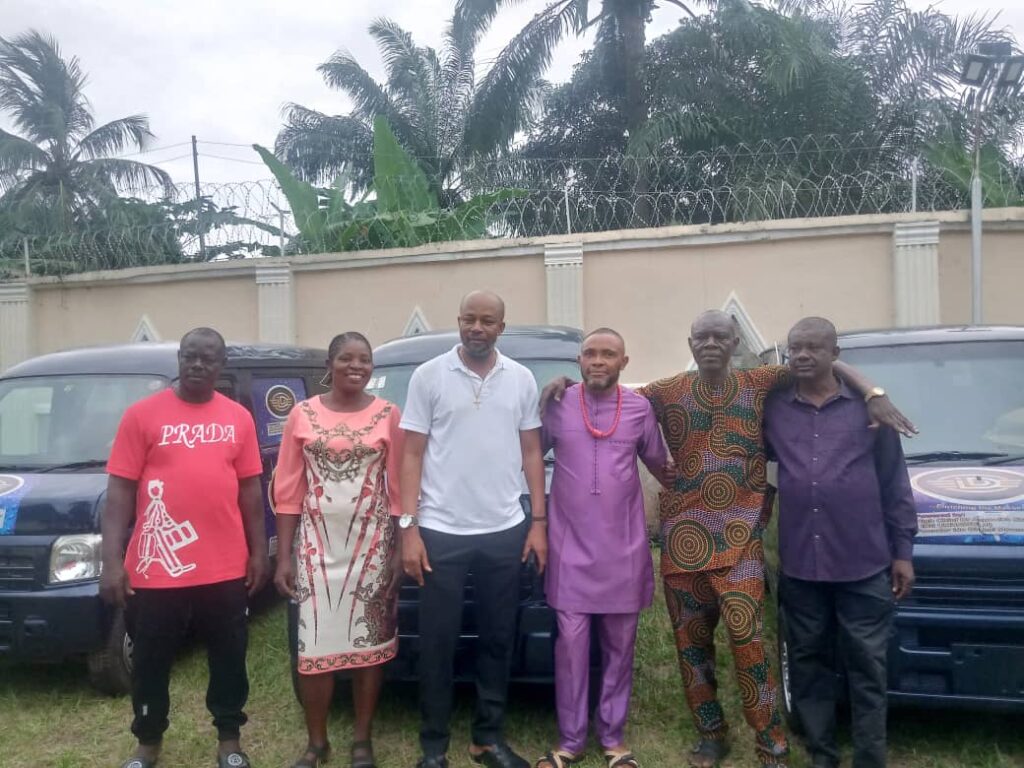 High Chief Ekweozor (3rd from left) with the beneficiaries, Sunday

Chief Ekweozor, a Maritime expert, who cuts a key figure in his community for his philanthropy and penchant for community development embarked on the empowerment to enrich the masses with fresh hope.

The beneficiaries were empowered  through Ide Global Movement, a foundation set up for his philanthropy and other think-home philosophy activities in his community.

They were gifted automobiles including three shuttle buses, a Toyota corolla saloon car and a mini truck as a means of livelihood and employment.

He also gave out twenty thousand naira, each, to fifty women in the community to enable them expand the scope of their businesses and engage in other meaningful ventures that would better their lives and their families.

Speaking to newsmen after the handover of keys, Chief Ekweozor explained that his reason for the intervention was to rescue people from poverty and to help the society through humanitarian activities.

“I’m doing the empowerment through Ide Global Movement (IDM), a foundation I established to enrich the masses, the needy and the downtrodden. It is an avenue to improve the lives of the people.”

Recall that the empowerment came despite the benefactor’s unsuccessful outing at party primaries for 2023 general election, where he vied to represent his Awka North-South Federal constituency at the House of Representatives.

He said the empowerment was in fulfillment of his campaign promises despite his failure to clinch the ticket, noting that he only offered himself as a humble servant.

According to him, “People are happy for me especially for having the heart to impact on lives despite what I passed through during the party primaries.”

“Politics is a seasonal thing. It must always come and go. I had told the people during my consultations before the primaries that I actually came out for a purpose. I’m a messenger of God and I came out to change the narratives in Awka North and South but the people misunderstood the aspiration I had, So after the election, I had to take the bull by the horn to still fulfill the promises I made.”

He, however, charged the beneficiaries to put the gifted vehicles and cash to good use and in turn use the proceeds to help family and humanity.

Earlier, the traditional ruler of Umuawulu community, Igwe Dr Joel Egwuonwu, thanked God for using the philanthropist to upgrade the downtrodden in the town.

“God is using him to alleviate the sufferings of the masses in Umuawulu. He has built so many houses for widows and widowers and those who cannot afford houses and has also sponsored our  youths on scholarships and skill acquisition programmes.”

Speaking with Ikengaonline, one of the beneficiaries, Mrs Chinyere Okpala from Enugwu village, Umuawulu, said she won a shuttle through balloting. “I did not expect this to be given to me and to my family. I thank God for the philanthropist who God has used to bless my life and family.

Also, Mr Oluchukwu Nwankwo, from Agbana Umuawulu, expressed joy at being empowered with the mini truck and prayed God to sustain the philanthropist and to enlarge his coast to do more for the people.