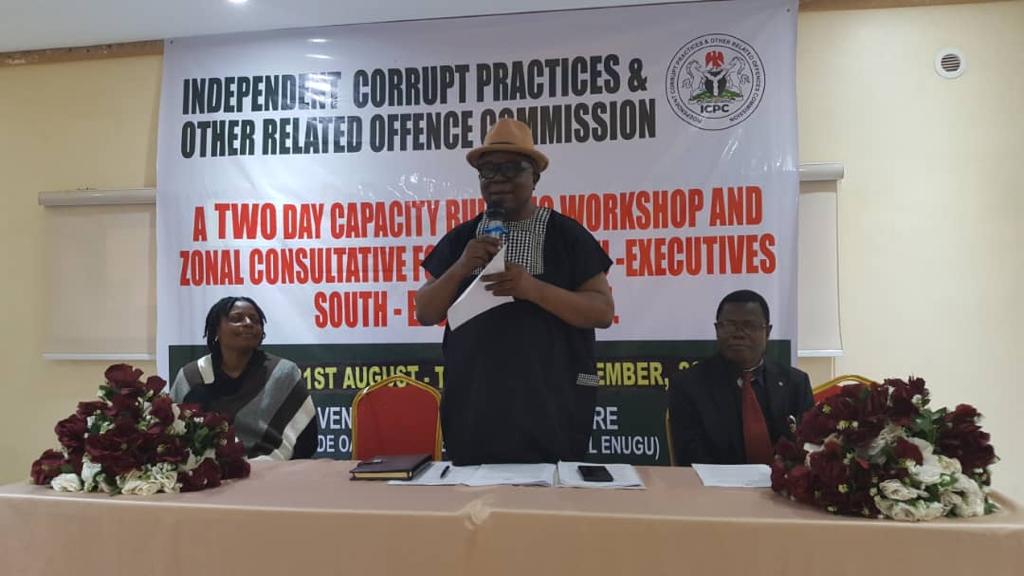 The Independent Corrupt Practices and other related offenses Commission (ICPC) has trained no fewer than 50 anti corruption agents in 25 Federal Government Ministries, Departments and Agencies (MDAs) in the South-East.

The Chairman, Prof. Bolaji Owasonoye disclosed this on Friday in Enugu during a ‘Two-Day Capacity Building Workshop and Zonal Consultative Forum for Anti Corruption Transparency Unit (ACTU) Executives in the South-East.’

Owasonoye was represented at the event by a board member of ICPC, Sen. Anthony Agbo.

He said that ACTU remained a vibrant tool to reduce corruption in the public service, especially at the federal level.

The ICPC chairman said that the training was organised to continually build the capacity of the ACTU members to enable them achieve the mandate for which they were established.

According to him, the anti corruption unit is focused on restoring transparency, probity and citizens ownership of public projects funded from public funds as appropriated.

The ICPC boss urged the participants to step up their efforts at ensuring a corruption-free public service.

“You are securing Nigeria and not accountable to your states. You are the eyes of the ICPC and need to be very sensitive to all around you,” Owasonoye said.

Also, the ICPC Resident Commissioner in the state, Mr Kennedy Ebhotemen, said that the event would upscale the capacity of the ACTU members.

Ebhotemen said that the training would enable the participants to be abreast of the commission’s initiatives.

He mentioned such initiatives to included the Constituency Executive Project Tracking, Ethics and Integrity Scorecard and the National Ethics and integrity Policy.

“We expect the ACTU  executive members to pass what they will acquire here to their colleagues in order to sustain the crusade against corruption.

“ACTU is a microcosm of ICPC expected to carry out preliminary investigations and other functions of the commission apart from prosecution in their respective MDAs,” he said.

He said that the ICPC had been able to harvest petitions from various ACTUs in respect to sharp practices in their respective organisations.

“We expect them to fight corruption. We are willing to sustain and train them,”Ebhotemen said.

Ikengaonline  reports that ACTU was established in 2001 by the ICPC with the support of the Head of Service of the Federation.

It focuses on monitoring official and private transactions in the MDAs.