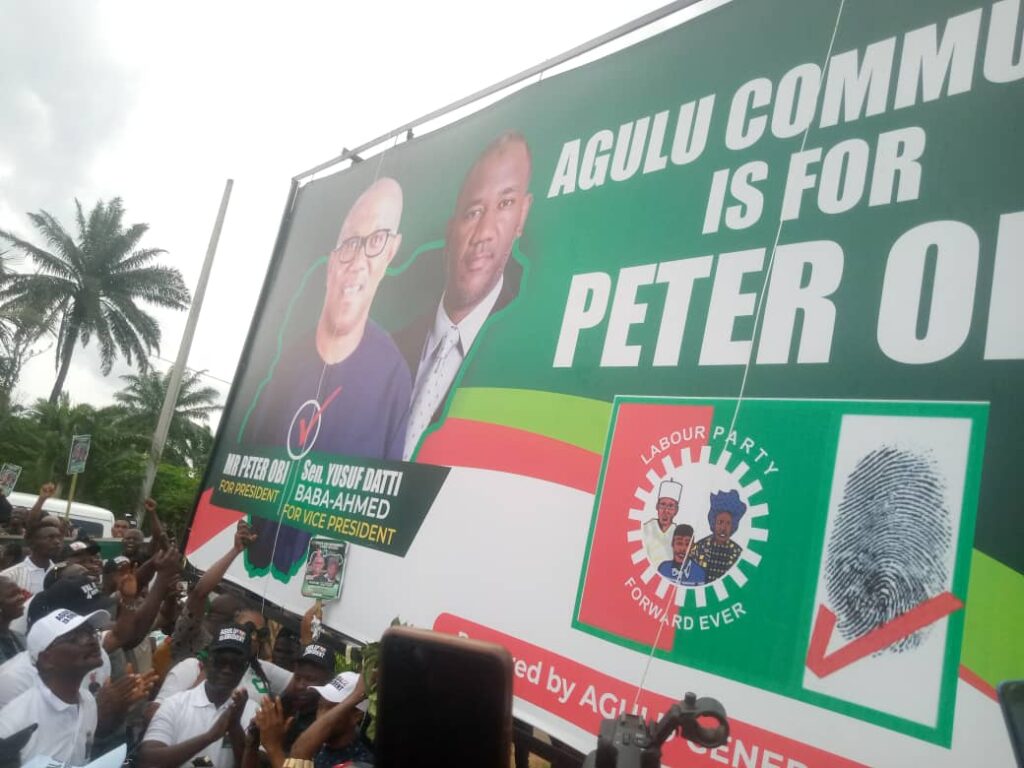 The mega rally was organized by the community in collaboration with Peter Obi Movement for new Nigeria (POMONN). It attracted sons and daughters of the community who shutdown their businesses and major streets of the town in solidarity with the movement.

The gathering marched down the streets of Agulu, while carrying banners with pro-Obi messages. The march ended at Nnamdi Azikiwe University faculty of Pharmacy, Agulu, where they unveiled the LP candidate’s presidential campaign banner. 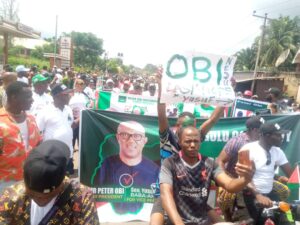 Addressing the townsmen and teeming supporters in a town hall meeting that preceded the march, President General of Agulu community, Oliver Afamefuna, said the rally was to show support and solidarity to Obi’s ambition for a new Nigeria.

According to him, “Nigeria as a nation has been saddened by the dangerous direction and thrown into divisions and crisis in recent times due to bad leadership.

“We cannot afford to give up our nation despite the immense disappointments we have faced. We must no longer leave our nation solely in the hands of our political job men who have shown frightening incapacity to move Nigeria forward and who are driving us to precipice.”

In an interview, the PG said “We saw in Obi a man of integrity and capacity to turnaround the ugly trend in the Nigeria.

“When he  was the Governor of Anambra State, he did well to transform the state. We trust him so much that we believe that every segment of Nigeria will have a new breeze of life when he becomes the president.”

Convener, Peter Obi movement for new Nigeria, POMONN, Amaka Obi, said the rally was massive and showed that the Labour Party candidate has the wherewithal to deliver the dividends of leadership in the country.

On his own, Eric Maduagwu, said Obi is best among equals. He described the Labour Party candidate as an expert in prudent management and who would use his expertise to manage the vast resources of the country.

In their comments, Comrade Julius Iloegbunam, Sunday Okoye and Andy Orakwelu of the community said the rally was a show of clear solidarity. They expressed confidence that Obi will claim landslide victory and insisted that his social media popularity will be translated in the actual voting during the election.