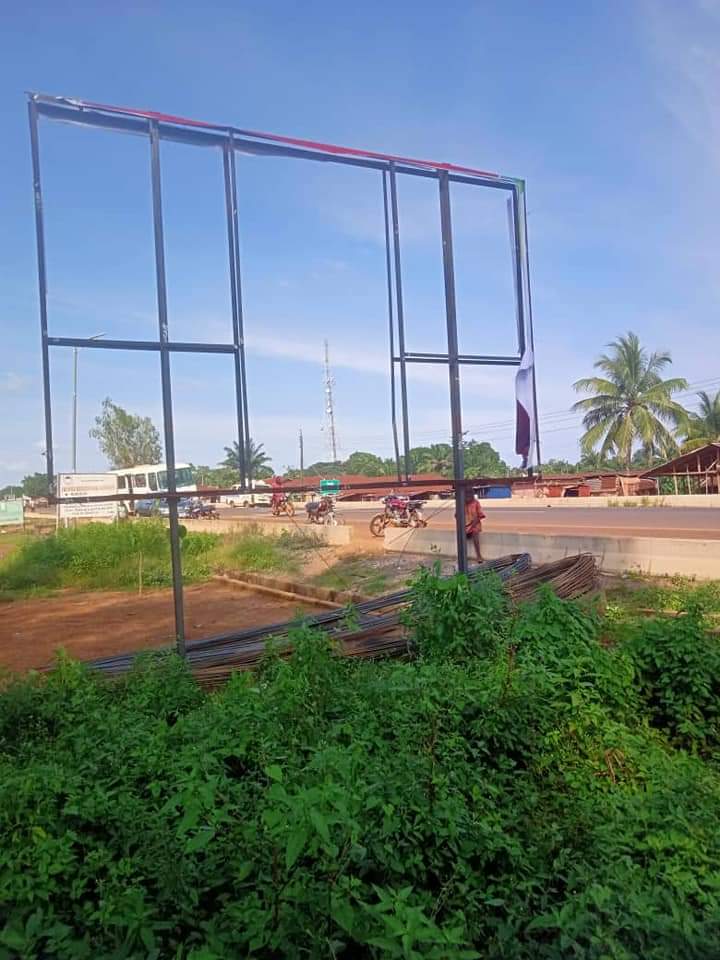 One of the destroyed billboards belonging to PDP candidates

Speaker of Ebonyi State House of Assembly, Francis Nwifuru, has been accused of sending thugs to destroy the billboards of Peoples Democratic Party (PDP) candidates in his Izzi Local Government Area.

The campaign posters destroyed, it was learnt, include those of the governorship candidate of the party, Ifeanyi Ọdịi, and that of the senatorial candidate for Ebonyi North, Senator Sam Egwu.

Others are the campaign posters of the House of Representatives candidate for Izzi/Abakaliki constituency, Barnabas Ofoke, and that of the Izzi East state constituency candidate, Jerome Elom.

The party made the accusation yesterday in a statement by the spokesperson of the party, Chika Nwoba.

Mr Nwoba in the statement said the thugs were led by one of the protocol officers of the speaker, popularly known as Jango.

Mr Nwoba said the thugs were in the Speaker’s convoy when they spotted Mr Elom and his supporters at Nwezenyi Primary School.

He said they pulled out of the convoy and went to accost Mr Elom and to disperse the meeting.

He said: “I got information that the convoy of Francis Nwifuru had a brief stopover at the Nwezenyi Primary School where a PDP House of Assembly candidate for Izzi, Jerome Elom, was interfacing with his supporters and ordered his protocol officer identified as Jango to go disperse them.

“The Jango did exactly that and even collected Barr Jerome’s phone and headed towards the position of a billboard showcasing PDP candidates, used a dagger and tore it round and packed the pieces into the bush. He left with the candidate’s phone till this moment,” he alleged.

Mr Jerome Elom, in an interview with our reporter corroborated Mr Nwoba’s statement.

According to him, “I went to Nwezenyi to mounting billboards. And after I successfully mounted billboards, I decided to entertain some of my supporters around that area.

“So why we were there, three Sienna cars came, I recognized one of them which was branded with APC logo. It is owned by one of speakers protocol officer, Felix Okemini aka Jango.

“They asked why should I mount billboards of Anyuchuks'(Odii) billboards in Izzi Local Government, that his billboards and poster should not be seen anywhere in the local government.”

“I said no, that this is politics, they should allow everybody to campaign. They said no that I should remove it and I refused. They climbed and removed the billboards themselves.”

“They were so many and I could not do anything. I tried to record what they were doing and they came and started dragging my phone. I say okay, take the phone. They collected it and left,” he said.

Mr Elom said the thugs managed to unlock his phone today (Thursday) and logged into his social media handles and posted an apology to the APC over the incident.

“Today, I found out that they have managed to unlock my phone and used my account to post an apology purportedly from me.”

But the speaker, Mr Francis Nwifụrụ, denied sending anybody to destroy any billboards in the area.

“The Speaker did not send anybody to go and destroy any billboard. The allegation is pathetic and untrue.

“They should get serious with their campaign and not to make such pathetic allegations. We have gone beyond such.

“You know Mr Speaker very well, he is a very peaceful man and there has never been anytime he had told any of his supporters to do such a thing,” Mr Oketa said.