There ‘ll be new Abia under my watch – Greg Ibe

By EditorSeptember 15, 2022No Comments4 Mins Read 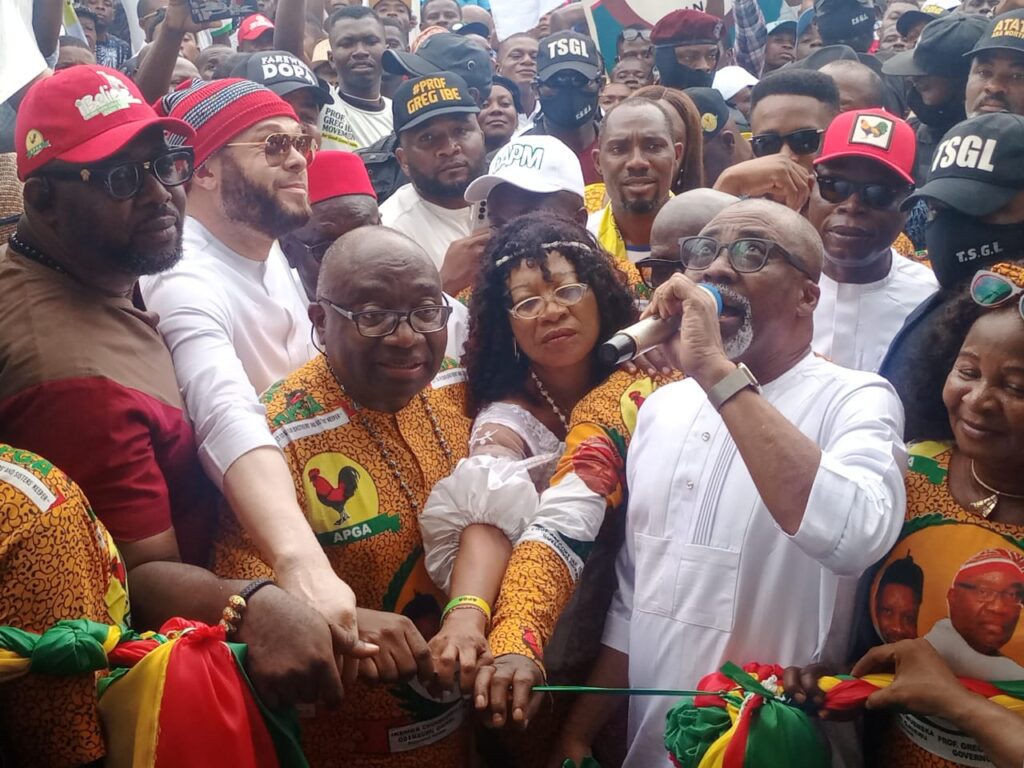 The Abia State gubernatorial flag bearer of the All Progressives Grand Alliance APGA, Professor Greg Ibe, has promised to deliver “a new Abia”  if voted into power in 2023.

Professor Ibe who made the promise Thursday while inaugurating his campaign offices in Aba and Umuahia after his return to the state, decried infrastructural deficit in the commercial city and other parts of the state.

He promised to declare a state of emergency on infrastructure in Aba if elected Governor.

Ibe said that “Aba is very critical to the survival of Abia State and the South-East economy” regretted that the “Enyimba City has become a ghost town” due to infrastructural decay.

Ibe who returned from a medical treatment abroad said he had returned “to take over power and rebuild the state.”

“I will declare a state of emergency on infrastructure in Aba until Aba is restored. I will listen to the yearnings Abians and build a state they will be proud of.

“Aba is now a ghost town but I will stop at nothing in making sure I build a new Aba that will become a leading city in Nigeria.

“I will build new Umuahia and give it a befitting look as a state capital. I have come to salvage Abia and not to steal.”

Professor Ibe said that while he was attending to his health challenge abroad he provided free medical and surgical outreach for Abians through out the 17 Local Government Areas of the state because of his concern for the health of the people.

He promised to revive all the medical facilities and hospitals in Abia to deliver quality and affordable health care to the people.

“During the free medical outreach we had, we have gathered statistics that will help us fix the health needs of our people.”

On how the chairmanship tussle rocking the state chapter of the party would impact on his chances, the governorship hopeful said the party had “no crisis.”

He added that “if at all there is crisis, God has recruited men like Abaribe, myself and others to deal with crisis.”

Professor Ibe recognised Rev.  Augustine Ehiemere as the authentic Chairman of the party, adding that APGA is one family capable of resolving any misunderstanding among them.

Inaugurating the Aba campaign office, former Senate Minority Leader and Senator representing Abia South, Chief Enyinnaya Abaribe, said that APGA had come to take over the state to provide the right leadership for the good of all.

He said that with the advent of Bimodal Voter Accreditation System BVAS, “the era of rigging of election or sitting in a room to write results is over.”

Senator Abaribe urged Abia voters to collect their voter’s card and get ready to support APGA end bad governance in the state in 2023.

He said that the ruling party was already jittery of APGA “because we have come to do what they failed to do.”

In a remark, APGA Chairman, Rev. Ehiemere said he was excited because the process of Abia’s total emancipation had started.

He said that the emergence of Ibe as the party’s governorship candidate had ignited an unstoppable political movement that would enthrone good leadership in the state.

He said that Ibe had the credibility, capacity and international contacts needed to fix Abia, while soliciting for support for all APGA candidates.

On the leadership crisis in the party, Ehiemere said APGA was intact under his firm leadership, adding that hired political merchants had wanted to distract the party but were disappointed.

He urged members of the party to remain committed and ensure victory of all their candidates in 2023.

Thousands of party faithful thronged from all parts of the state to give Professor Ibe a resounding welcome.