Promise him 90% of Abia votes

By EditorSeptember 17, 2022No Comments4 Mins Read 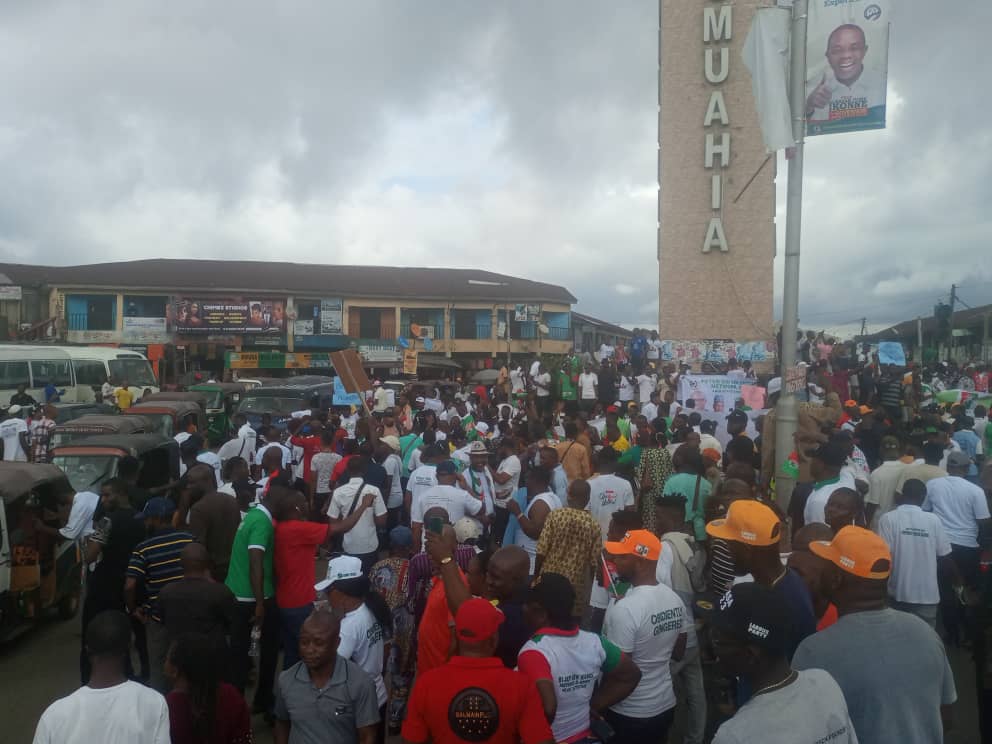 Umuahia, the Abia State was literally locked down, Saturday as supporters and fans of the presidential candidate of the Labour Party, Mr Peter Obi, staged a one million-man march for him.

The mammoth crowd of supporters mainly youths marched through the major streets in the state capital.

They carried placards with various inscriptions and chanted solidarity songs for Peter Obi and his running mate, Dr Yusuf Datti-Ahmed.

The rally tagged “#1 million Man-March For Peter Obi and Datti-Ahmed,” began from the Abia Tower Junction of the Enugu-Port Harcourt Expressway through the Bank Road, Aba Road before terminating at ShopRite Junction of Umuwaya Road by Uwalaka.

Other road users had a hectic day trying to meander through adjourning roads to avoid being held up in the traffic as the joyous  procession which started around 8:00 am lasted till around after noon.

The procession was being accompanied by a patrol van of the Nigeria police to maintain law and order.

Ikengaonline reports that the rally was peaceful and orderly.

Thousands of enthusiastic fans of Obi mostly youths from various political backgrounds vowed to deliver Abia to Obi at the 2023 presidential poll.

They said that Obi had restored their hope in the electoral process, vowing to stop at nothing in making sure he sweeps Abia at the forthcoming poll.

According to some of them who spoke with Ikengaonline, Obi will get more than 90% of Abia votes at the presidential poll.

They said that their support had nothing to do with his political platform but personality and antecedents.

According to the supporters, Obi’s legendary achievements in Anambra State when he was Governor cannot be controverted.

One of his supporters, Mr Bassey Prince, from Itu Local Government Area of Akwa Ibom State, said Obi’s credibility, vision and antecedents made him join the movement.

He said Obi’s blueprint for Nigeria would restart the country if the former Anambra Governor would be given a chance.

“I believe in his agenda to change Nigeria from consumption to production country,” he said.

He said that Nigerian youths had seen Obi as a beacon of hope and solution to the myriad of woes plaguing the country.

Speaking also, Emmanuel Ugwumsinachi said he was part of the rally because he wanted Obi to take over the country and transform it as he did while holding sway as Governor of Anambra State.

“Everything is not about money. We are tired of moneybags in politics. We need a real change, and we see in Obi the change we desire.”

She said that Abia women would vote massively for Obi.

Similarly,  the Abia State Coordinator of Peter Obi Support Network, Prince Solomon, expressed excitement over the massive turnout for the rally, saying it “has sent panic waves down the spine of those with structure.”

He said that the swelling support for Obi was due to his exemplary leadership qualities and had nothing to do with his tribe or party.

Solomon who said that the 2023 poll would be “individual and not party-based,” challenged  other candidates thinking they will hide under Obi’s goodwill to think twice.

“I’m excited Abia people have come out en masse to show support for a man who has shown integrity in holding public office.

“There were other Nigerians who held this same office that Peter Obi held but if you mention their names today people will vomit.

“Those who think they can hide under Obi’s goodwill should think twice. They should emulate him if they want Nigerians to look their way. In the coming election people will vote for Obi and other credible candidates like him in other parties especially those who have impacted on youths.”

Later in an interview, the  Abia State Lead Coordinator of all Peter Obi pro-groups, Madam Maltida, said that Nigerian youths had risen to take back their country.

She noted that the “Obi-Datti movement is unstoppable national movement that will give birth to a new and better Nigeria.

According to her, political principalities holding the country down are already panicking.

She said that by the time the ban on political rallies would be lifted the country would witness unprecedented mass rallies for Obi.