By EditorSeptember 18, 2022No Comments2 Mins Read 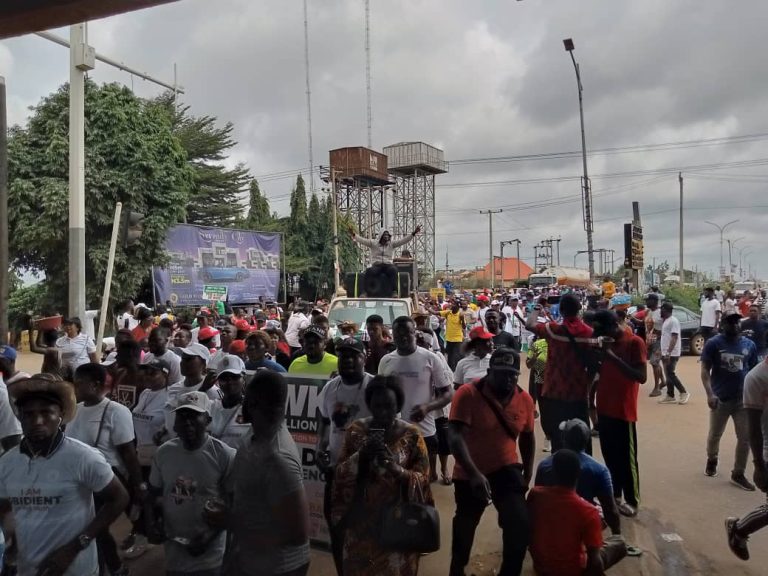 A coalition of support groups in Anambra State on Saturday held a solidarity march in support for the presidential candidate of the Labour Party (LP), Peter Obi, ahead of the 2023 general election.

The groups, marched from Alex Ekwueme Square in Awka along popular Arroma to Eke-Awka Road to the U-turn linking Kwata along Enugu/Awka Expressway.

The Solidarity March was organised by the Coalition for Peter Obi (CPO), in conjunction with about 60 other support groups and they were carrying several inscriptions which indicated their support for Obi.

Some of the inscriptions read: “Obi-Datti for Presidency 2023,″ Obi is the one to unify Nigeria,” “Peter Obi will create jobs and wealth for Nigerians,” and “There is no polling unit on social media, Get Involved.“

Others read: “Nigerians wake up and vote wisely,” “it is Peter Obi or Nothing,” “Go collect your PVC and Vote Obi-Datti.” “Peter Obi will rescue Nigeria,” among others.

Mr Chidi Nzekwe, Anambra state Lead Coordinator, CPO, said the rally was to sensitise residents on the need to be involved in electoral process to achieve desired change in the country.

“We want to sensitise the people on the need to get their permanent voter’s cards (PVCs) and be well mobilised concerning voting ahead of the 2023 general election.

“The crowd, especially the youths, that came out for this solidarity march today, is an indication that we need a disruptive system to drive good governance, and we believe Peter Obi is the right candidate.

“He is capable and competent to lead Nigeria to the promise land and we urge electorate to come out en masse and vote wisely for a better Nigeria.

“We also urge the electoral umpire to ensure they conduct a free, fair, transparent and credible general election in 2023, ” he said.

Mr Chekwube Mmaduabuchi, South-East Director of Mobilisation, CPO, said the rally was to create awareness of Obi ahead of the 2023 and to sensitise people on the party’s logo.

Operatives of various security agencies were on ground providing security and ensuring a peaceful rally.

Sixty-one-year-old Obi hails from Agulu in Anaocha Local Government Area of Anambra State and formerly governed of the state.