By EditorSeptember 19, 2022No Comments4 Mins Read 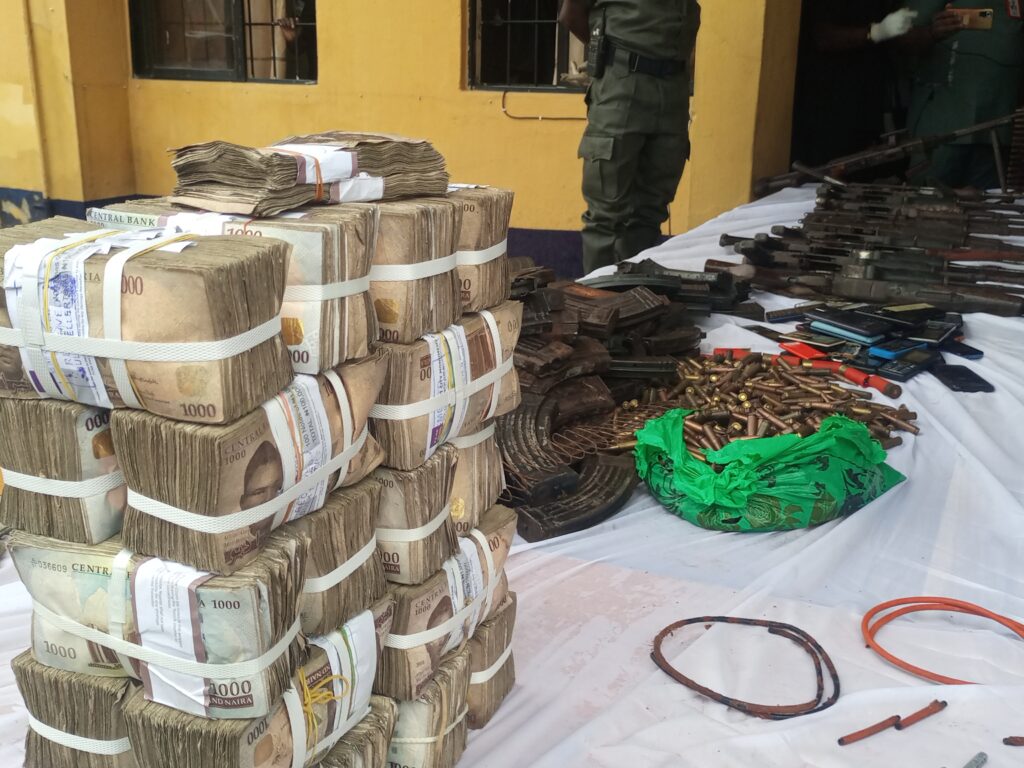 The Abia State Police Command has paraded a dismissed personnel of the Department of State Services, DSS, one Prosper Israel, along with nine other suspects for robbery.

Commissioner of Police, Janet Agbade, who paraded them Monday at the Police headquarters Umuahia, said the suspects were part of the 14-man robbery gang that ambushed a bullion van near Ntigha Junction of the Enugu-Port Harcourt Expressway on July 26, 2022.

Ikengaonline had earlier reported that the dare-devil gang, had during the robbery, shot dead the cash officer of a new generation bank escorting the bullion van before carting away unspecified amount of cash being conveyed by the bullion van.

Three police escorts on the convoy sustained life-threatening wounds while one of the robbers was killed during exchange of fire with  security operatives.

The CP expressed delight that the suspects were arrested after painstaking efforts by police detectives.

“I carefully studied their modus operandi and set up a special intelligence technologically-led investigative squad ( ITLIS) with a clear directive to arrest and recover weapons used by the deadly armed robbery gang,” the CP said.

The police boss gave the names of the suspects as: Adesoji Adeniyi from Ondo State; Nnamdi Nwaosu a.k.a “Prophet;” Chinwendu Israel from Abia; and Prosper Israel (ex – DSS personnel), also from Abia.

Others were Nwachukwu Albert a.k.a White (first armourer) from Delta State but resident in Lagos; Felix Ajaja from Ondo State; Moshood Opeyemi, from Osun State; and Matthew Christmas also from Delta.

Among the suspects also were Azubuike Amaefula a.k.a Zubby from Abia; and Monday Samuel (second armourer) from Delta but resident in Ondo State.

Others were two improvised explosive dynamites; a Mercedes Benz mini truck used in concealing firearms; and a cash of N10, 184,000.

According to the CP, the suspects during interrogation, confessed that they placed the bullion van on surveillance for two months.

The CP who said that efforts were on to trail three other members of the gang still at large,  pleaded with members of the public to always volunteer information about suspected criminals around them.

She said that the suspects would be arraigned after further investigations.

Later in an interview, the driver of the truck, Albert, said his role was to drive the truck where their weapons were concealed any time there was an operation to their target  location.

He said five AK 47 and one GPMG were concealed in the truck as at the time of his arrest.

The Aniocha North LGA-born suspect who said he dropped out from University of Ado Ekiti pleaded for forgiveness.

The suspect who said he deals in jeans wears, said he joined in the robbery operation to raise money to expand his  business.

“I have never killed. My own job is to drive the vehicle to the scene of operation and hand over the guns,” he said.

Similarly, the ex-DSS officer, pleaded for forgiveness, saying it was the first time he would be involved in any crime.

He said he was initially serving at the Abia State Government House but was dismissed in 2007 following his late reporting to a new posting.

According to him, it was his brother that gave him part of the money he got from the operation.

“My role in the operation was that I was in my house when my brother brought money and his colleagues and they shared and gave me part of it.

“I asked him and he told me how they got the money. I want to plead for forgiveness because I failed to rebuke him. So, it is obvious I participated because I can’t say I did not. But it was not intentional and I want society to forgive us.”