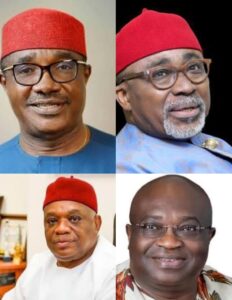 Some of the other candidates who also made the list  are Col. Austin Akobundu, PDP (Abia Central); Chief Chuku Wachuku, YPP ( Abia Central); and Darlington Nwokocha, Labour Party (Abia Central) with “court order” remark against his name.

A total of 33 senatorial candidates and 81 House of Representatives candidates from different political parties made the final list of contestants for the three senatorial seats in Abia.

The list signed by the Secretary of the Independent National Electoral Commission, INEC, Rose Oriaran-Anthony, was published at the INEC headquarters Umuahia on Tuesday.

According to the list obtained by Ikengaonline, 11 senatorial candidates are contesting for Abia North; 10 for Abia Central; and 12 for Abia South.

A careful study of the list shows that only 3 females representing less than 10 per cent are in the senatorial race for Abia.

Eighty one contestants comprising 12 females and 69 males made the final list for the House of Representatives.