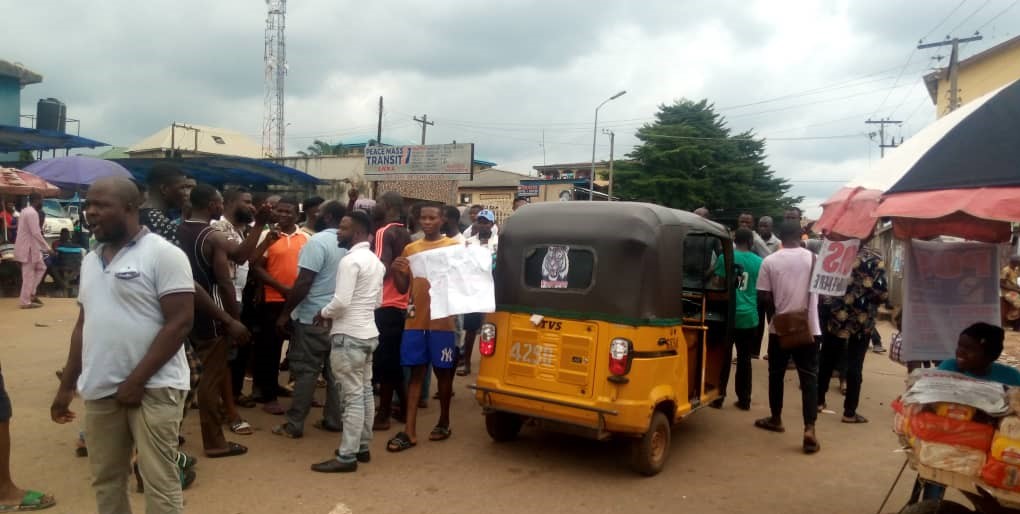 Tricycle (Keke NAPEP) and shuttle bus drivers, Thursday, paralysed movements in Awka, the capital of Anambra State, over the payment of N 15, 000.00 and N25, 000. 000 monthly as directed by the State Government.

Consequently commuters were stranded as the Keke and Shuttle Bus Operators refused to pick up passengers making them trek long distances to their destinations.

They also blocked Zik’s Avenue, the major road leading to Eke Awka daily market, with a call on Governor Soludo to review the N25, 000 for shuttle buses and N15, 000 for tricycle operators monthly revenue imposed on them.

The tricycle operators had accused their leadership of allegedly working with the State Government to impose the revenue on them without exhausting decisions and agreement on the said revenue which according to the operators is outrageous considering the present hardship and other economic realities.

Activities of the task force on recovery and monitoring of the payment of the said sum at the popular and busy Aroma/State Secretariat Junction as well as Unizik Temp Site Junction along the dual carriage Awka-Enugu-Onitsha had descended on them and forced the tricycle and shuttle buses to flee and in the process left commuters stranded.

During the raid, several tricycles and buses were seized from the operators and taken to the designated head office of the task force officials.

It was learnt that both the tricycle and shuttle bus operators are indebted for two months of the approved revenue after series of consultations and meeting between members of the various transport unions and stakeholders and the Governor.

A commuter who gave his name as Osita Okafor in reaction said he was forced to trek from his house at Ifite road to Aroma on foot due to non availability of the tricycle operators.

According to him, “As you can see, I am just coming out to Aroma now and why I came out late to where I was going was because of the protest by Keke (tricycle) operators over the said N15,000 monthly fee they are to pay to the state government. The situation as one can see is too bad because it will add to the already worsening socio-economic situation in both the state and the country.”

“The government should try to review its tax system and ensure that governance and government wear a human face. God forbids anything worse happens and these operators decide to increase fares. Again, the roads are too bad and everyone is suffering the hard bites both in the process of food stuff and every other thing across the nation,” he added.

Another tricycle rider who gave his name simply as Godwin said, “The monthly revenue of N15,000 on each operator is too much and not everyone can afford to pay it. We have our individual responsibilities and challenges. For example, majority of our members are on hire purchase schedule of between N25, 000 per month and above. This is aside weekly maintenance of our tricycles, payment of house rent, school fees, high cost of per litre of petrol, electricity bills and other domestic problems.”

They urged the state government to reason with the operators by scaling down the new revenue regime to at least N5,000 or N10,000 at most so they can conveniently pay and be able to take care of their families and as well as other personal responsibilities.