By EditorSeptember 24, 2022No Comments3 Mins Read 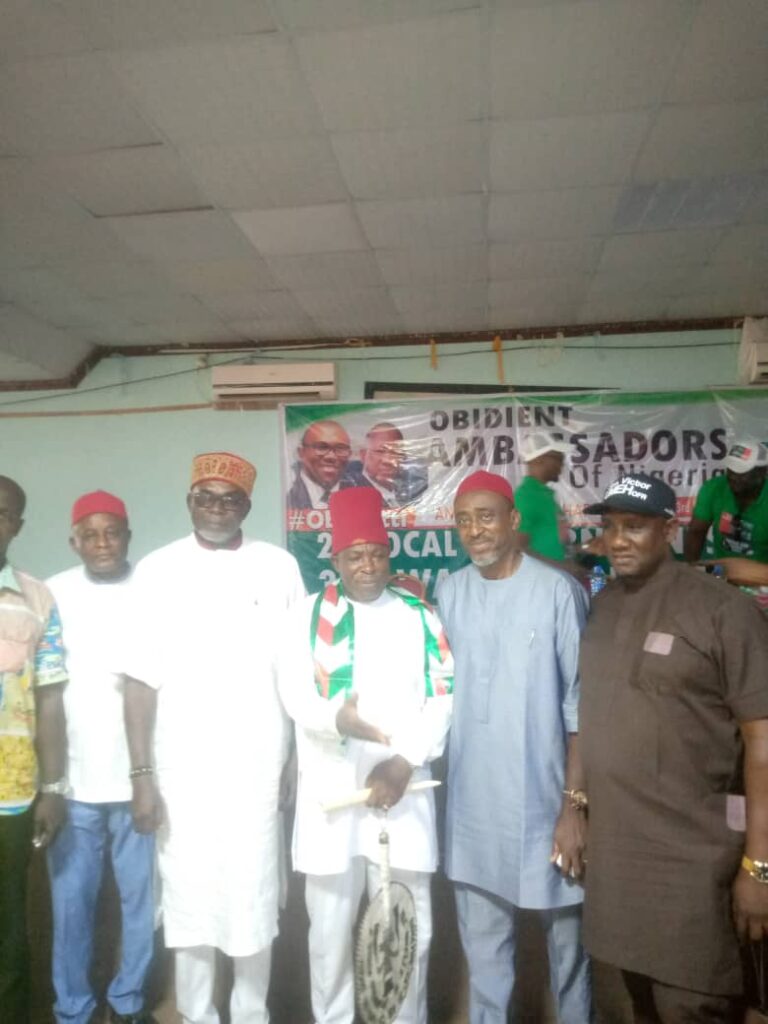 Chief Victor Umeh with leaders of the Obidient Ambassadors of Nigeria, Anambra State chapter, during the weekend

Chief Victor Umeh, a Labour Party Chieftain and  Anambra Central senatorial candidate in the 2023 general election, says the ambition of Peter Obi to become the next president of Nigeria after President Muhammadu Buhari is a national project.

Umeh said this at the official induction of 21 local government/326 ward chairmen structure for Anambra State chapter of OBIDATTI 2023. It held in Awka, the Anambra State capital during the weekend.

He said Obi’s ambition is a divine mission that will come to fruition in 2023 general election, noting that his emergence is the handiwork of God to liberate Nigerians from bad leadership.

“Peter Obi’s movement to become president of Nigeria is a divine mission and its going to come to fruition next year.

“The movement is a national project. Many people including the old and the young in all parts of the country are involved.

“The support is spread in all the nooks and crannies of Nigeria, and that shows how popular and accepted he is to Nigerians.

“Imagine that the students have been on strike for over 6 months and Nigerians have been force to buy kerosene at the rate of eight hundred and fifty naira. What Nigeria needs now is a candidate that will liberate the citizens from long suffering.

“Obi knows how to manage resources which is exactly the problem with Nigerian leaders. He will repair the country when he becomes the president and would turnaround the resources of Nigeria to be useful to Nigerians,” he said.

Umeh, a former national chairman of the All Progressives Grand Alliance, APGA, said opponents had planned to frustrate Obi from contesting in the presidential election but God’s hand was on him.

He also commended the group for initiating the movement in the state, and noted that Obi’s candidacy has already generated over 200 support groups spread across the country.

He urged the Ambassadors to be steadfast in their support of the Labour Party candidates and not be deceived or influenced by the opposition antics.

Speaking at the occasion, Barr. Chinedu Idigo, a former member of the Anambra State Judicial Service Commission, said Nigerians have had their worst leadership experience under the current and past administrations in the country.

“The people here are those tired of the failures of the country. We have experimented the parties but PDP and APC are the same, hence the people have decided they are not going back to Egypt.

“The first and second presidential journeys of the country under the Peoples Democratic Parties (PDP), and the All Progressives Congress (APC) were disasters.”

The Obidient Ambassadors Anambra Chairman, Chief Vincent Ezewuzie, in his address, described the group as a non-partisan association of like minds for the enthronement of good governance.

He said the members cut across many sociopolitical organisations responding to calls to save the country from total collapse.