By EditorOctober 1, 2022No Comments5 Mins Read 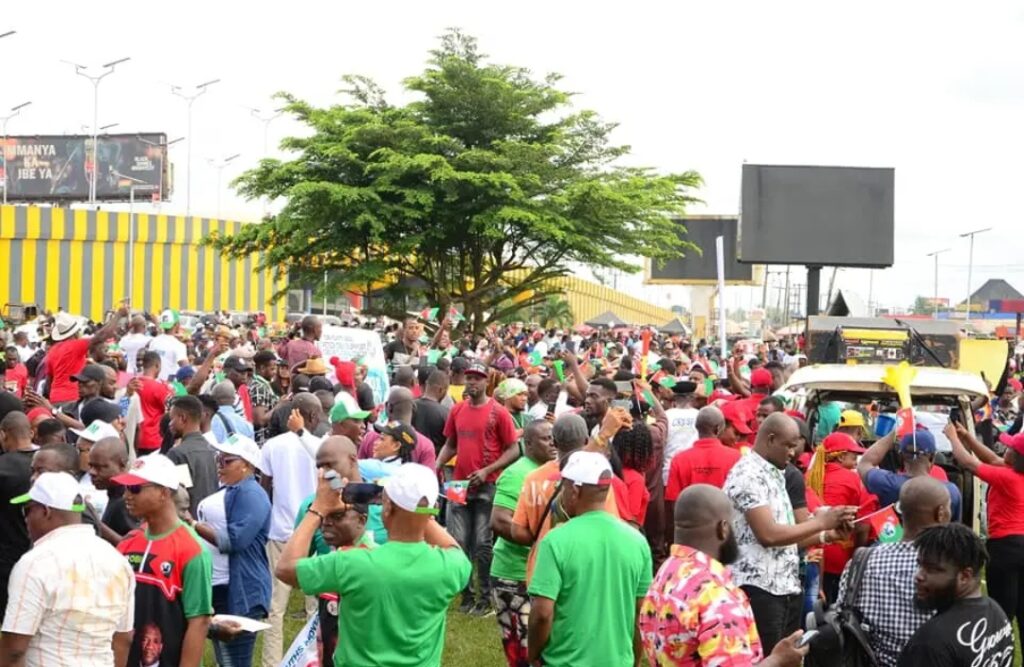 Aba the commercial nerve centre of Abia State was literally locked down on Saturday, as the supporters of the presidential flag bearer of the Labour Party, Mr Peter Obi, staged one-million man march for him.

The supporters who converged at various points at the city outskirts before storming the Enyimba City in a jubilant procession chanted solidarity songs and danced to the admiration of residents and on-lookers.

This is coming exactly two weeks after a similar march in Umuahia the capital city.

Meanwhile, the presence of one of Governor Okezie Ikpeazu’s main support groups, Okezie Victor Ikpeazu (OVI),  at the rally was very significant.

OVI participation in the Aba rally has also triggered  speculations that Obi may have been adopted by some Peoples Democratic Party, PDP-controlled states loyal to Governor Nyesom Wike of Rivers State.

The jubilant procession carried placards with various inscriptions such as, “Nigeria settle us with Peter Obi;”  “If you are Obi-dient, you can be useful;” and  “INEC please allow God to use you.”

Others were: “Obi-dient all the way;” “vote out bad leaders;” “Nigerians take back your country;” “We are the structure; “We no dey give shishi;” among others.

Motorists and other road users had hectic time, navigating the mammoth but peaceful and jubilant crowd.

Residents cheered the  procession as the supporters danced their way through the streets.

Commercial activities were literally brought to a halt as businessmen locked their shops to participate in the march.

In an interview with Ikengaonline, the Abia State Coordinator of Peter Obi Support Network, POSN, Comrade Prince Solomon, described the rally as a referendum on the forthcoming presidential poll.

He said that the swelling support for Obi across the country was a confirmation that he is the desire of the Nigerian voters.

The former President Students Union Government, Abia State University, said the Nigerian youths irrespective of their tribes and political leanings, had risen in unison to take back their country.

He said Obi remained the new face of Nigeria and a beacon of hope whose antecedents and track records remained un-matched.

Similarly, the General Leader of all Obi’s support groups in Abia, Madam Maltida, said a new Nigeria was on the threshold.

She described Obi’s supporters as an unstoppable mass movement propelled by the finger of God.

She predicted landslide victory for Obi in the forthcoming presidential election.

Meanwhile, the Coordinator of OVI, Chisom Amalahu, said it had become expedient to support Obi’s candidature irrespective of ones political sentiments.

“We’re here to tell people that we’re tired of how things are done in this country. As you’ve seen today, the expectation was for a million march but we’ve recorded above the expectations because almost everybody came out for Obi.

“We don’t care about anything else be it a party or whatever as long as the presidential election is concerned. What we the OVI Organization did today is to show others what should be done. It is authoritative and nobody can fault it.

“This action has shown that the Governor of Abia State cannot because of his party, lose sympathy for the desire of the majority. OBidient is a movement. It’s not a political party. It covers non-members of the Labour Party so, it’s not about the Labour party.

“OVI group supporting Peter Obi will not affect his party in the state. We’re only aligning ourselves with the interests of the majority of Nigerians. The signals are there. The signs are there that almost everyone is with Peter Obi.”

Similarly, Anayochukwu Ezenyi, hailed the decision of Ikpeazu’s support group to participate in the Obi/Datti rally.

He argued that national interest should be placed above personal desires, while urging other political parties to emulate the Governor’s pro-group.

As he he put it: “I came here in solidarity with the man of the moment, Mr Peter Obi, who the Nigerian youths and most Nigerians have decided that he should lead them. However, I’m happy to see what is happening today where people drop personal interest for the interest of the majority.

“The truth of the matter is that most of the Governors in PDP, APC and other parties may be telling people that they belong to party A or Party B, but as far as the presidential election is concerned, almost everybody is going for the best, and Obi is the best.

“It’s not a surprise that Okezie Ikpeazu’s Organization is supporting Peter Obi. Since we have done this I think it will be right for the Obi-dient Movement to also support Ikpeazu.”

Another supporter of the Obi movement, Mr CY Ukala, expressed confidence that Obi would win the presidential election with a large margin.

He, however, warned against any attempt to manipulate the result of the poll or rob Obi of his victory, saying that Nigeria might not be able to contain the ripple effects.

Obi/Datti rallies have been holding successfully in different parts of the country despite threats by some State Governments not to allow the march in their states.

It has also been generally peaceful except in Ebonyi State penultimate week where overzealous police officers disrupted the march as they teargassed the protesters claiming to have acted based on orders from above.

The action of the police has been widely condemned even as Gov. David Umahi denied authorising the attack on the Obi movement.