The World Bank has threatened to shut down its operations in Ebonyi State due to various alleged infractions and mismanagement of the programmes by the State Government.

This is as it accused the State Government of misappropriation of funds from various donor agencies by government officials.

Following the threats, the Federal Government through Secretary to the Government of the Federation (SGF), Boss Mustapha, has written to Governor David Umahi to wade into the matter.

This is as it noted that the alleged misappropriation could smear the image of the country and foreclose future interventions by the bank not only to the State but the entire country.

The letter dated 31st of August 2022 and received at the Ebonyi State Liaison Office, Abuja on September 1, 2022 was signed by one David Attah, a Director at the SGF’s office on behalf of Mr  Mustapha.

The SGF in the letter listed the implementation agencies set to be shut down to include: Ebonyi State Community Based Social Development Agency (EB-CSDA), FADAMA, NG CARES and Micro, Small and Medium Enterprises (MSMES).

The letter reads “I am to convey the modest compliments of the Secretary to the Government. of the Federation and have the honour, to draw your Excellency’s attention to a report which revealed plans by the World Bank’s Project Implementation Agencies to shut down their offices in Ebonyi State.”

“The decision is sequel to the alleged non-payment of counterpart funds, as well as misappropriation of funds of donor agencies by officials assigned by the State Government, amongst other sundry reasons.

The SGF said that ‘according to the report, the Federal Government’s NG-CARES Program funded by the, World Bank to alleviate the Impact of COVID-19 pandemic on citizens is yet to kick-start in the State despite the release of the first tranche of three million Dollars ($3m) In February, 2022, by the Bank.

“Additionally, ‘EB-CSDA, FADAMA and MSMEs beneficiaries are owed over twelve'(12) months arrears of salaries since July, 2021.”

“Consequently, the World Bank initiative designed to alleviate poverty and improve the quality of life of residents of the State stands to be scuttled with the non-payment of counterpart funds and other obligations.”

“This is even as the alleged anomalies In funds management could smear the image of the country as well as foreclose future intervention efforts by the bank and other global financial institution,” Mr Mustapha said.

The SGF therefore urged the governor to, in view of the dire consequences posed by the development, wade into the highlighted concerns with a view to addressing the matter.

Meanwhile, some staff of the projects in the State have lamented the non-payment of their salaries of over 15 months by the State Government.

These Staff, who were saddled with the responsibility of executing  the World Bank projects, designed for the elevation of vulnerable households, farmers and Micro businesses affected by the COVID-19 pandemic, are undergoing hardship due to their present economic situation.

They accused the State Government of being insensitive to their plights and diversion of World Bank funds, designed for the improvement of the well-being of Ebonyi people.

They also lamented that they are presently facing the burden of heavy indebtedness, inability of their children to go back to school, ejection from their rented apartments and deteriorating health conditions.

According to the aggrieved Staff who did not want to be named for fear of victimisation: “The salary arrangement was that the contract staff will be on monthly salaries while the seconded staff (Staff from the State Civil Service)  will be on monthly productive allowance.

“The Governor’s decision to pay the Staff peanuts against the better working condition arranged by the World Bank and obtainable in other States in the country is now generating tension among the three  staff’ platforms.

“There’s high suspicion that the N900 million has either been tampered with or completely disappeared through the Commissioner for Finance who is the lead signatory to the Consolidated Fund Account which it was paid into.

“The World Bank has been engaging the Governor to release the fund for the commencement of the program but to no avail.”

They urged the “World Bank to consider the prevailing harsh economic situation in the country and think of the way of coming to the rescue of the Staff of the three platforms (FADAMA, MSME, and EB-CSDA).

“World Bank should demand for the refund of the N900m NG-CARES program fund from the State or step up efforts to recover the money at source from FAAC and directly pay the staff and suspend the implementation of the program in the State till the exit of the present Government.”

The aggrieved staff further alleged that contrary to the World Bank arrangement, “the Governor has directed that the NG-CARES be shared to the APC candidates, Divine Mandate members, religious groups, market women groups, unregistered farmers as against the World Bank guideline, which stipulated the process of selection of beneficiaries and it is always based on demand-driven and verifying processes.

“It is surprising that after owing  the Staff for 15 Months from July 2021, the State Government now made a U-turn and came up that it was going to pay Zero Productivity Allowance to seconded staff and 30% salary range to contract staff, instead of the World Bank documented salary range of 60% already agreed on the inception of the program,” they further alleged.

Reacting to the development, the Chairman of the program Steering Committee and Commissioner for Finance and Economic Development, Mr. Orlando Nweze, denied being a signatory to any Government Account, including the World Bank assisted project.

He also denied that the State Government has misappropriated any funds in the State.

“First thing first, I am not a signatory to any Government account, NG Cares inclusive. It is patently false that any World Bank fund has been tampered with or is missing in Ebonyi State.

“Anybody claiming such should provide evidence and be ready to defend such an accusation in a court of law. The fund as approved and appropriated in the 2022 budget is intact and when spent will be in line with such.”

On the non-payment of the staff salaries, the Commissioner for Finance noted that the recruitment process was amended by Ebonyi State Government and payment processes have commenced.

“The second phase was implemented in September 2022. This was done under the MSME platform. A total of 3480 small business owners benefited from this phase. This was also implemented with funds from the Ebonyi State Government. The third phase will be implemented in October 2022.” 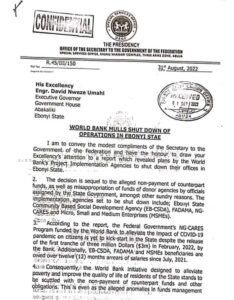 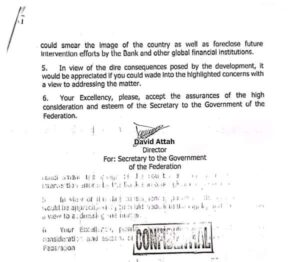