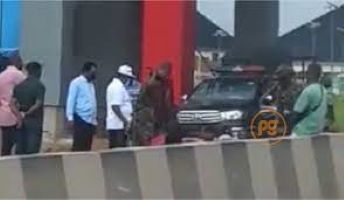 Governor David Umahi is again in the news for the wrong reason following a video which trended online on Tuesday in which he was accused of ordering soldiers to flog some civil servants in the State.

The video was said to have been first shared by human rights activist, Professor Chidi Odinkalu, on his Twitter handle.

In the video, the governor’s car could be seen with some of his security aides standing and watching the soldiers flogging some person’s lying on the ground.

The incident, it was learnt, happened at the new airport being built by the state government at Onueke, Ezza South Local Government area.

Professor Odinkalu, in the text accompanying the video alleged that the soldiers flogged people, who he claimed were civil servants for coming late to work.

He wrote: “So, today in Ebonyi, @GovDaveUmahi went for a project inspection & then instructs the soldiers to flog – yes flog! – civil servants who arrived late. Not done, Dave Umahi supervised the flogging. Tomorrow, he’ll be rewarded with seat in  @NGRSenate.”

The video has drawn wide condemnations from Nigerians as it went viral.

I didn’t order the flogging – Umahi

Mr Umahi, has however denied being responsible for the flogging of the persons in the video.

He made the denial in a statement by the Commissioner for Information, Uchenna Orji.

The governor who described the controversial video as doctored and manipulated, however, disclosed that the incident was an aborted attempt by miscreants to block the Airport gate in the guise that they were enforcing a non-existent sit-at-home order.

The statement read: “Our attention has been drawn to a doctored footage purporting to be civil servants rolling on the ground and being flogged by security personnel in the presence of the Governor of Ebonyi State while on  inspection at the Government House gate, Abakaliki.

“We wish to inform members of the public that the purported footage is a video manipulation of an aborted attempt by miscreants to block the Airport gate and inflict fear on those working  at the on going International Airport and possibly embarrass the Governor who was on a routine inspection visit to the Airport project, in guise that they were enforcing sit-at home- order at the premises of the Airport on Tuesday, 4th October, 2022.”

“It would be recalled that miscreants had in the past tried to attack those working  at the airport site and their plots were neutralized.”

“It is to be noted that no civil servants or employees whatsoever  have been recruited to work in the airport and so no civil servant was flogged at the airport gate, contrary to impression in the trending report. We are therefore surprised at the basis of the unintelligent  fabrications of the mischief makers,” he said

Mr Orji noted that there is no amount of blackmail that can distract the governor who had visited the airport to carry out his routine inspection of projects.

“Regular inspection of projects is  one the reasons why we pride with quality assurance in our policy of monitoring and evaluation in government businesses.”

The Commissioner urged members of the public to discountenance the manipulated trending video as it is the handiwork of enemies of progress.

Lately, Governor Umahi has been accused of a series of dictatorial tendencies and actions in the governance of Ebonyi State.