By EditorOctober 7, 2022No Comments27 Mins Read 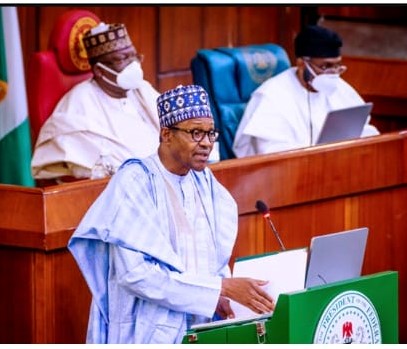 President Muhammadu Buhari has presented a budget of N20.5 trillion for the 2023 fiscal year.

The President laid the budget before a joint session of the National Assembly on Friday.

Addressing the lawmakers, President Buhari described the 2023 appropriation as a budget of “fiscal sustainability and transition.”

He said the budget “reflects the serious challenges currently facing our country, key reforms necessary to address them, and imperatives to achieve higher, more inclusive, diversified and sustainable growth.”

He also said: “A total expenditure of N20.51 trillion is proposed for the Federal Government in 2023. This includes N2.42 trillion spending by Government-Owned Enterprises.

“We expect total fiscal operations of the Federal Government to result in a deficit of N10.78 trillion. This represents 4.78 percent of estimated GDP, above the 3 percent threshold set by the Fiscal Responsibility Act 2007.

“As envisaged by the law, we need to exceed this threshold considering the need to continue to tackle the existential security challenges facing the country.

“Over time, we have resorted to borrowing to finance our fiscal gaps. We have been using loans to finance critical development projects and programmes aimed at further improving our economic environment and enhance the delivery of public services to our people.

“As you are aware, we have witnessed two economic recessions within the period of this Administration. A direct result of this is the significant decline in our revenue-generating capacity.

“In both cases, we had to spend our way out of recession, resulting in higher public debt and debt service. It is unlikely that our recovery from each of the two recessions would have been as fast without the sustained government expenditure funded by debt,” President Buhari stated.

Buhari, however, urged the leadership of the National Assembly to ensure that the budget presented, “which includes those of the GOEs”, be returned to the Presidency when passed.

“The current practice where some committees of the National Assembly purport to pass budgets for GOEs, which are at variance with the budgets sanctioned by me, and communicate such directly to the MDAs is against the rules and needs to stop,” he added.

Below is the full text of the President’s  Speech to a joint session of the National Assembly in Abuja:

III. reforming the taxation of securities lending and real estate investment trusts to spur increased investments on our capital markets;

House of Representatives for your engagement, support and contribution to these successes, which history will remember us all favourably for.

THEME AND PRIORITIES OF THE 2023 BUDGET

budgets sanctioned by me, and communicate such directly to the MDAs is against the rules and needs to stop.

Office of the Federation, who have worked hard to achieve early submission of the 2023 Appropriation Bill.

I thank you most sincerely for your attention. May God bless the Federal Republic of Nigeria.