Reactions trail large crowd of women for Tinubu in Imo

By EditorOctober 7, 2022No Comments3 Mins Read 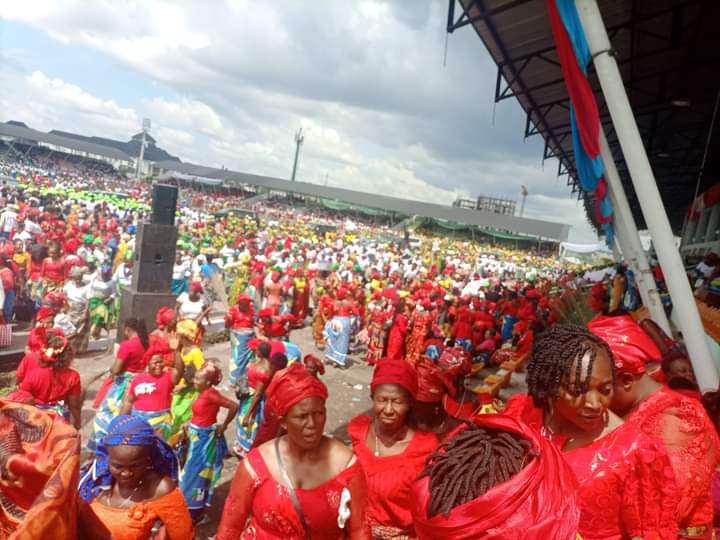 Reactions have continued to trail the mammoth crowd that greeted the South-East rally for the presidential candidate of the All Progressives Congress, APC, Bola Tinubu, last Wednesday at Ndubuisi Kanu, Square in Owerri, Imo State.

Some residents in Owerri, who on Friday, spoke to Ikengaonline about the event wondered how thousands of APC women, stormed Imo, for APC, at a time the clamour for the Igbo presidency has gained momentum.

At the centre of the battle for the actualisation of Nigeria’s presidency of Igbo extraction, ahead of 2023 is the Labour Party, presidential candidate, Peter Obi, whose supporters under the name “Obidient movement” had taken their rallies across the country.

Many argued on what could have inspired the women to boldly declare their support to work for the victory of the presidential candidate of APC, Tinubu, from the South-West region instead of Obi, who is from the South-East.

However, opinions remain divided on whether the women would support Tinubu on the day of the election or had come out to find their daily bread.

Mr Chinedu Okpara, of Enlightenment Platform for Youths, EPY, said: “Political rallies cannot guarantee you that you will win the election. What you see during the rally is different from what will happen on the day of the election. These same women will attend other political rallies. It is about who will outsmart each other.”

The National Vice Chairman South-East, African Democratic Congress, ADC, Chilos Godsent, cautioned: “We call on Igbo women to desist from being used as a political tool. The crowds are rented. They are not authentic. They were brought from different parts of the states and given money.”

Speaking also, the Imo State Publicity Secretary of the All Progressives Congress, APC, Cajetan Duke, however differed in his opinion: “We have superlative achievements at the federal and state levels. We are not in competition with the opposition and on the day of the election we will display our scorecards and Nigerians and Imolities will judge.

“They are afraid to see the women. They have not seen the youths or students. It has shown that APC has been accepted in Imo and Nigeria at large. What we have is disgruntled opposition in Imo.”

“These rallies will not define the election. They are using it to influence people. I want anybody serious to win the election to the grassroots and do the campaign. APC has been rejected and it’s a failed party. They should forget 2023,” Ebere H. Ako, a resident and activist who lives along Egbu Road in Owerri,  said.