5 persons found dead in their room in Enugu community

By EditorOctober 9, 2022No Comments2 Mins Read 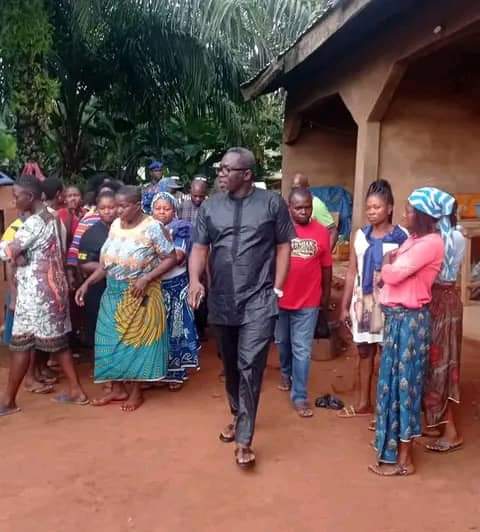 Hon. Solomon Onah on a condolence visit to the bereaved family

The people of Amutenyi, Obollo-Afor Community in Udenu Local Government Area of Enugu State, on Saturday received with shock the news of mysterious death of five family members including a wife.

An eye witness, Mr Sunday Ebonyi, told Ikengaonline, that the incident has thrown the entire community in a devastating and mournful mood.

“It was early morning on Saturday when the husband of the deceased, Rev. Adolphus Odo, came back from where he spent the night  to discover that the doors of the room were still locked and his wife, two children and two relatives of the wife were nowhere to be found.

“He looked for them around the neighborhood but they were nowhere to be found.

“After searching for them around without any success himself and the people in the neighborhood decided to break the door only to discover that, the five persons inside the room were dead,” he said.

According to him, there were white foam in their mouths when they were discovered dead, adding that  no one was suspecting any foul play in their death.

“For now nobody is being suspected because they are no longer alive to give details of what they ate or what transpired,” he said.

He confirmed that, their bodies have been taken to Enugu for autopsy and further investigation.

Meanwhile the Chairman of Udenu Local Government Council, Hon Solomon Onah, has visited  the family of the deceased to see things for himself and to commiserate with the family.

He has also ordered for immediate investigation and autopsy to ascertain the cause of the death.

A senior police officer at Obollo-Afor Police Division told our reporter on condition of anonymity that investigation has commenced on the matter.