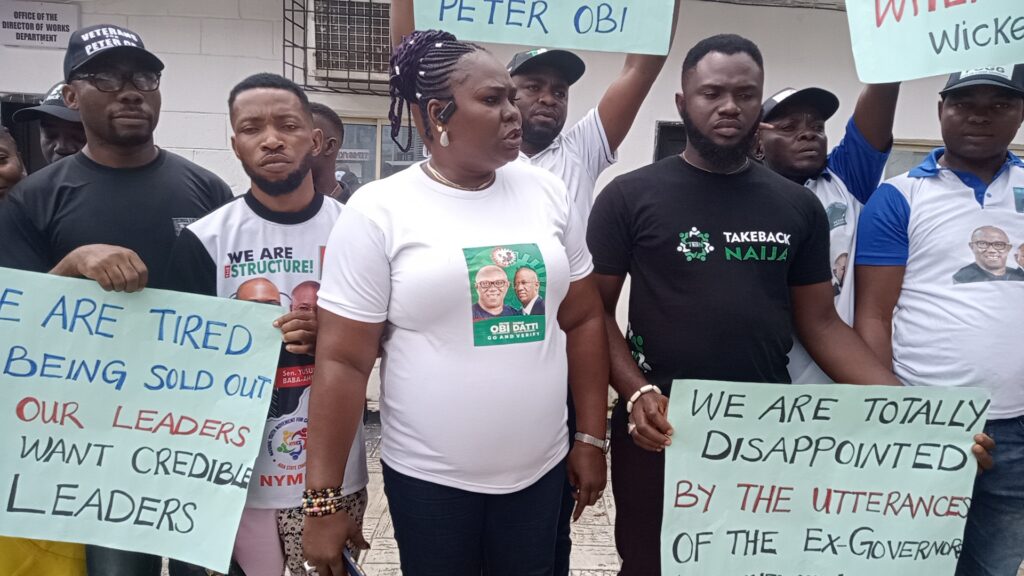 Former Governor of Imo State, Chief Emeka Ihedioha, has come under more fire over his recent comments against the presidential flag bearer of the Labour Party, Peter Obi, as a coalition of pro-Obi groups in Abia, has called for his head.

The coalition demanded unreserved apologies from Ihedioha which must be published in national dailies as well as television stations and radio houses.

According to the pro-Obi groups, Ihedioha has insulted the entire Igbo race, and should atone for his sins.

The visibly enraged Obi’s supporters who staged a protest Monday in Umuahia, said that Ihedioha had lost the respect and goodwill of Ndigbo.

The group, Coalition for Peter Obi (CPO), expressed disappointment over the comments credited to the former Imo Governor, but reminded him that he had dug his political grave.

Ikengaonline recalls that Ihedioha had in a viral video while addressing his Mbaise kinsmen during their New Yam festival in Ghana, allegedly said that “any Igbo who votes for Obi or against Atiku Abubakar of the PDP is a saboteur.”

He was also quoted as saying that only PDP and APC are the serious political parties in Nigeria, and that only the  emergence of  Atiku as Nigeria’s President in 2023 would pave way for the actualisation of President of Igbo extraction thereafter.

Ihedioha has, however, denied making such comments, claiming that his remarks were twisted.

Despite his denials, Obi’s supporters have insisted that the former Governor cannot dissociate himself from the viral video, dismissing his  denial as an afterthought.

“What he said was a general insult to Ndigbo and millions of Nigerian youths who believe in Obi,” the coalition insisted.

The coalition which converged opposite Umuahia North Local Government headquarters carried placards with various inscriptions such as: “Ihedioha must atone for his sins;” “we are disappointed in Ihedioha;” ” Ihedioha is the real saboteur;” among others.

They said it was too shameful that a former Governor and a high profile Igbo politician who had hitherto been held in high esteem could easily speak against the interest of his fellow Igbo because of selfish gains.

Speaking during the protest, Abia State Coordinator of CPI, Madam Matilda Anyamele, said that Ihedioha had lost the goodwill of Nigerian youths who had all along thought he was for the masses.

She said that the anti-Obi comment had revealed his true identify as a self-centred politician who could easily sacrifice the interest of his people for a pot of portage.

“His comments are products of selfishness; sabotage of his own people; and a confirmation of his love for stomach infrastructure,” she said.

The coalition declared that the swelling nation-wide support for Obi was based on his antecedents, and vowed to mobilise voters for him in 2023.

CPO cautioned Igbo politicians against unguarded utterances against Obi’s political ambition, declaring that the masses are ready for a political revolution that would give birth to a new Nigeria in 2023.

The pro-Obi coalition said the two major political parties in the country have both failed Nigerians, hence, the growing clamour for change and a new normal.

They vowed to end the years of god-fatherism and impunity in next year’s election and rescue Nigeria from political merchants.