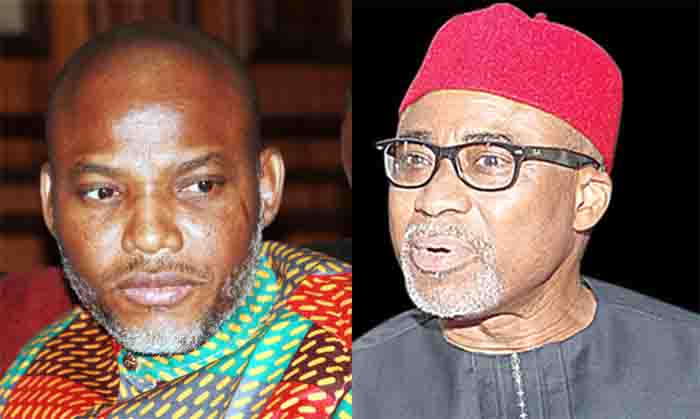 As reactions continue to trail Thursday’s judgment of the Abuja Court of Appeal which discharged and acquitted the Leader of the Indigenous People of Biafra, IPOB, Mazi Nnamdi Kanu, of all counts of terrorism charge leveled against him by the Federal Government, Senator Enyinnaya Abaribe, has said that Kanu’s release would help restore peace to the South-East.

Similarly, Senator Theodore Orji representing Abia Central has hailed the judgment which he described as “landmark” and image boost to the the country.

The duo in their separate reactions, urged the Federal Government to comply with the court decision and release Kanu without further delays.

This is as the Igbo apex socio-cultural youth organization, Ohanaeze Youth Council, OYC has cautioned the Attorney-General of the Federation and Minister of Justice, Abubakar Malami, to tread with caution on his utterance concerning the judgment of the Court of Appeal.

Meanwhile, Kanu’s family has urged President Muhammadu Buhari to honour his earlier promise of not interference with the court proceedings but abide with the court decisions.

Senator Orji in a release by his Liaison Officer, Hon. Ifeanyi Umere, said the judgment would help improve Nigeria’s global image as a country with regard for the rule of law.

On his part, Senator Abaribe in an interview with our Correspondent pleaded with the Federal Government not to appeal the judgment but fully comply with it in the overall interest of the country.

He urged the Federal Government to use the opportunity and resolve agitations ignited by injustice and exclusion in various parts of the country.

He said: “We thank God that Justice has been done by the appeal court. Peace will now return to the South-East and the conflict entrepreneurs who have besieged the South-East and made life difficult for our people will be put to shame.

“We implore the Federal Government not to contest the judgment but to seize this opportunity to resolve all the agitations in the South-East and other parts of Nigeria due to injustice and marginalization.”

The release by Senator Orji read in part: “It’s a landmark judgement not only for the Judiciary and Democracy but also for the Rule of Law in Nigeria, positioning the country in positive light in the comity of Nations and for the sustenance of the Independence of Judiciary.”

Kanu’s younger brother, Prince Emmanuel Kanu who spoke with Ikengaonline said he expected President Buhari to simply remember his promise to Igbo delegation and honour his own words.

He urged the President not to heed deceptive advice from any quarters against complying with the court order.

“I hold Mr President by his own words. Over six months ago when Igbo delegation met with him, he promised not to meddle into the affairs of the court, promising to allow the rule of law.

“Now that the rule of law has taken place, I expect him to keep to his words.”

He further noted that full compliance with the court judgment would help to douse the rising tension in the South-East.

“My prayer is that the Federal Government should harken to the judgment and and obey it completely.

“It will help to bring peace. As soon as he is released, there won’t be any sit-at-home again. Then genuine negotiations will start.

“Nnamdi Kanu is not asking for too much. He wants justice for the people. He is not the problem that Nigeria has; he is only part of the solution but those in power don’t want to realise this simple truth.”

This is as Kanu’s Special Counsel, Mr Aloy Ejimakor, has knocked Malami over the AGF’s response that new counts of charge could be preferred against Kanu.

Ejimakor argued that no new charge against Kanu would hold water because his “abduction and rendition from Kenya,”  were in themselves, an illegality.

The statement read in part: “The position of AGF Malami on the Court of Appeal judgment regarding Nnamdi Kanu is flatly wrong and it is perverse to boot.

“If the FG refuses or stalls on releasing Kanu solely because it desires to levy further or new charges, it will amount to a burgeoning holding charge which is impermissible in our jurisprudence.

“Further, no new charges can stick against Kanu because, in the present circumstance, the extraordinary rendition is an abiding factor that has created a permanent barrier to his prosecution.

“The judgment of the Court of Appeal has therefore, grandfathered a continuing lack of prosecutorial jurisdiction that will, in the interim, be very hard to overcome.

“Thus, before the levying of any new charges can have a toga of legality or chances of conferring prosecutorial jurisdiction, Kanu has to be released first. Anything to the contrary will be nugatory,” Ejimakor averred.

OYC in a statement by its President General, Igboayaka. O. Igboayaka, lambasted Malami for saying that Kanu was not yet acquitted by the court.

Malami, had, in a statement signed by Dr Umar Jibril Gwandu, said the “Appeal Court only discharged Kanu and did not acquit him.”

Malami’s statement had read: “The Office of the Attorney General of the Federation and Minister of Justice has received the news of the decision of the Court of Appeal concerning the trial of Nnamdi Kanu. For the avoidance of doubt and by the verdict of the Court, Kanu was only discharged and not acquitted.

“Consequently, the appropriate legal options before the authorities will be exploited and communicated accordingly to the public.”

Ohanaeze youths frowned at the position of the AGF which, according to them, is capable of generating ethnic tension in the country.

OYC statement made available to Ikengaonline read in part: “Why would Malami insist that the Nigerian Government will pursue and explore other options to pursue Nnamdi Kanu trial after Thursday 13th October 2022 when a three-man panel of the Court of Appeal discharged and acquitted him?

Igboayaka urged AGF Malami to “stop hitting the legal battle between Nnamdi Kanu and Federal Government but embrace the political solution initiated by Prof. George Obiozor which President Mohammadu Buhari has considered and accepted as a means to reintegrate Old Eastern Region to heal the wounds inflicted on Biafrans that have lingered since 1966-2022(57yrs).”

“AGF Malami should bear in mind that if his personal idea is to pursue the case he must make necessary arrangements to send Nnamdi Kanu back to Kenya or Britain and follow the best legal International process to bring Nnamdi Kanu back to continue his trial.

AGF Malami utterance is evident that he doesn’t understand the time and season Nigeria is facing, with the fractured and disjointed Nigeria of multi-ethnicity crisis. Hitting on Nnamdi Kanu case is indirect way of calling for civil war.”