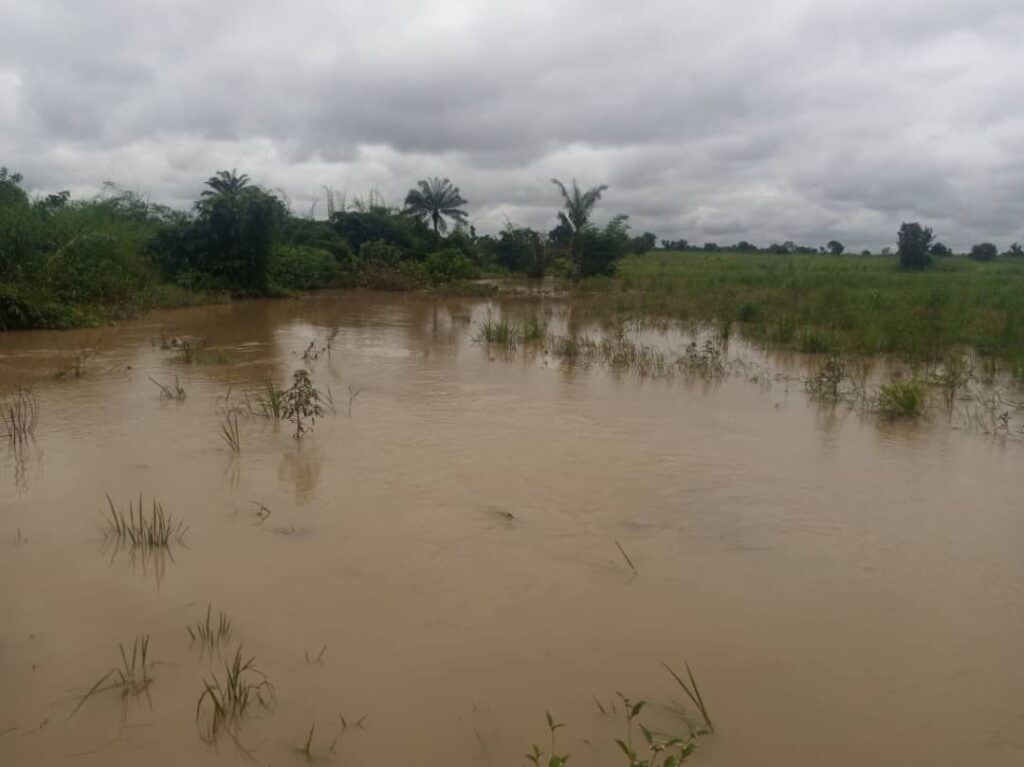 Farmers in Ebonyi have cried out to Ebonyi State Government and other agencies of government for help over a flood which has destroyed many hectares of rice farms.

The situation, which occurred just as the farmers were about to commence harvesting of the rice, it was gathered, has led to astronomical increase in rice prices at the Abakaliki rice mill as the supply of the product has greatly reduced in the market.

The flood, which came as a result of the unabated heavy rainfall, has caused a lot of damage to the local farmers who are counting their losses following the natural disaster.

Not less than thirty rice farmers from Ofutu, Onuenyi and Enyadulogu villages, all in Nduegu Okpuitumo Community, Abakaliki Local Government Area of the state lost over 10 hectares of rice to flooding last week.

In Abakaliki town, a rice farmer, Ikechukwu Mgbabor, said he lost over 3 hectares of his rice farm to flooding.

Mr Mgbabor, who conducted Our Reporter round the destroyed rice farm, said he spent over a million naira on the farm and was on the process of harvesting the rice when the flood came and swept everything away.

The farm was still submerged in the flood water when Our Reporter visited the farm located off the Enugu-Abakaliki Highway with Mr Mgbabor on Sunday.

Mr Mgbabor said: “I started harvesting it three days ago, after harvesting it, we were threshing it, we were still working when all of a sudden we just saw a heavy flood coming to our direction in the farm. It was surprising because there was no rain at that time we don’t know where it came from. We just had to run for our dear lives.

“We have already harvested about half of the farm but the flood carried it all. I can’t even estimate the loss due to the flood, I can tell you that I have spent at least N1.5m in the farming alone.”

Mr Mgbabor said government should come to the aid of farmers who have lost so much to the flood this year as a means of encouraging them to continue farming.

He said the situation is demoralizing to the farmers.

“Government should look for a way to help us. We have lost so much to the flood this year and it is dampening my  my spirit and urge for farming.

Mr Mgbabor, who lamented the increase in the price of farm supplements such as fertilizers, called on government at all levels, to find ways of making them affordable to the farmers.

“The cost of everything has tripled in the market, for example we used to buy a bag of fertilizer at N8000 but this year’s it is N28,500. Government should help in subsidizing it for us.

“The labourers used to collect N1300 last year but this year we are paying them N3000 for a day’s job. We had over 38 workers yesterday who worked on the farm and we paid them.

“Even the seedlings for planting, we used to buy N17,000 last year but this year we bought N30,000. If government can come in to help us, it will encourage us to go back to farming but for now, I am not sure if I will go back to it next year.”

One of the victims of the Nduegu Okpuitumo Community, Mr Alexander Ojima, narrated that rice farmers living in the hinterlands especially those from Izzi area in Abakaliki witnessed the ripple effect of the flood which was disastrous.

He lamented that the situation was made more dire for most of the farmers because many of them took loans from people and cooperative firms for the farm work.

He stressed that the development has left them hopeless and depressed.

He described their experiences as pathetic and traumatic stating that despite the damage, farmers in hinterlands are hardly encouraged whenever they faced flood disaster.

Another victim, Mr. Obiade Dennis, of Ofutu Nduegu Okpuitumo said he has been left completely demoralized following the ugly incident as his rice farm which was badly hit by the flood is his major means of survival over the years.

“I live by what I gain from farming. I am a known farmer in my Community. I have committed so much time and resources into farming, saying I am not affected by this development will be an understatement.

“Although, this has been a usual occurrence during farming season, this year’s own took us unawares. Many have not even taken a pin from their farm before the flood came and swept away every single rice seed in their farms.”

Mr Obiade called on the State government, Federal Government and indeed other good-spirited individuals to come to their aid.

Another farmer, Mr Christopher Mkpuma, lamented that he was particularly worried because most of the rice destroyed were already cut down and waiting to be processed/sifted before the flood came and swept away everything, with the owners struggling to save them but all to no avail.

Meanwhile, at the Abakaliki Rice Mill, it was gathered that the flooding has led to scarcity of rice for the teeming traders who patronize the mill from various parts of the country and the west African region.

The situation, it was gathered, has led to sharp increase in the price of rice as demand currently outweighs supply in the market.