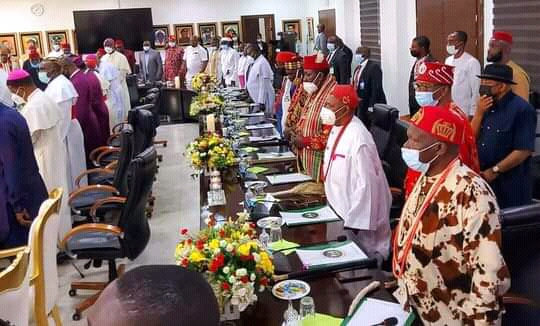 South-East Council of Traditional Rulers; and representatives of Archbishops and Bishops of Igbo extraction, have called for the immediate and unconditional release of the Leader of the Indigenous People of Biafra, IPOB, Mazi Nnamdi Kanu.

The demand is coming  five days after the Court of Appeal sitting in Abuja, discharged him of all seven counts of terrorism charge preferred against him by the Federal Government.

This is contained in a press statement issued Tuesday by the monarchs and revered clerics.

They argued that the release of Kanu would help restore peace in the South-East.

The statement read in part: “In furtherance of this, we have also supported the call for the unconditional release of Mazi Nnamdi Kanu by the Federal Government to douse the current tension across the South-East and create an atmosphere for collaboration towards a constructive resolution of the issues.

“We note the Opinion emanating from the United Nations Working Group on Arbitrary Detention, regarding the on-going legal action instituted by the Federal Government of Nigeria against Mazi Nnamdi Kanu, which was issued on 20th July 2022. Among many recommendations or requests made to the Federal Government, the Opinion called for the immediate and unconditional release of Mazi Nnamdi Kanu, who has been in detention for over one year, following his rendition from Kenya in June 2021.

“We also note media reports confirming that on Thursday, October 13, 2022, a three-man panel of The Court of Appeal in Abuja led by Justice Hanatu Sankey held that the Federal High Court lacks the jurisdiction to try Mazi Nnamdi. Kanu on the grounds of his rendition to Nigeria which violates the protocol on extradition and the OAU convention, and subsequently discharged Mazi Nnamdi Kanu.

“We welcome this judgment and assert that the wisdom of the Appellate Court presents a timely and an unprecedented opportunity to overcome the challenge of trust that has obstructed the path to peace; and opens the window to winning the hearts and minds of the people.

“We, therefore, unequivocally support the call for the immediate release of Mazi Nnamdi Kanu in line with the unanimous judgement of the Court that his extradition and subsequent trial was illegal, and the lower court had no jurisdiction to hear the case.

“In conclusion, the march towards peace and the restoration of normalcy in our society and economy requires the collective action of all people of God. We are confident that all Nigerians will rise to the summons of History and act with courage, conviction and integrity.”

According to the statement, the Joint body has been consistent and persistent in its call for all stakeholders not to relent in the pursuit of peace building and resolution of security challenges in the South-East based on justice, equity, fairness, love, mutual understanding, and respect of all persons.

“The South-East Council of Traditional Rulers and Representatives of Igbo Archbishops and Bishops was established in fulfillment of the temporal and spiritual leadership mandates inherent to the respective offices of the traditional rulers and church leaders as the moral compass of our constituents, as well as advisors, guides, and mediators in the lives as citizens of our dear nation, Nigeria,” the statement added.

In the recent past, the Joint Body has undertaken extensive and intense behind-the-scenes consultations with all stakeholders to broker a permanent, regionally coordinated restoration of the South-East to the status as the most peaceful and progressive sub-national zone in Nigeria.