By EditorOctober 20, 2022No Comments5 Mins Read 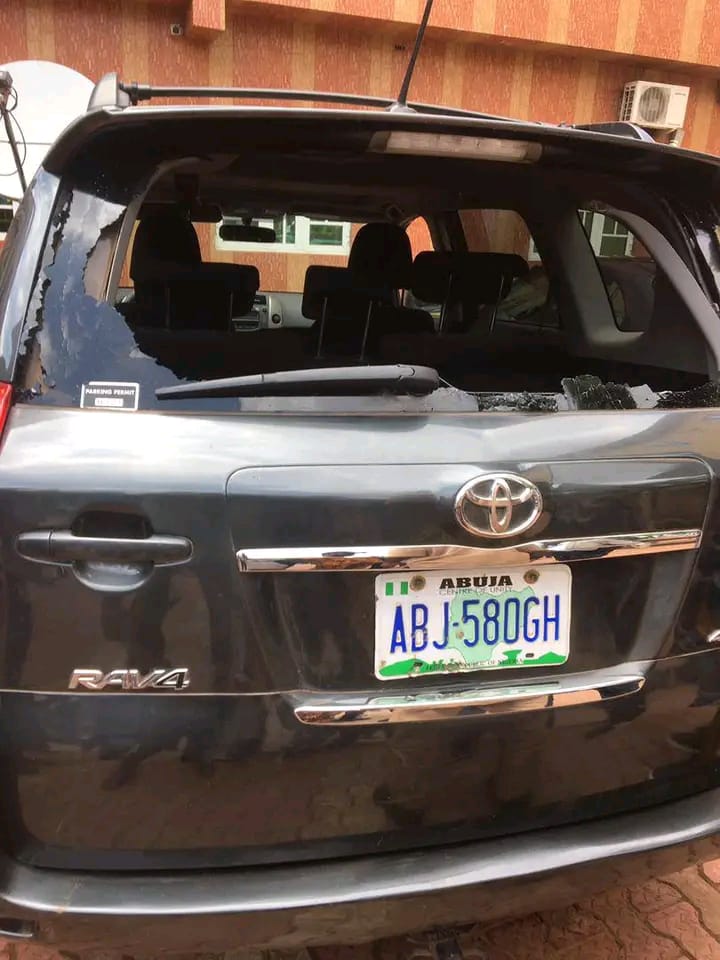 One of Odoh's vehicles allegedly shot at by gunmen

The incident, it was gathered, happened at Iboko, in Izzi Local Government Area of the State.

Mr Odoh confirmed the attack to Reporters in Abakaliki on Thursday.

He claimed the gunmen who attacked him and his team were members of Ebubeagu Security Outfit.

According to him, they shot and damaged a car in his convoy but luckily no one was injured.

Mr Odoh said the attack is a declaration of war on him and his supporters by the state government and the ruling All Progressives Congress (APC) in the State.

He said: “We went to commission a  campaign office. Before we left, I received series of calls threatening me not to go from some persons. Even the DPO of the area called and said I should shelve the visit as he is under pressure over the visit.

“But I said I am the candidate of APGA, I should be able to visit any part of the state that I want to govern. So I went with my security aides and supporters.

“Before we got there, they had already locked up the office with chain to prevent me from gaining access. We met our supporters outside in from of the building and addressed them.

“On our way back they attacked and shot at us but luckily, no one was injured but they damaged one of the cars.

“They have taken the war direct to us and we want the world to understand what is going on. The war has been declared on us and we are going to take the war right back to them.

“We are not cowards, we are not fools. This is not how to run a democracy.  They can’t force anyone on the people. The people of Ebonyi have a right to select their leaders. We have right to reach out to our people.

“I come from a local government, if they continue like this, will Nwifuru (APC governorship candidate) come there to campaign?”

A live stream of the moment of the attack was aired on Facebook by one of the occupants of the Toyota jeep attacked by the gunmen, Laz Ude Eze.

Gunshot could be heard followed by shattering of the rear window of the car as it was in motion.

The Chairman of APC in the State, Stanley Okoro, who is also the Security Consultant to the State Government in charge of Ebubeagu could not be reached for comment.

He did not take numerous calls or respond to text messages sent to his phone lines.

Leo Oketa, spokesperson to the  APC Governorship candidate, Francis Nwifuru also did not respond to messages for reaction.

He noted that no one attacked the convoy of Prof Odoh anywhere in the local government.

He said, rather, it was Prof Odoh’s security aides and thugs who entered the community and started shooting sporadically.

He said in the process, they injured the Coordinator of Izzi Development Centre, Chukwudi Pascal.

According to Mr Nwankpa, in other to cover up for what his aides did, Mr Odoh rushed to the media to accuse Ebuebagu of what they did not do.

He said: “Today, the 20th day of October, 2022, a supposedly revered man in the person of Prof Benard Odoh, in his inglorious quest for power embarked on what I might call a show of force and military might, in Izzi Local Government Area.”

“Prof Odoh, who is the flag bearer of the APGA demonstrated what is the most shameful and inglorious act today, within the democratic spectrum far beyond what was expected.

“Odoh, today, entered Izzi council area with a truck load of DSS, police and his thugs and began to shoot sporadically everywhere, scaring all innocent people trading within the area away. And one of the Coordinators, Hon. Chukwudi Pascal, ran into them and they opened bullets (sic) on his vehicle and shot him on the thigh.

“That action is injustice and is despicably terribly bad and intolerably unacceptable. Chukwudi Paschal, as I speak to you is receiving treatment at the Alex Ekwueme Federal University Teaching Hospital Abakaliki, at the emergency ward.

“We are only praying he does not give up from (sic) the bullet injuries he sustained in the gunshots from Odoh’s thugs.

“This is where we are today. This is why I have invited you to explain all this to you just to put the records in the right perspective. Izzi people are law-abiding people; very hospitable. Ezza people are our brothers and the Izzi nation, is our elder brother.

“And for Odoh to come into Izzi council without notice or any prior information to demonstrate what he has done today, calls for urgent attention,” he said.