By EditorOctober 21, 2022No Comments6 Mins Read 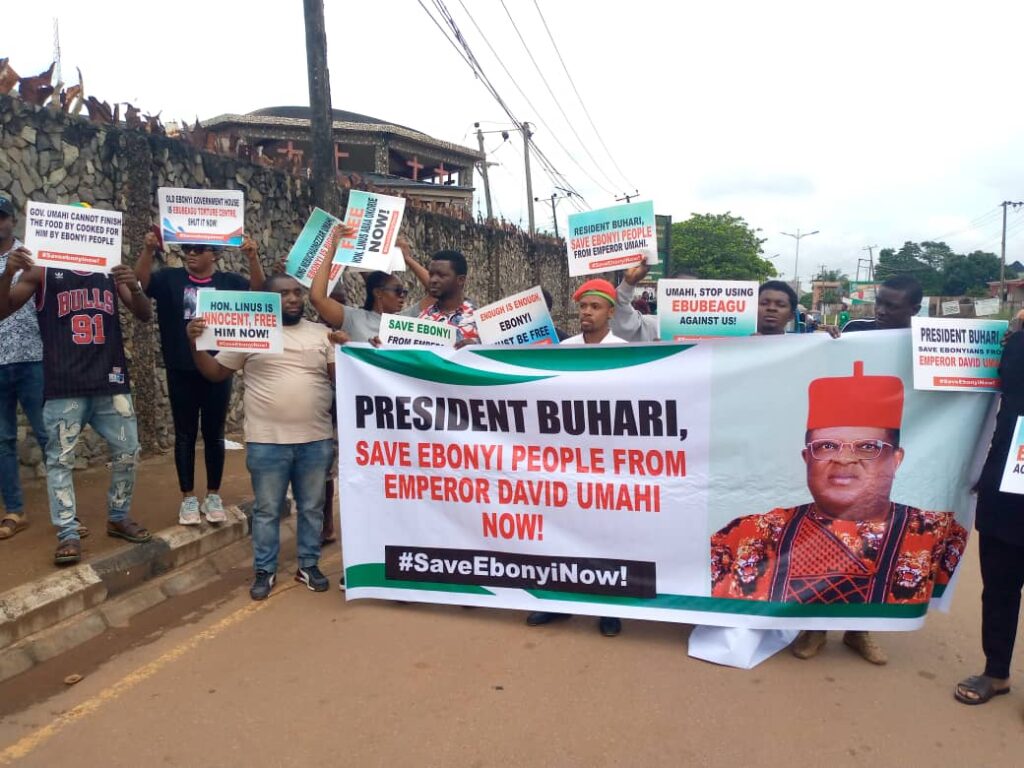 Reactions have continued to trail the alleged attack of the governorship candidate of the All Progressives Grand Alliance (APGA) in Ebonyi State, Bernard Odoh by gunmen.

Mr Odoh, a professor of geophysics was allegedly attacked by gunmen on Thursday in Iboko, Izzi Local Government Area.

His supporters were also said to have been brutalised at the venue of the event he was to attend in the area while one of the cars in his convoy was shot. Its rear window was shattered by bullet.

Mr Odoh, in a statement on Friday appealed for calm from his supporters while appreciating the people for the concerns they expressed over his safety.

On Friday, Save Ebonyi Group, a group based in the state organized a march round the state capital to protest the attack.

Bearing placards they marched round the state capital Abakaliki to express their displeasure with the intolerant and violent attitude of the State Government towards opposition party activities in the State.

Some of the placards bore messages saying: “Hon. Linus is Innocent, Free him Now,” “President Buhari, Save Ebonyi people from Emperor David Umahi Now,” Umahi, stop using Ebubeagu on Us.”

The group, in a statement signed by Ude Eze and four others, noted that it is made up of concerned Nigerian citizens in Ebonyi State promoting peace and participatory democracy.

It disclosed that it was terribly disturbed by the anti-democratic tendencies of the State Government.

“The State has undoubtedly become a war zone orchestrated by State agents under the directive of the governor.

“There has been consistent and shameful disregard for the rule of law, intimidation, abduction and torture of innocent citizens, as well as oppression of the opposition.”

The group called on the Inspector General of Police and National Security Adviser to enforce their regulation on the non-use of regional or state security outfits for election related duties.

The also called for the release of the Labour Party senatorial candidate for Ebonyi South, arrested at the weekend by Ebubeagu and later charged to court by Police.

Governorship candidates of various political parties also reacted to the said the attack.

Chukwuma Nwandiugo, the Action Alliance Governorship candidate  condemned in its entirety the attack on Mr Odoh describing it as barbaric and anti-people and one which does not in any way foster Nigeria’s nascent democracy.

He said: “I believe all candidates (irrespective of party and clan) should be allowed to freely present themselves for Ebonyians to select whoever they want. It’s not a do-or-die affair. This is my understanding about democracy and genuine electioneering process.

“The epoch is constitutionally supposed to be a time for the residents and the electorate to access who they want to lead them based on credibility, integrity and competence.”

“The attack on Prof. Odoh, is strange to Ebonyi politics and does not in any way represent the dreams and chastity of Ebonyi founding fathers, who laboured vigorously and fought for the creation of this state some years ago.

‘’The attack is evil. The attack is undemocratic. The attack is wicked. The attack is alien to our people and, is also capable of heating up the polity. I advise Ebonyi people to reject every attempt by the enemies and all haters of peace of the state, to disrupt the minutest peace currently being enjoyed in the state,” he said.

Spokesperson of the party in the state, Nwanchor Chibuike, condemned the attack describing it as unwarranted, unprovoked, unspeakable and animalistic.

The party called on security agencies, Human Rights crusaders, and all relevant authorities to investigate and prosecute the perpetrators of the heinous crime.

“We wish to also caution the youths against allowing themselves to be used as thugs and touts by politicians as such is not only inimical but deleterious to their lives and that of their loved one,” the party said.

Chairman of Izzi Local Government Area, Steve Nwankpa, said no one attacked the convoy of Prof Odoh anywhere in the local government.

He said, rather, it was Prof Odoh’s security aides and thugs who entered the community and stated shooting sporadically.

He said they injured the Coordinator of Izzi Development Centre, Chukwudi Pascal.

According to Mr Nwankpa, in order to cover up for what his aides did, Mr Odoh rushed to the media to accuse Ebuebagu of what they did not do.

He said: “Odoh, today, entered Izzi council area with a truck load of DSS, police and his thugs and began to shoot sporadically everywhere, scaring all innocent people trading within the area away.

“And one of the Coordinators, Hon. Chukwudi Pascal ran into them and they opened bullets (sic) on his vehicle and shot him on the thigh.

“That action is injustice and is despicably terribly bad and intolerably unacceptable. Chukwudi Paschal, as I speak to you is receiving treatment at the Alex Ekwueme Federal University Teaching Hospital Abakaliki, at the emergency ward.

“We are only praying he does not give up from the bullet injuries he sustained in the gunshots from Odoh’s thugs.”

“This is where we are today. This is why I have invited you to explain all this to you just to put the records in the right perspective. Izzi people are law-abiding people; very hospitable. Ezza people are our brothers and the Izzi nation, is our elder brother.”

“And for Odoh to come into Izzi council without notice or any prior information to demonstrate what he has done today, calls for urgent attention,” he said.

Governorship candidate of the All Progressives Congress (APC) and speaker of the State House of Assembly, Francis Nwifuru, denied responsibility for the said attack.

Mr Nwifuru, who hails from Izizi LGA where they attack took place, described the accusations as another bucket load of facade, to attempt a tumbling blackmail on him.

He said the incident was a self inflicted ordeal adding that accompanying security aides accompanying Mr Odoh and his supporters attacked Coordinator of Izzie Development Centre, Chukwudi Obiya, because he was driving in a branded APC vehicle around in the area.

“The bullet pierced through the door of the car and hit his thigh, thereby inflicting serious injury on him. This can be confirmed by any stretch.

“The members of the public and the good people of Ebonyi State are by this statement implored to disregard in its entirety, the local movie created by members of APGA in Ebonyi State, as they have seen their failure ahead – hence, resorting to cheap blackmail.”

“It is pertinent to note that Rt. Hon. Francis Ogbonna Nwifuru has never and will never resort to any ounce of violence before, during and after the elections, because he has in firm grip, a Divine mandate from the good people of Ebonyi State,” the statement signed by his Media Aide, Leo Oketa said.