Why we are in Abia for special operation – Army

By EditorOctober 22, 2022No Comments4 Mins Read 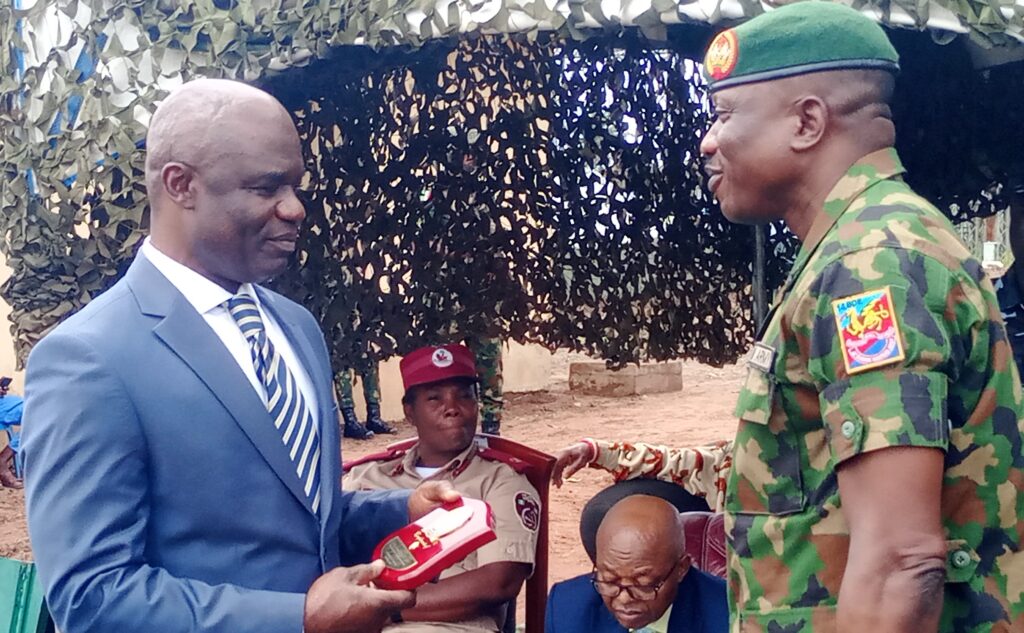 Barely three weeks after it commenced a special operation tagged “Golden Dawn ll,” the Nigerian Army, Friday, shed more light on why it embarked on the exercise.

Commander, 14 Brigade Ohafia, Brig. Gen. A.M Adetuyi, who provided the insight during the formal flag-off of the exercise Friday at Amekpu Ohafia, explained that the objective of the operation was to help improve security in the state ahead of the yuletide.

The exercise, according to him,  is not intended to create panic among law-abiding citizens but to help stem the tide of criminality.

Gen. Adetuyi also said the exercise was to help prepare soldiers and other security agencies participating in the exercise, for the forthcoming general election.

The operation, according to him,  is  one of the military exercises initiated by the Army Headquarters across the country “at this period of the year.”

He said: “It is tailored towards enhancing the security of law abiding citizens in Abia State during the yuletide season and electioneering period in preparation for 2023 general election.

“It should be well noted that the exercise is not targeted at hunting innocent persons within the Brigade area of responsibility, but to protect them.

“As you may begin to witness increased presence of troops on patrols across the State, please bear in mind that the Nigerian Army is only out to ensure a secured environment for the yuletide celebrations and peaceful electioneering activities, in preparation for 2023 general election.

“It will be conducted in collaboration with other security agencies who would be performing their statutory roles, as we could all witness their maximum representation here today.

“Accordingly, the exercise is designed to promote conducive environment for businesses and other socio-economic activities for which Abia State is known for.”

The Brigade Commander further hinted that the exercise would also be conducted with complementary activities including free medical outreach geared towards promoting civil-military cooperation.

“It is aimed at fostering the much needed cooperation between the Nigerian Army and the good people of Abia State,” he said.

“Other  activities earmarked in this regard include educational support to schools in the State, which further underscores the importance the Nigerian Army places on engendering cordiality with the host communities,” he added.

Gen. Adetuyi re-assured residents and visitors to the state of their safety and security during the conduct of exercise expected to end on December 23.

He solicited the support and cooperation of residents for the success of the exercise.

Flagging off the exercise which involved police and Nigeria Civil Defense Corp, NCDC, personnel, Gov. Okezie Ikpeazu, appreciated the military and other security agencies  for their cooperation and unrelenting efforts in tackling security challenges in the state.

Ikpeazu who was represented by his Deputy, Sir Ude Oko Chukwu, expressed belief that the exercise would “add more impetus by the military and other security agencies to further reduce crimes and criminality in the entire state during the Yuletide season and electioneering period leading to 2023 general elections”

The Governor said he was very confident that the exercise would assist greatly in flushing out criminal elements within the nooks and crannies of the state and give law-abiding citizens the deserved peace and tranquility required for socio-economic development.

“We have of recent, observed how our economic activities are gradually being eroded by activities of some criminal elements who hide under various names to intimidate, maim and kill people unjustly.

“Some engaged themselves in kidnapping, armed robbery, cultism and all sorts of violent criminality. I am convinced beyond reasonable doubt that the Nigerian Army and other security agencies are capable of dealing with these criminal elements amongst us during the period of this Exercise GOLDEN DAWN II.”

The Governor, however, urged all the participating officers and men to observe “laid-down rules of engagement and code of conduct, to avoid any action that may infringe on the rights of the citizens and the hosting communities.”

He also urged all residents to cooperate with the troops and other security personnel in the conduct of this exercise and to avoid any face-off with them.

Gov. Ikpeazu assured the Nigerian Army and other security agencies in the state of his administration’s continued support within available resources to enable them carry out their constitutional responsibilities.

Ikengaonline reports that other security agencies including the Police and Civil Defense were participating in the exercise.