By EditorOctober 23, 2022No Comments3 Mins Read 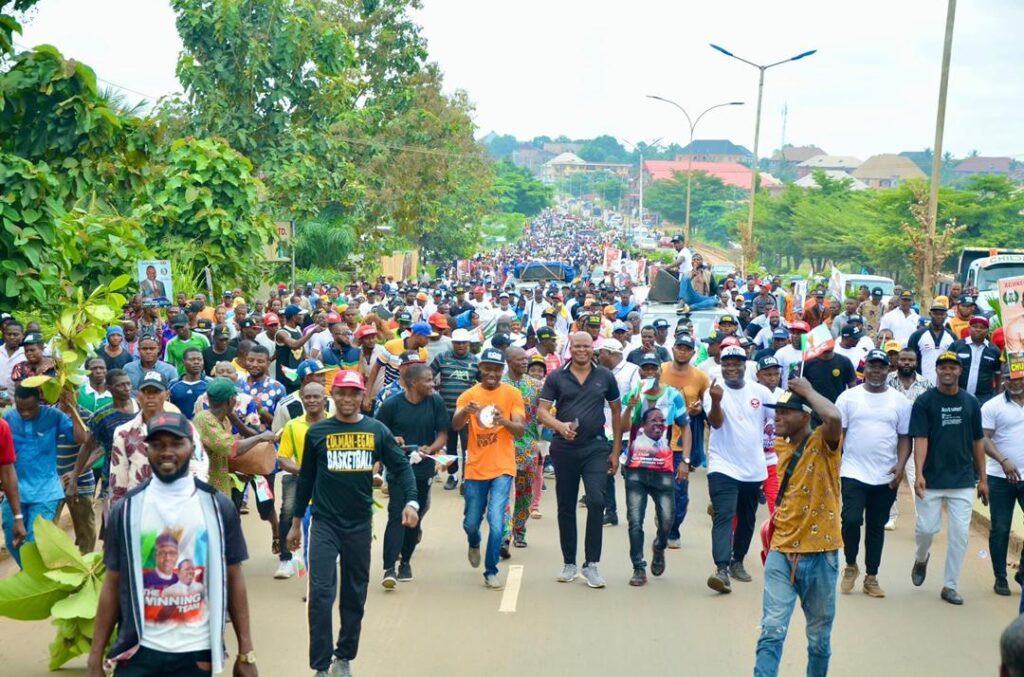 Some of the youths marching for APC gubernatorial candidate, Francis Nwifuru

A sociocultural Organization, Unwuekumenyi United Youths Forum, at the weekend held one million-man march in Abakaliki, Ebonyi State ahead of the 2023 general election.

The group during the march announced its decision to back the gubernatorial candidate of the All Progressives Congress (APC), Rt. Hon. Francis Ogbonna Nwifuru, as its preferred governorship candidate.

In a statement titled, “The position of Unwuekumenyi Youths on the rotation of governorship seat in Ebonyi State,” which was signed by its national president, Uche Ali-Ega, the forum said the march was in support of equity in the state.

The forum also said its decision to endorse Mr Nwifuru of the APC was reached after critical assessments of all the governorship candidates of all the political parties in the race.

The forum noted that having appraised the political developments in Ebonyi State from 1999 till date, it “commends the founding fathers of the state, for their forthrightness and the unwavering belief in equity, justice and fairness, especially as regards the rotation of the seat of Governorship among the three (3) Senatorial Zones in the state.”

It also appreciated governor David Umahi for his massive infrastructural strides in Unwuekumenyi land and for his boldness, honesty and political will in maintaining the power rotation among the three (3) Senatorial Zones in the state, with the governorship position having rotated from the North, Central, South and now, back to the North Zone.

It equally commended political parties in the state, who with respect to the charter of equity, zoned their governorship positions to Ebonyi North Senatorial Zone, particularly to the Izzi clan.

Part of the statement reads: “Having made a critical assessment of all the candidates of various political parties in the state, we hereby unanimously endorse the candidature of Francis Ogbonna Nwifuru, of the APC, as our consensus choice for the 2023 governorship election in Ebonyi State and enjoin other critical stakeholders in the Ebonyi project to do the same.

“We call on other clans and zones in the state to kindly respect the zoning arrangement and rally round Nwifuru, the gubernatorial candidate of the APC in the spirit of equity, justice and fairness, in order not to truncate the dreams of our founding fathers and maintain peaceful transitions in subsequent power rotations to other zones of the state, as being preached by your Excellency our leader.

“We reiterate that being the most populous clans in the state; consisting over seventy per cent (70%) of both landmass and citizenry of the state, insist that this equitable, fair and just decision of returning power to Unwuekumenyi must be upheld, knowing that in the event of breakdown of law and order resulting in injustice, we will be the worst hit.

“We further state that Unwuekumenyi are peace-loving, accommodating and generous. And that we will continue with the already existing inclusiveness in our dealings with our brothers and sisters from other zones, clans and residents in Ebonyi State, before, during and after the 2023 general elections.,” they said.