Youths in Enugu community clash with PDP thugs over billboard

By EditorOctober 24, 2022No Comments3 Mins Read 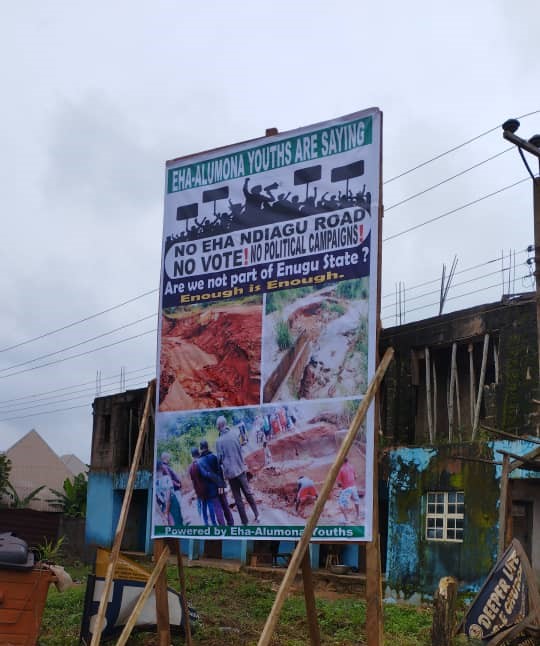 The Ehaluma Youths Association (EYA) in Nsukka Local Government Area of Enugu State have clashed with thugs allegedly working for the Peoples Democratic Party (PDP) over the removal of University of Nigeria Nsukka (UNN) billboard at Eha-Ulo Junction.

One of the youths who spoke to Ikengaonline said that, the fight broke out when the thugs removed the famous UNN billboard and tried to replace it with pictures of the PDP Governorship candidate, Barr. Peter Mba, and his deputy, Barr. Ifeanyi Ossai.

“We were angry with this development and we decided to react immediately by removing their “useless” candidates and returning the UNN billboard intact.

“The UNN is the symbol of Nsukka nation; this is what takes us to the World and we cannot allow any government to abuse it in the name of politics,” he said.

A trader at the junction, who spoke on condition of anonymity said the youths dealt serious injuries to the PDP loyalists.

He said that, the youths who later fled the scene were more angry because of failure of the State Government to complete the only access road started since 2020, even when the government is nearing its end.

“The youths were mad over the PDP billboard more so when they removed that of UNN that has been there since 2004 and they viewed that as insult to, not only Ehalumona people but the University community and Nsukka people in general.

“Again, the people of Ehalumona have suffered neglect in the life of the present administration of a neighboring brother, Gov. Ifeanyi Ugwuanyi, who is from Orba.

“The Eha-ndiagu–Mbu road which he started since 2020 has worsened, in fact, as I speak, the road has cut off, and nobody is happy over the situation we find ourselves in Ehalumona today,” he said.

Meanwhile, the youths of the community has banned PDP from campagning in the area following failure of the government to complete the Eha-ndiagu–Mbu and Agu-umabor roads which were awarded since 2020.

In a signpost mounted at one of the bad portion of the Eha-ndiagu–Mbu road, they lamented the government’s neglect and vowed to resist any further attempt by the ruling party to make a fool of them again.

Mr Anayo Okwor, a youth leader from Eha-ndiagu told Ikengaonline that, the youths have had enough patience.

“We have been used enough; we can no longer pretend about it anymore, we are now ready for them and their thugs,” he said.

He said that following the rainy season, the road has become the worst, adding that they have been cut off from their kinsmen at Eha-Ulo.

“Nobody travels the road except Okada riders who now double their fares because of the worsening condition of the road.

“They now charge exorbitant prices, for example; from Eha-ndiagu to Eha-ulo is now between N1500 and N2000 depending on the rider.

“Incidentally, this is something we used to pay N400 for one person and N500 for two persons, it is as bad as that,” he said.