By EditorOctober 27, 2022No Comments3 Mins Read 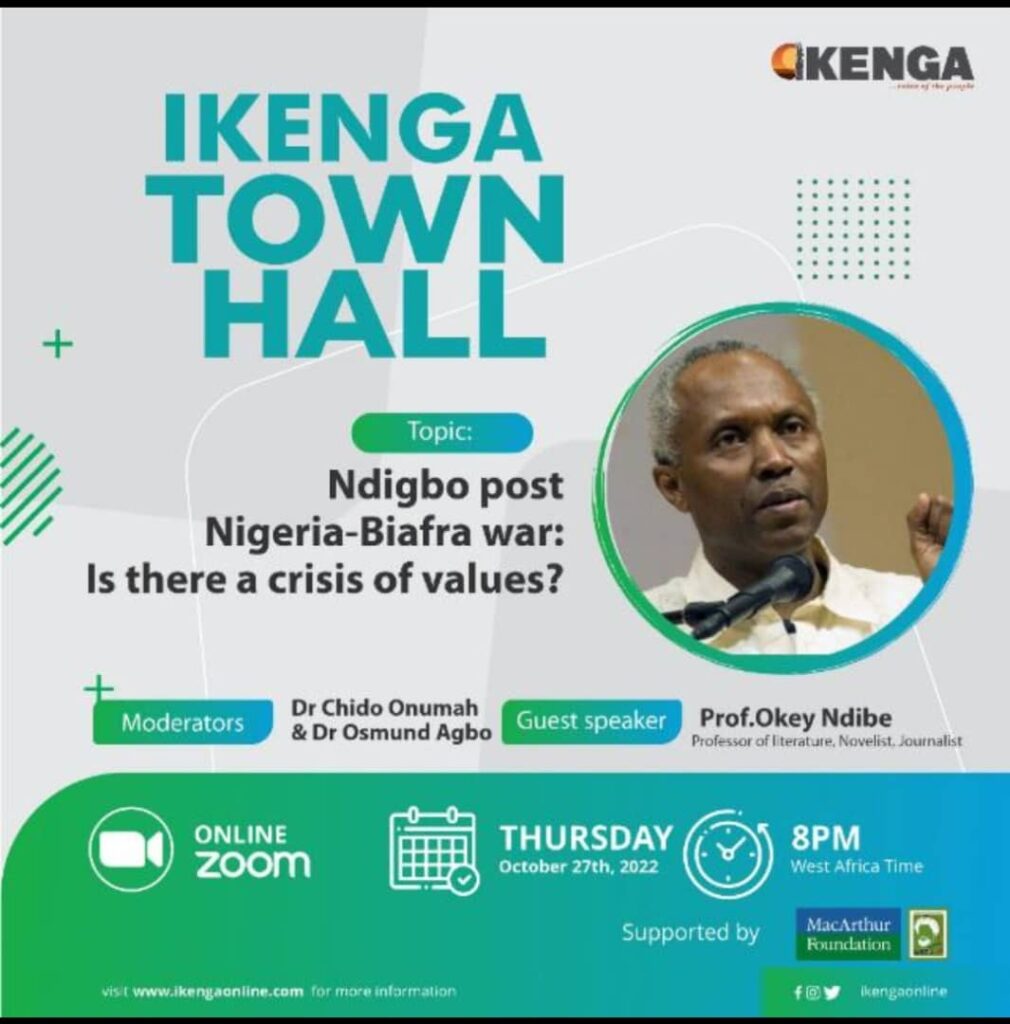 All is set as renowned scholar, novelist and essayist, Professor Okey Ndibe, will tonight (Thursday) the 27th of October, 2022, deliver the Keynote Speech at the Monthly IkengaOnline Town Hall meeting.

Professor Ndibe will speak on the topic, “Ndigbo post-Nigeria-Biafra war: Is there a crisis of values?”

The event is the fourth in the series of the town hall meetings with the first headlined by the immediate past Senate Minority Leader, Enyinnaya Abaribe, in July, the second by renowned political economist, Professor Pat Okedinachi Utomi in August and the third, by the former President General of the apex Igbo socio-cultural organisation, Ohanaeze Ndigbo, Chief Nnia Nwodo, in September.

Our keynote speaker, Okey Ndibe, is the author of two novels, Foreign Gods, Inc; and Arrows of Rain; a memoir, Never Look an American in the Eye (winner of the 2017 Connecticut Book Award for nonfiction); and The Man Lives: A Conversation with Wole Soyinka on Life, Literature and Politics. He’s the 2022-2023 Viebranz Professor of fiction at St. Lawrence University in Canton, NY. He earned MFA and PhD degrees from the University of Massachusetts Amherst and has taught at various universities and colleges, including Brown, Trinity College, Connecticut College, and the University of Lagos (as a Fulbright scholar).

His award-winning journalism has appeared in major newspapers and magazines in the UK, Italy, South Africa, Nigeria, and the US—where he served on the editorial board of the Hartford Courant. He writes a column on the substack platform titled “Offside Musings,” and co-hosts a podcast of the same name.

Ikengaonline is a South-East-focused media platform, which aims at giving voice to citizens of the South-East, and parts of Rivers and Delta states, and highlight the challenges facing the region.

The monthly meetings are meant to discuss topical issues facing the South-East zone of Nigeria in particular, and the nation in general.

Guests are expected to join the Meeting from all over the world and the event will be moderated by Dr. Osmund Agbo and Dr Chido Onumah.

Ikengaonline is part of the Collaborative Media Engagement for Development Inclusivity and Accountability Project, a multi-level intervention for media independence and government accountability, managed by the Wole Soyinka Centre for Investigative Journalism (WSCIJ) and supported by MacArthur Foundation.