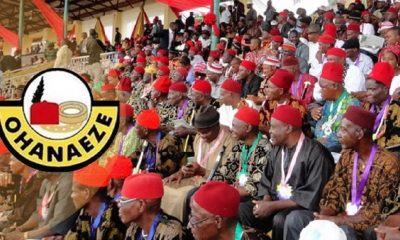 He stated this at the weekend in Enugu in a speech he delivered at  the occasion of 2022 Iriji Festival organised by the state chapter of Ohanaeze.

“May I use this occasion to bring to the attention of Ndigbo about an emerging unpleasant trend which may constitute economic threat to our people.

“It has been observed that the Chinese are cultivating yams and cassava in free houses which they sell in Europe and North America at huge profits.

“Today, we observe with shock in the social media the appearance of made-in-China garri, and made-in China yams,” he said.

Eze said these were emerging signs of threats as yams and cassava are Indigenous root crops of Ndigbo and called on Ndigbo to take advantage of the entire value chain.

“As we have helplessly watched Malaysia take over and make a huge success of the oil palm value chain, should we again leave the yam and cassava value chain to the Chinese while our youths are jobless.

“Ndigbo now is the time for action, ” he said.

He described yam as the king of crops in Igbo culture, adding that, Iriji Festival symbolizes the conclusion of farming season and commencement of another cycle.

“It is an occasion for our people to show gratitude to God for a bountiful harvest. It is an age-long tradition of Ndigbo,” he said.