By EditorOctober 31, 2022No Comments3 Mins Read 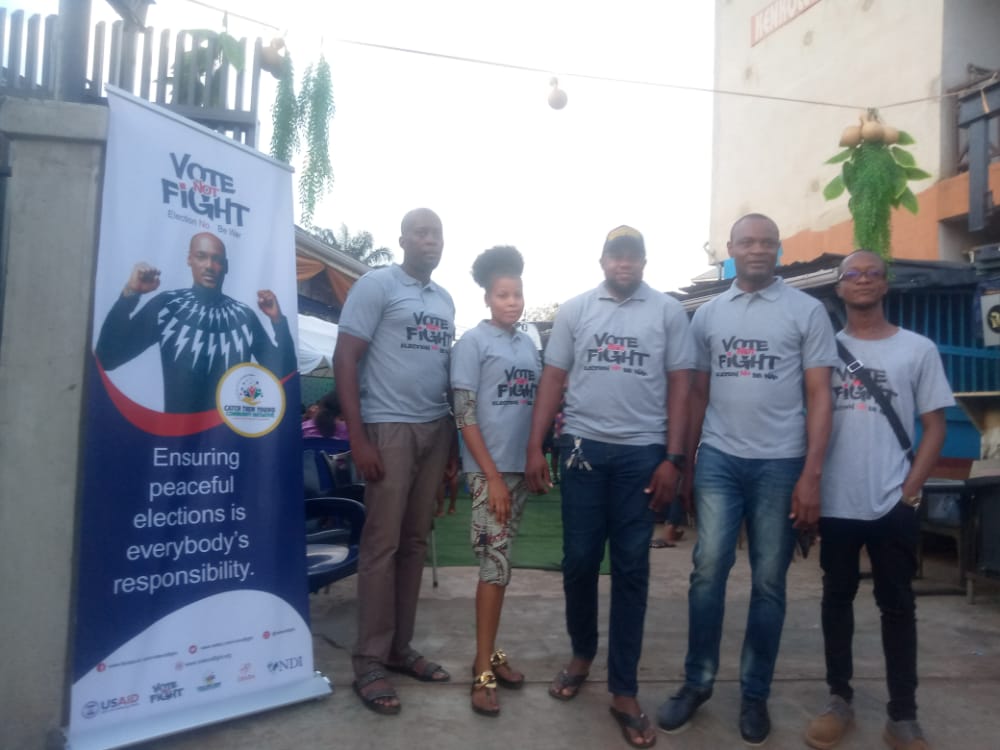 A group known as Catch Them Young Community Initiative (CATYCOI) has kicked off the “Vote Not Fight: Election No Be War” Campaign in Awka, Anambra State.

The campaign was to ensure a violence-free general election in the country in 2023.

It was launched in 2014 and is in collaboration with the 2Face Idibia Foundation with support from National Democratic Institute and the United States Agency for International Development.

The Executive Director CATYCOI, Mr. Nonso Orakwe, alongside other coordinators in the state, stormed the popular Nwoke Udi relaxation spot, situated along the ever-busy club road, Awka, where they partnered with the business owner to sensitize fun seekers on the dangers of election violence and the need to exercise their civic responsibilities in the forthcoming general election.

Mr. Orakwe who doubles as the ‘Vote Not Fight’ convener, in the South-East, said that the campaign was to pass the message to youths, politicians, and other stakeholders that the general election should not be a do-or-die affair.

He said: “The process of electing leaders in Nigeria has been plagued by a myriad of problems, ranging from voter intimidation and suppression, to harassment and outright violence.

“This campaign is to change the ugly trend, especially as Nigeria prepares for the general election and bring lasting peace in our political space.

“We urge our youths to prevent electoral violence by upholding democratic principles before, during, and after elections, because there is a connection between violence-free election, peace, and development.”

Speaking further during the interview, Orakwe noted that the Vote Not Fight campaign is a non-partisan, non-political and non-governmental group with coordinators and representatives spread all over the country.

According to him, “W
we have structures in the South-East and every other region in the country. In Anambra, we have the state coordinators comprising senatorial district coordinators and local government representatives that drive the message at the grassroots level.

“We tested the level of knowledge and preparedness of the public about the forthcoming election, and we found out that some majority have very poor knowledge of the election. We are also worried that most Nigerians are yet to get their PVCs. That is why we engaged this kind of relaxation center to ascertain actually if what we heard outside was true.”

Also speaking, Anambra South district coordinator, Chiamaka Okparaojiego, emphasized that the people were sensitized on a collection of PVCs, being peaceful, choosing the right candidate, and overall voter education.

She said elections in the country are usually marred by violence. She also noted that since the group was launched in 2015, violence associated with elections had reduced, but informed that the group would not want the country to go back to its former ways, hence the need to launch the campaign again.

Contributing, Mazi Ndubuisi Eze, popularly known as ‘Nwoke Udi,’ said the campaign is of immense advantage to the people around and the society at large. “For them to come and talk to people in this way is a welcome idea. The impact was felt.”

He encouraged Nigerians to vote and not fight. He charged them to spread the message across every length and breadth of the country. He also urged citizens to collect their PVCs, shun voter apathy, and vote wisely during the election.