By EditorNovember 2, 2022No Comments4 Mins Read 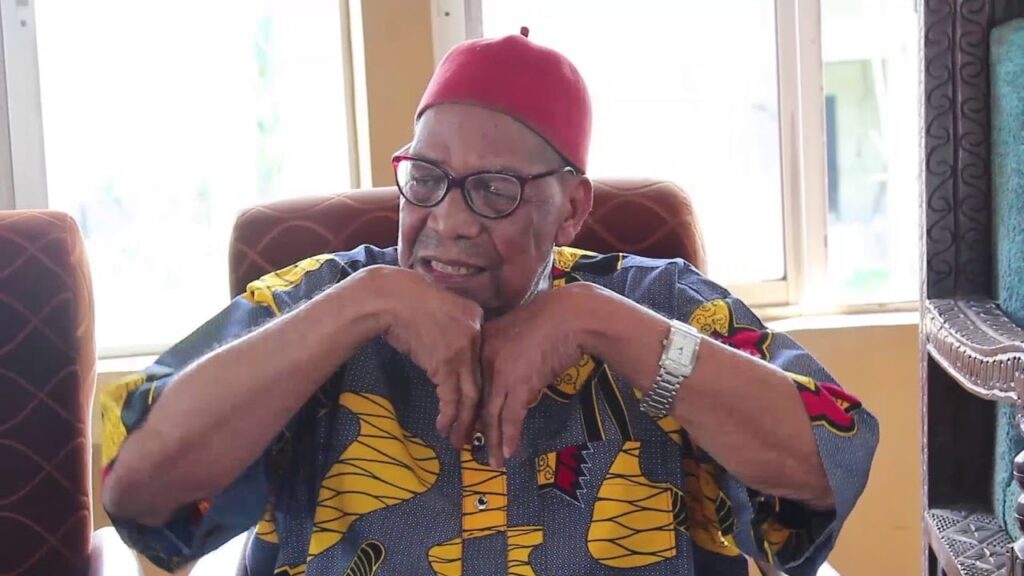 The apex Igbo social cultural organization, Ohanaeze Ndigbo Worldwide, has expressed grief over the death of Igbo sage and elder statesman, Chief Mbazulike Amechi, describing his demise as a monumental loss to the Igbo race.

Ohanaeze in a condolence message further described the former Aviation Minister as “a quintessential Igbo titan, icon and trail blazer.”

Chief Amechi (Dara Akunwafor) aka, ‘The Boy is Good,’ died at the age of 93 after eventful years on earth.

Ohaaeze Ndigbo in a statement by its Publicity Secretary, Dr Alex Ogbonnia, recalled “with freshness how Dara mortgaged the bloom of his youth to fight for Nigerian independence.”

The statement noted that the late nationalist on several occasions, was arrested and detained by the colonial authorities and on more than two occasions he preferred imprisonment to bowing to the oppressors.

Continuing, Ohanaeze said: “What really added to the Amechi mystique was that the more the incarceration, the more popular The Boy is Good became.

“It is a tribute to a rare courage, uncompromising principle, sacrifice, stoic heroism, patriotic dispositions and extra-ordinary faith in the struggle for Nigerian independence that earned Amechi the Member of the Parliament at a very young age of 29, parliamentary Secretary and subsequently the Minister of Aviation of the Federal Republic of Nigeria in the First Republic.

“When last the leadership of Ohanaeze Ndigbo led by Ambassador Professor George Obiozor, CON paid a courtesy call on Amechi, we were happy to discover that those passionate, revolutionary, oratorical, edifying zest and robust intellect that characterize freedom fighters were still very intact in him.”

Ohanaeze regretted that the Federal Government turned down the last request by the late nonagenarian who pleaded that the detained Leader of the Indigenous People of Biafra, IPOB, Mazi Nnamdi Kanu, be released to him.

“It is regrettable that the last wish Chief Amechi presented to President Muhammadu Buhari was rebuffed: Amechi made his way to Aso Rock and pleaded that Mazi Nnamdi Kanu be released to him on trust.

“Secondly, Amechi, on hearing that Buhari was to visit Ebonyi State, earlier this year, in spite of his old age, reactivated his combative paws and reflexes to meet Mr. President. At Abakiliki, Chief Amaechi in an uncommon oratorical skill, spoke pointedly but passionately to President Buhari on why Nnamdi Kanu should be released to him.

“Furthermore, Amechi’s voice waxed eloquent to the universal advocacy that it is the turn of the South-East to produce a president in Nigeria.

“Mbazulike’s roles in public life were diverse. In 1963, when the obnoxious Apartheid regime in South Africa was at its peak, in connivance with Dr. Nnamdi Azikiwe, the freedom fighter, Dr. Nelson Mandela escaped South Africa and the home of Chief Amechi, in Ukpor, Nnewi South Local Government Area, Anambra State, was considered the most suitable; perhaps because both of them shared common experiences in colonial pathologies.

“Mandela stayed in Ukpor for about six months. It was on departure from Lagos in 1963 that the Apartheid regime traced him and arrested him on arrival at Johannesburg.

Ohanaeze condoled with the members of his immediate family and prayed God to grant his soul eternal repose in heaven.

“Obiozor is deeply pained over this irreparable loss; but adds that the life of Amechi is a veritable lesson in uprightness, selflessness and heroism.

“On behalf of Ohanaeze Ndigbo Worldwide and indeed all the Igbo sons and daughters, we pray that the Almighty will grant the soul of Chief Mbazulike Amechi an eternal rest in his bosom.”