By EditorNovember 3, 2022No Comments4 Mins Read 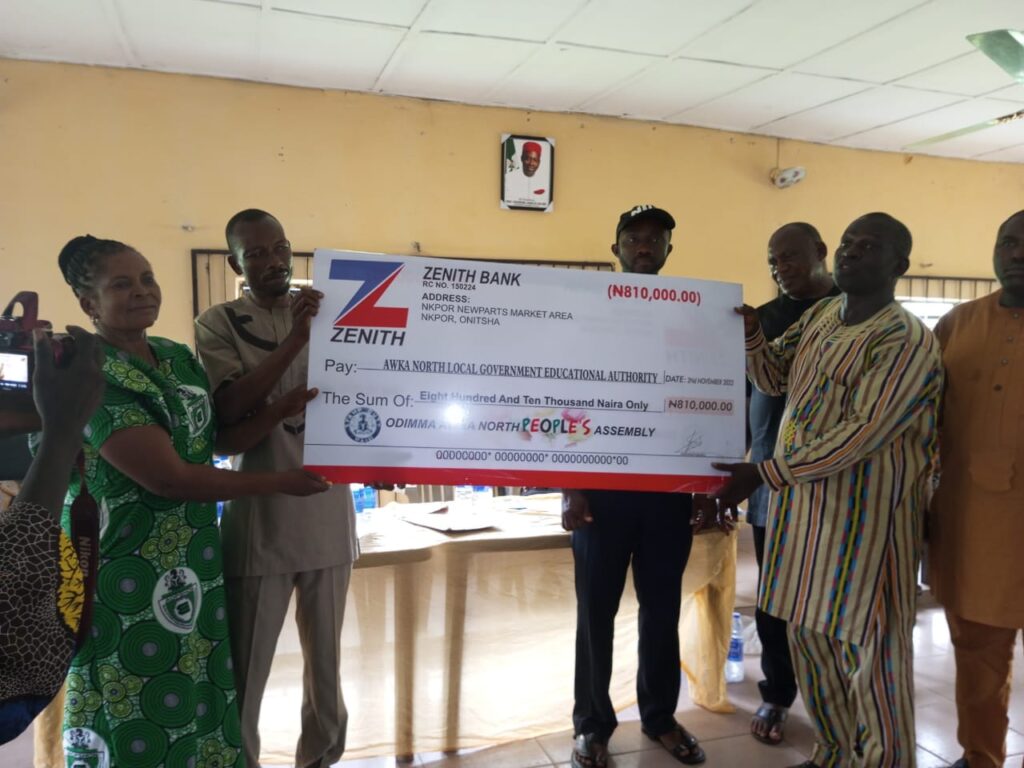 The Group presenting the cheque to beneficiaries

Odimma Awka North People’s Assembly, is a non-governmental organisation that is made up of men and women who are worried by the deplorable condition of infrastructures and other developmental challenges in the food producing area.

Ikengaonline gathered that the beneficiaries were drawn from ten communities in the council area and the scholarship covered tuition fees for the students’ one-year academic session in their respective schools.

Distributing the cheques to the beneficiaries at Achalla, the headquarters of Awka North, the chairman of the group, Chief Shedrack Anakwue, said the aim of the organization was just to champion the overall development of the area.

He explained that the gesture was to avail the downtrodden who have no hope of going to school due to poverty, the opportunity to do so. He also noted that the beneficiaries will be supervised and sponsored to a higher level provided the child is bright academically.

He said: “There is no political undertone to the programmes and activities. Ten pupils were selected from each of the ten communities. We will partner with the education authority in Awka North to ensure that the area received a facelift in the area of education.”

According to him, the scholarship was in partnership with the NUJ Anambra State, and A & D Tabansi Foundation, in reaching out to flood victims, underprivileged and deprived persons in the three Senatorial zones of the state. Anambra Central was the first point of call with Awka North as the focus.

He noted that the fund used for the scholarship was provided by Mr. Aloysius Tabansi, the President General of Urum Development Union who is also the Founder/Executive Director of the A and D Tabansi foundation.

He however called on parents and guidance to do their best by ensuring that they send the children to school, instead of keeping them back in the family or sending them on errands during school hours.

Speaking shortly before the handover exercise, NUJ Chairman in the State, Dr Odogwu Emeka Odogwu, emphasized the need to give every child the opportunity to gain education, and reiterated that education is the bedrock for sustainable development in every society.

Comrade Odogwu urged parents and teachers as well as the community leaders to resist allowing religion and denomination to permeate into the school system but warned that such may dwarf any effort to lift education in the zone.

He thanked Odimma Awka North Peoples Assembly and Founder of A & D Tabansi Foundation for the partnership, even as he announced that the union shall continue to partner with individuals and organizations to uplift humanity.

Comrade Odogwu also pointed out on the need for every child to learn a skill for self survival, encouraging families whose children may not continue to the university education due to the child’s inability to cope or resources not to neglect acquisition of skill as a fall back that will eventually take the child to complete his or her education through CEP or other means.

Reacting, the Officer-in-Charge of the Primary  Education Authority in Awka North, Mr. John Akwanya thanked the partners for the gesture and reassured them that the council is committed to the programme and development of education in its territory.

Also reacting, the Chairman Association of Head Teachers Awka North branch, Mrs. Monica Igu, described the move by the group as laudable, and promised that the teachers will not be found wanting in ensuring that the pupils are well trained.

Representatives of Odimma Awka North and NUJ as well as A & D Tabansi Foundation participated in the visit even as the highlight of the event was collection of cheques by the various headteachers of the benefiting pupils.