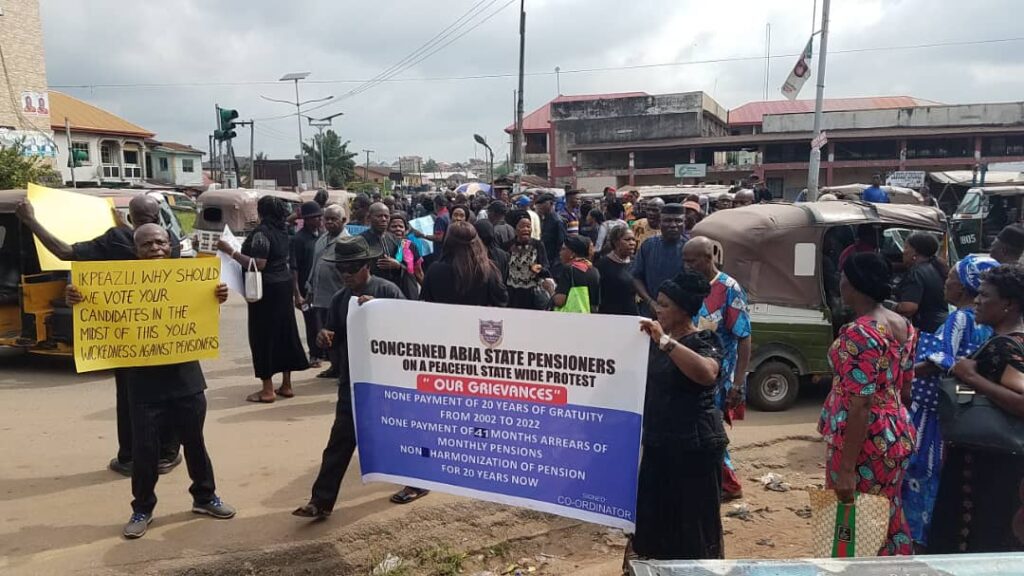 Pensioners in Abia State, Thursday, protested 45 months of pension arrears with a plea to the State Government to defray the backlog to reduce mortality rate among the senior citizens.

The senior citizens who were decked in black attires marched through major streets chanting anti-government songs with stop-overs at major junctions where they offered prayers.

They accused Government of insensitivity towards their plight and called on well-meaning indigenes of the state to intervene.

The pensioners noted with despair the miserable  condition of their members which they blamed on Government’s lack of care for them.

According to them, the condition of pensioners has never been so bad as it is currently since the history of Abia State.

They said they were only paid one quarter of their pension after every three months, claiming that they have been owed a cumulative of 45 months of pension arrears.

The pensioners equally claimed that between 10 and 15 pensioners die every month in Abia due to lack of care.

The pensioners who marched begged Gov. Ikpeazu “to show regards for elders.”

They carried placards with various inscriptions such as: “Ikpeazu pay us our over 22 years of gratuity;” “Ikpeazu, be informed that many pensioners can no longer get medical care due to lack of money;” and “Ikpeazu, why should we vote your candidates in the midst of this your wickedness against pensioners?”

Addressing newsmen later, their new Coordinator, Chief Emeka Okezie, decried the condition of pensioners in the state and pleaded with Gov. Ikpeazu to stop hardening his heart against them.

He regretted that their Leader, Elder Dan Amugo, had died due to lack of adequate care.

Chief Okezie who spoke with emotion-laden voice, called on Abians to prevail on the State Government to show care to pensioners to reduce their mortality rate.

“Our coordinator, Elder Dan Amugo, is in the mortuary and will be buried soon.

“Government of Abia State is owing the Abia pensioners a backlog of over 45 months unpaid pensions.

“We are the fathers; they are supposed to help us. Is it how it is done in  other states?

“We are suffering unimaginably. Why can’t this people help us?”

The leader of pensioners said that he would not stop demanding their rights despite intimidation by Government.

“Last time, I was arrested and dumped in the police cell. I won’t be cowed. If they like, let them invite me again, I will still go.”

The pensioners identified their other grievances, to include: “non harmonization of pension from 1998 to 2022; and unpaid accumulated gratuity for 22 years.”

“We have been dehumanized and subjected to unimaginable suffering as death toll ranges to about 10 to 15 old pensioners every month.”

The pensioners vowed to continue with their on Friday until their needs were met.