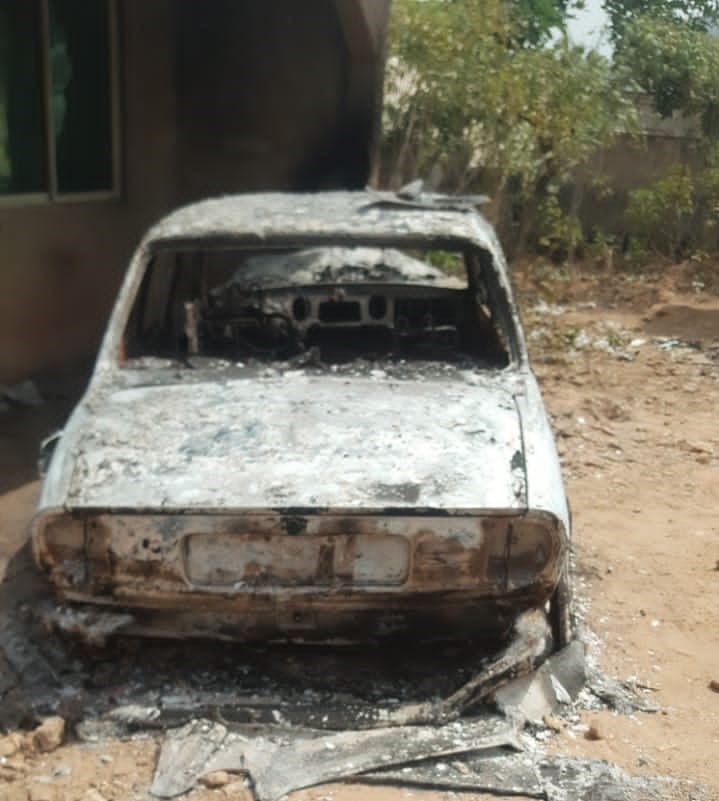 The Secretary of the All Progressives Congress (APC) Ebonyi State Chapter, Charles Ofoke; and the Coordinator of Nnodo Development Centre in Izzi Local government Area, Mr Chijioke Nwuzor, have been arrested by the police for allegedly attacking one John Nwiboko.

The arrest follows a petition written by Mr Iboko through his lawyers to the police accusing the duo of orchestrating the said attack on him and his family earlier in the year during which his car was set ablaze.

The attack, it was gathered, was as a result of a lingering leadership tussle in Igweledeoha Ezza-Inyimegu village, in Izzi LGA over the status of its Village Head.

Investigation revealed that the case which has lingered for some months now, was as a result of the fines placed on Mr Joseph Nwambam, Sunday Abachi, Ogbonna Nwizi, Joseph Nkwegu and Ogbaga Itsuke by the people of Igweledeoha Village in Ezza-Inyimegu Community  on 6th January 2022, for falsely accusing their village Head, Mr Cyril Nwite.

Following the community’s decision, Mr Nwiboko’s residence at No 8 Amikeaba Community, was allegedly attacked by some persons suspected to be hoodlums, and his 504 Peugeot  equally set ablaze.

In a petition, Michael Odo, Counsel to Mr Nwiboko, accused Chijioke Nwuzor of carrying out the attacks.

According to him, the suspects were guilty of an attempted murder, illegal possession of firearms and explosives, willful burning down of vehicle and conduct likely to cause a breach of public security in the state.

Odo in the petition dated 6th October 2022 and addressed to the State Director of State Security Service (DSS) of Ebonyi State Command, said: “Our client (John Nwiboko) informed us that on 31st January 2022 at about 11:45 pm, the suspects and others whose names are unknown to our clients but can be recognized if seen, armed themselves with guns, clubs, axes, explosives and several other deadly weapons and invaded our client’s private compound.

“On arrival at our client’s house, the suspects opened fire and threw an unidentified explosive on our client’s Peugeot 504 Salon Car and threatened to pull down our client’s one-storey building and kill our client and his family members.”

The Lawyer also in the petition noted: “In the course of running for his dear life, our client fell into a ditch and injured his left leg and sustained serious injuries. Our client reported the matter to the police and one of the suspects Mr Charles Ofoke was arrested. 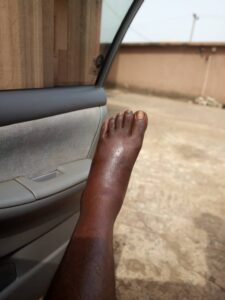 Continuing he said that: “When the above-mentioned suspect was arrested, Hon Paul Nwogha, the immediate past Executive Chairman of Izzi Local Government Area came to the police station to take the arrested suspect on bail and in the process, he (Nwogha) opted to ensure he settled the matter and pay for the damaged properties.

Following the petition, the Police in Ebonyi State arrested Mr Charles Ofoke, the State All Progressives Congress, APC, Secretary and Mr Chijioke Nwuzor, the Coordinator of Nnodo Development Centre in Izzi LGA and some of their cohorts for their alleged involvement in the said crime.

The suspects, who were later released on bail, also appeared before an Investigative Panel of the Ebonyi State police Command, last week, where they gave useful information to enable the police get to the root of the matter.

The victim, a staff of the Alex-Ekwueme Federal University Teaching Hospital, Abakaliki, AE-FUNAI, Comrade John Nwiboko, alleged that he was attacked just because of a misunderstanding involving his village head, Mr Cyril Nwite.

Narrating his ordeal, Mr John Nwiboko, alleged that his car was burnt down during the attack even as he stated the alleged involvement of Mr. Paul Nwogha, the immediate past executive Chairman of Izzi LGA of Ebonyi State, in the matter.

In an emotion-laden voice, Nwiboko said he narrowly escaped being killed by his attackers after setting ablaze his car and destroying other valuables worth over 10 million Naira.

However, Mr. Paul Nwogha described the allegations against him as falsehood and a calculated attempt by his enemies to tarnish his good image.

He said: “My reaction is very simple. I have never involved myself in the destruction of property, let alone burning anybody’s car. It’s just an allegation, which is a subject of investigation.

“But I’m telling you categorically that I am not part of the attack. What rather happened was that when he petitioned against a certain group of persons whom he accused of burning down his car, and as the then Local Government Chairman and because he is from my LGA, and I know him very well, I decided to intervene.”

He said: “I know that last week, Nnodo Development Centre Coordinator, Hon Chijioke Nwuzor, was arrested by one Mr John Nwiboko alleging that many months ago he conspired with former chairman of Izzi LGA, Hon James Paul Nwogha, APC Secretary, Chukwuma Ofoke and others, to attack him. He allegedly stated that his car was burnt down by the accused persons.

“That they conspired against him. That they were in unlawful possession of firearms, and other allegations. I intervened in that matter, asking them that we need to sit down and talk about the matter.

“If there is any conduct that is capable of threatening public security, I think I would have been given the privilege of alerting me. I told him that I needed to have the details of the petition.”

According to the Chairman, there is peace in my council area, including the affected village of Igweledeoha Ezza-Inyimegu.

State APC Secretary, Charles Ofoke, who was among those accused of masterminding the attack also confirmed his arrest by the police.

He however debunked the allegations levelled against him by Mr Nwiboko.

He said: “I did not attack him (John Nwiboko) and I did not burn his car. He wrote a petition against me and others, including the former chairman of Izzi Local Government Area, the APC Secretary of Ebonyi State, my humble self and others. “Last week, Police came alongside him to my house, armed with guns and arrested me. We went for an interview with the Commandant of the Commissioner of Police Monitoring Unit. This is an attempt to tarnish my good image,” he said.