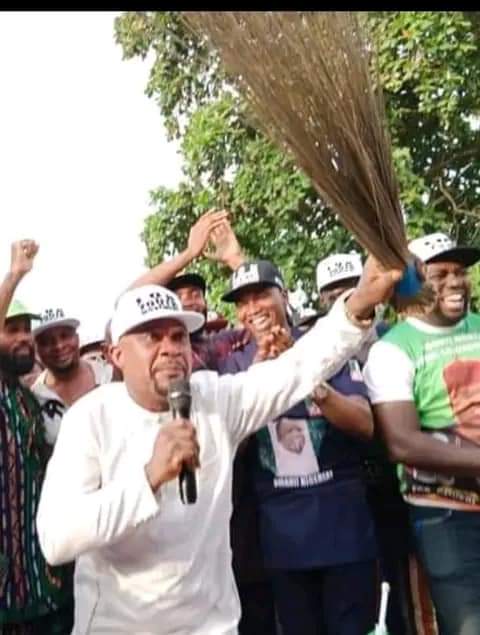 Elebe made his defection known during the visit of the APC gubernatorial Candidate, Francis Ogbonna Nwifuru to his community, Amechi Izhiangbo, in Ohaukwu Local Government Area of the State.

He said his defection was born out of the conviction that APC is the winning team in the state, while urging his followers to support the FON movement, as well as all APC candidates contesting for election in Ohaukwu Local Government Area come 2023.

Reacting, the APC gubernatorial candidate, Francis Ogbonna Nwifuru (FON), welcomed Elebe into the party and assured him that the APC would continue to deliver dividends of democracy to Ebonyi people, before and after the election.

Nwifuru, who is the speaker of Ebonyi State House of Assembly, called on them to embrace peace by adhering to the charter to equity, fairness, and justice in the State as well as credibility on the candidates they would vote for at the polls to ensure the delivery of good governance.

“This is the time to talk about peace, to work peace for the interest of our dear State. I believe in the unity of our dear state, and I believe I can unify our people,”Nwifuru said.

He expressed confidence that Ohaukwu people would vote for him for his emergence as Governor come 2023, which would further strengthen the unity of Ebonyi State.

Meanwhile, the All Progressives Grand Alliance (APGA) in Ebonyi State had berated Elebe for the action.

APGA in a statement accused the decampee of lacking integrity and popularity to stand for election, stressing that he is known for his political harlotry lifestyle.

The party made this known in a statement by the publicity secretary, Mr. Nwanchor Chibuike on Thursday.

The party, however, attributed the defection of its assembly candidate to hunger and poverty, alleging that Elebe is known for his inconsistency in the party politics.

The statement read in part: “Elebe who has been inconsistent in all his ways was only inspired by the twin factors of hunger and poverty to take the solo walk of defecting to the APC, whereas the majority of his supporters and our party men have remained in APGA.

“Elebe was but a political orphan when he ran to APGA after losing primaries in PDP. We accepted him, sheltered him and convinced our supporters to support him. Unfortunately, he has now chosen the path of ignominy.

“We are glad to inform the public that Elebe left to the APC alone and our joy and strength as a party to beat therefore is that majority of his supporters, our party’s members, sympathizers and loyalists including even members of his family still stand firmly in support of APGA,” the party stressed.

The party, however, called on its teeming supporters in Ebonyi to remain resolute and committed and increase efforts to ensure that their gubernatorial candidate, Benard Odoh, wins in the forthcoming general election in the state.