By EditorNovember 7, 2022No Comments3 Mins Read 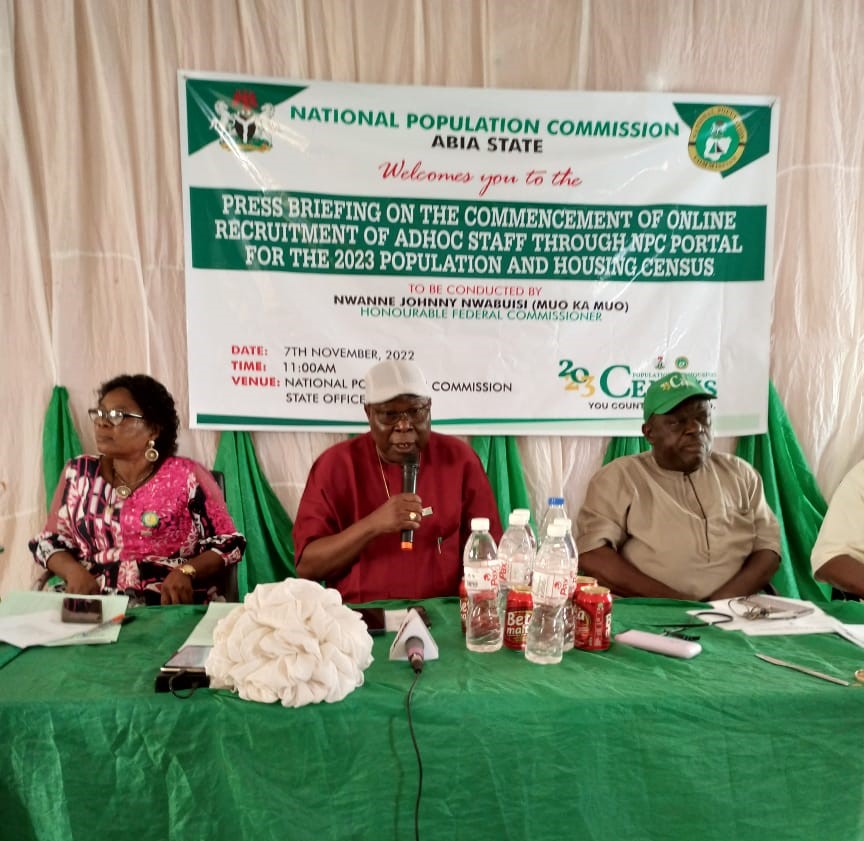 National Population Commission, NPC, has pleaded with the Indigenous People of Biafra, IPOB, not to disrupt the 2023 national population census in the South-East  as was the case in the 2006 census when the Movement for the Actualisation for the Sovereign State of Biafra, MASSOB, scuttled the exercise in the zone.

The Commission explained that successful conduct of the population census would be in the best interest of everybody including Biafra agitators advocating for referendum.

NPC Federal Commissioner in charge of Abia State, Chief Jonny Nwabuisi, who made the appeal at a press conference Monday in Umuahia, regretted that the activities of MASSOB members during the 2006 census had an enduring negative impact on the population of states in the South-East.

He, therefore, appealed to IPOB and other Biafra agitators not to rock their own boat by disrupting the forthcoming exercise.

Nwabuisi equally appealed to stakeholders in the zone to assist the Commission in sensitising the people to embrace the exercise.

He assured that the commission had put in place measures and facilities to ensure that the exercise is successful and credible.

According to him: “In 2006, it was MASSOB; today it’s IPOB. But I say that it’s in the interest of IPOB to allow the census. If they talk of referendum they cannot do it in a vacuum.

“Referendum is based on population and IPOB has no population of its own that is recognized by any international body that can conduct referendum. They only rely on the population of Nigeria.

“So, it’s imperative and necessary for IPOB members to help in propagating the advocacy on census so that the South-East will have successful census. Otherwise whatever thing they are doing will be a failure.”

The NPC boss disclosed that the commission had commenced electronic recruitment of ad hoc staff through the commission’s portal for the 2023 population and housing census.

He said that about 1.5 million persons would be recruited nationwide for the exercise, adding that the ongoing recruitment will end by December 28.

Chief Nwabuisi who said that only computer literate applicants “are eligible” for the exercise, explained that the reason for the on-line recruitment was to ensure equity and competence.

He further said that only applicants with National Identify Number, NIN would be accepted.

The NPC boss further hinted that the 2023 census would be conducted in the month of April after the general election would have been successfully concluded.

On the method of enumeration during the exercise, Nwabuisi said only persons sighted physically would be enumerated, adding that no person(s) would be captured by proxy.

Responding to a question, the NPC boss, however, ruled out the option of electronic capturing during the exercise.