They’re encroaching on our lands, demolishing our buildings – Anambra community cries out

By EditorNovember 20, 2022No Comments4 Mins Read 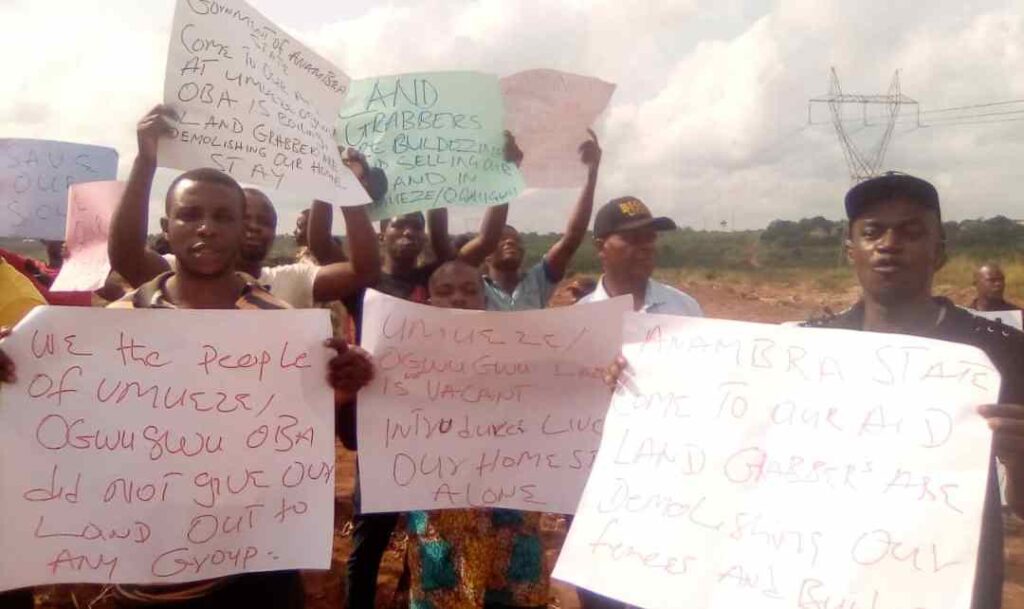 People of Ogwugwu/Umueze Oba community in Idemili South Local Government Area of Anambra State have protested alleged encroachment on their ancestral lands and subsequent demolition of about 70 houses by some land grabbers aided by security operatives and  suspected armed thugs.

It was gathered that for four consecutive days the encroachment and demolition have continued, prompting some residents to forcefully abandon their ancestral land/homes for their lives.

The protesters carried placards with varying inscriptions as: “Save our soul, our land is not for sale,” “Save our land from land grabbers,” “Land grabbers are demolishing our homes,” “Stop selling our land to land agents,” among others.

Narrating their ordeal to reporters, Chairman of the community, Barr. Chuba Oranusi, recalled that the community ceded a portion of the land to the State Government, during the tenure of the former Governor, Chinwoke Mbadinuju, who then gave it to a certain land development firm for construction of market.

He added that it was then agreed that the firm would not go beyond the boundary given to it by the villagers even as a paltry compensation of #72 million out #144million they agreed, was paid.

He said, “They never came back to commence work on the project until now that they came with bulldozer, military, police, armed thugs, among others, and commenced encroachment on our land and demolishing any building within reach, exceeding the portion given to them.

“For four days now they have continued the encroachment and demolition of structures, including destruction of our wives’ farmlands and economic trees. Most of us have become homeless and have nowhere to run to.

“What you see here are touts, people who use government apparatus to acquire community land. But we will not allow them, let them just develop the portion we gave to them, we are not interested in the compensation.

“What they do is that as they demolish they call buyers and sell at #10million, #5million, as the case may be, for a plot. So many were beating up when they approached them to know what was amiss.

“We urge Governor Charles Chukwuma Soludo to come to our rescue as we have been rendered homeless and the encroachment is still ongoing. They are not even developing the market they claimed they wanted to build.

“The destruction is quantifiable as it was a land where we buried our grand fathers. We were born in this land and have lived here since Adam.”

Vice chairman, Chief Sir. Emeka Motanya, said that the construction firm, three years ago called them to compensate them and they reminded them that they would not go beyond the Ekulo stream road (demarcation), given to them.

“But now they have gone beyond it and even chased us out from our residence, made us to become homeless because they have demolished our buildings, using the military, police and armed thugs.

“For four days now, military, police and armed thugs, some are familiar faces, have continued to invade and demolish our houses, and when I asked why the demolition, I was beaten black and blue, I have been hospitalized for days. The house of our chairman was the first to be demolished.

“Let them leave us alone and develop the portion we agreed with them. Governor Soludo please come to our rescue before they kill us all and take over our land,” he pleaded.

Also, youth leader, Mr. Uchenna Obiegbu, said that fear of uncertainty has gripped them as their houses have been demolished and more are being demolished.

“We can never be alive and see land grabbers and greedy land speculators confiscate our fatherland. I have just been holding back our youths to avoid bloodshed but that has a limit,” he said.

When contacted, spokesman of the construction firm, Mr. Mike Egbule, dismissed the allegations, saying the firm never went beyond the portion given to it.