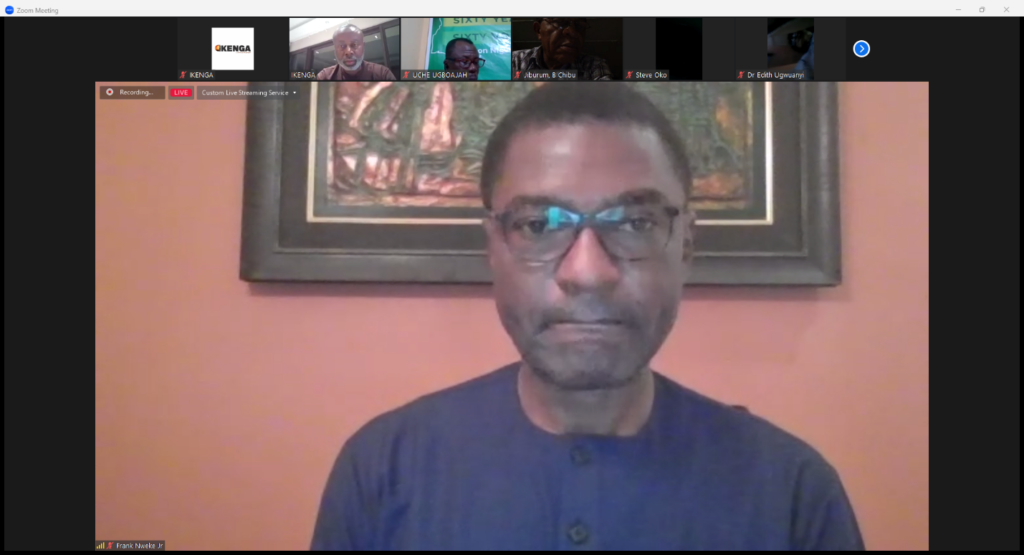 The governorship candidate of the All Progressives Grand Alliance, APGA, in Enugu State, Frank Nweke Jnr, has decried the debt profile of the state, claiming that Enugu is now the 20th most indebted state in Nigeria.

Nweke Jnr who made the claims while featuring at the Ikengaonline town hall meeting series for governorship candidates from the South-East zone, said the Peoples Democratic Party, PDP-led administration in the state had plunged the Coal City state into unnecessary debts.

The former Minister of Information said that with a debt burden of over N60 billion hanging on her head, the state had reached its borrowing limit.

He further hinted that there was a clandestine move by the State Government to borrow additional N30 billion, and urged citizens to resist the move which he claimed was not in public interest as the current administration is about winding down.

The APGA governorship candidate who also claimed that Enugu State owed over$124 million in external debts, said it was wicked for the state to go for fresh loans.

He warned the PDP-led administration against mortgaging the future of the state and leaving behind mountain of debt for the ” in-coming APGA Government.”

Nweke Jnr who accused the Ifeanyi Ugwuanyi-led Government of financial recklessness, and lack of transparency, challenged the Government to publish the state’s revenue and expenditure.

He decried environmental pollution, corruption and fragrant abuse of power which he alleged, were the hallmark of the the PDP Government in the state.

“PDP-led Government in Enugu is building weak institutions. Why are lands sold, contracts awarded and approvals given at the Government House?

“Why will there be a refuse dump at Ugwu Onyeama, an entry point to the state?

Nweke Jnr further lamented the plight of teachers in the state following months of salary arrears.

The former Chairman, Nigerian Economic Summit, argued that teachers were supposed to be well remunerated and not owed considering the pivotal role of education in any society.

He vowed that under his watch, salary arrears would be history as workers would get paid as and when due.

The governorship hopeful promised to make public his security votes and how it is utilized, arguing that concealing security votes under the pretext that security matters should not be made public is a precursor to financial fraud.

Promising to demystify governance and run a transparent Government, Nweke Jnr said he would also publish audited accounts of the state government.

He promised to assemble the best of hands and technocrats to rebuild the state, regretting that few  political hawks had ruined the state’s economy.

Nweke solicited the support of all progressives irrespective of their party affiliations to support his bid to give birth to a new Enugu.

“We will build a stable and prosperous state where we can all be proud of. I will elevate governance and I will be accountable and will transform lives.”

Nweke Jnr who decried the plight of workers and pensioners, said that under his watch Enugu workers would no longer be owed their salaries, pensions and other entitlements.