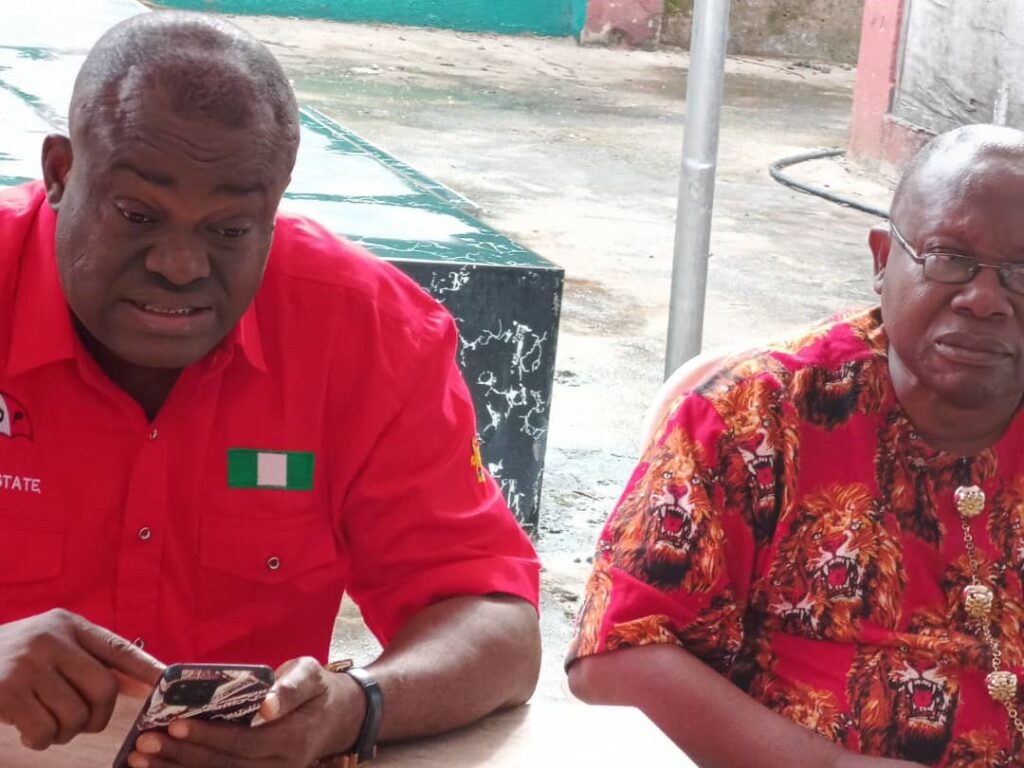 Amah and Elder Egbu during the briefing

Governor Nyesom Wike of Rivers State, and all four Governors in his G-5 Integrity Governors group, are to storm Abia State on Thursday, as the ruling Peoples Democratic Party, PDP, in the state is set to formally flag of its campaign.

This was disclosed Tuesday at a press conference by the PDP Vice Chairman, Abia North and the Acting Publicity Secretary of PDP, Elder Abraham Amah.

Elder Amah who was flanked by former Secretary to State Government, SSG, Elder Ralph Egbu; and the Secretary of the PDP Campaign Council, Chief Stanley Ojigbo, said that all the PDP candidates for various elective positions would be unveiled during the event.

He explained  that the presence of the G-5 Governors at the event would be in solidarity for Gov Okezie Ikpeazu who is one of them, adding that Abia remains a strong base of the PDP.

“The Integrity G5 PDP governors namely; His Excellencies Barr. Nyesom Wike of Rivers State; Dr. Samuel Ortom of Benue State; Chief Ifeanyi Ugwuanyi of Enugu State; Mr. Seyi Makinde of Oyo State; and the host governor Dr. Okezie Victor Ikpeazu would grace the occasion in person as a mark of respect and solidarity with their brother governor,” he said.

Giving the venue of the unveiling as Umuahia Township Stadium, Elder Amah said that PDP would sweep the forthcoming polls considering the scorecard of Gov. Ikpeazu.

He expressed strong support for the party’s governorship candidate, Professor Uche Ikonne; his running mate, Hon. Okey Igwe; and other PDP candidates for the 2023 elections, describing them as champions.

He further argued that Ikpeazu’s performances so far would be a walkover for PDP candidates in 2023.

He boasted that Abians would reciprocate Ikpeazu’s good works by voting en masse for PDP candidates in the state.

“The good work of the PDP in the 16 years it was in power at the centre and the exemplary leadership displayed by our indefatigable and irrepressible governor is enough evidence for Ndi Abia to know that the operational word in the 2023 Abia election is continuity at the governorship level, reinstatement of all PDP candidates at the legislative level including returning PDP to the power at the centre.

“It’s an article of faith for us that they will choose the PDP that rescued them from the shackles of poverty in the past seven years despite the economic decline foisted on them by the APC government at the centre due to its inability to formulate sound economic policies for the growth and prosperity of Nigerians.”

Amah said that while PDP-led administration was busy working in Abia, the APC-government at the centre was busy destroying Nigeria.

He said APC and the opposition parties would not have any inroads in the state.

On the stand-off between the presidential candidate of PDP, Atiku Abubakar and Gov. Wike, Elder Amah said Abia PDP is not working against  Atiku’s candidature.

He explained that although Abia PDP believes in the capacity and competence of Atiku, there was need to get the interest of Abia secured in Atiku’s Government.

According to him, negotiating for the interest of Abia does not in any way amount to working against Atiku’s candidature.