By EditorNovember 29, 2022No Comments3 Mins Read 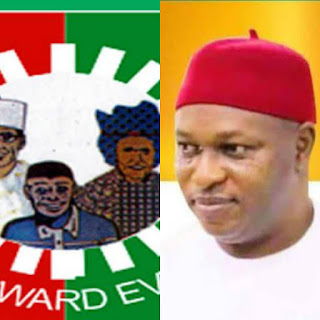 The Labour Party (LP) in Enugu State, has disowned billboards with the party’s logo mounted in some areas of Enugu with the picture of Capt Everest Nnaji as LP  Governorship candidate.

The State Publicity Secretary, Mr Titus Odo, said this in Enugu on Tuesday in a statement obtained by Ikengaonline.

Odo said that the reaction becomes necessary in order to disabuse the minds of its supporters that the party has factions in the state.

“The attention of the leadership of Enugu State Labour Party (LP) has been attracted to a billboard conspicuously mounted along Airport Road, Emene, bearing our party logo and insignia.

“Recall that Justice Nkonye Evelyn Maha of the Federal Hgh Court, Abuja had ordered the leadership of Enugu State Labour Party to conduct fresh gubernatorial primaries for the the party within 14 days.

“It’s pertinent to note that the 14 days ordered by the Court had elapsed and no fresh primary election was conducted, the party having appealed the said judgment and rightly so,” he said.

In the statement, the party said it was surprised to see billboards around the city bearing LP logo and insignia.

“We were surprised to see a billboard bearing Labour Party logo and insignia presumably mounted by the said Nnaji along Airport Road, Emene, Enugu and other areas of the city.

“For the avoidance of doubt, we want to completely distance and dissociate our party from this macabre dance of shame as it’s the handiwork of desperadoes, impostors and  mercenary politicians.

“The antics of those behind Nnaji  are well known and documented.

“They are mercantile politicians with no established pedigree in honour and integrity,” he said.

He said that the usual practice by the Enugu State PDP-led Government of planting  moles in opposition parties who will pose as  candidates to cause distraction is well known.

“And we are ever ready to stoutly resist it this time around; people are wiser now and gone are those days,” he said.

The party advised the general public to discountenance Nnaji and his billboards, adding that, he, Nnaji, was never a registered member of the party in Enugu State.

“In view of the foregoing, the general public are advised to disregard Nnaji as he is poised to reaping where he didn’t sow.

“For the records, Mr Evarest Nnaji is not a member of our great party. It’s an established fact that Enugu State Labour Party has no factional leadership.

“It’s really funny when someone, who is not a registered member of the party will be laying claim to the guber ticket because he thinks he has a large financial war chest,” he said.

“As it stands, our guber candidate is Hon. Barr. Jonathan Chijioke Edeoga.

“We have implicit and unwavering confidence in his capacity, competence, character and credibility.

“He is prepared to take Enugu State out of the woods when sworn-in, come 2023,” Odo said.