He can be like Saro-Wiwa if he likes, Prof Obiwu replies Uwem Akpan 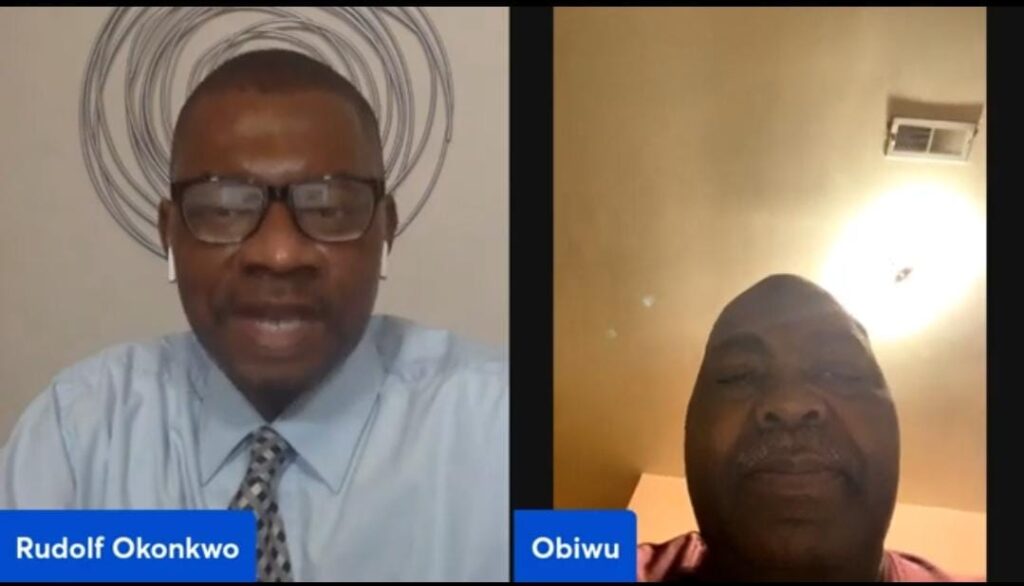 Reactions to Umem Akpans charges in his novel, New York, My Village, that Biafran soldiers maltreated southern Minorities have continued unabated. During his appearance on 90MinutesAfrica on Sunday, Prof Obiwu Iwuanyanwu took issues with Uwem Akpan.

Obiwu Iwuanyanwu, who teaches World History and Critical Theory at Central State University in Ohio, USA suggested that the writer can be like Ken Saro-Wiwa, if he chooses.

Obiwu was unhappy that Uwem Akpan stated that Igbo writers like Chimamanda Adichie, Chinua Achebe and others have been presenting a one-sided aspect of the Biafran War story that made the Igbo people look like saints while the Nigerian side looked like the devil.

In the penultimate week’s interview on the same show, Uwem Akpan stated that there was no evil that the Nigerian military committed in the East during the war that the Biafrans didn’t commit within the minority areas of the then Eastern Region. In one clip played to Obiwu, Uwem Akpan stated that writers like Achebe knew about the atrocities the Biafran soldiers committed in minority lands.

“What did Uwem want Achebe to do?” Obiwu asked. The author of “The Critical Imagination in African Literature: Essays in Honor of Michael J. C. Echeruo” urged Uwem to lower his temper. “I’ve not read anything written by Uwem Akpan. I know he is anti-Biafra,” he said.

Obiwu also weighed in on trending Nigerian writer Akwaeke Emezi. He had a problem with Akwaeke’s antagonistic relationship with Chimamanda Ngozi Adichie. “I don’t know what to say about Akwaeke Emezi. I have been having difficulties talking about Akwaeke… to her, everybody is a suspect,” he said while discussing Akwaeke’s gender advocacy.

Defending poet, Christopher Okigbo, who fought and died during the Biafran War, against critics like the late scholar Ali Mazrui, Obiwu, whose latest work is “What Is Literature?: Critical Essays on Ezra Pound, Chinua Achebe, Roy Campbell, Nnamdi Azikiwe, Langston Hughes, Christopher Okigbo, Dennis Brutus, and Archilochus,” Obiwu stated that, “Ali Mazuri’s book (The Trial of Christopher Okigbo) has no basis at all. It is better forgotten the way it has been. What Ali Mazrui was writing was nonsense.”