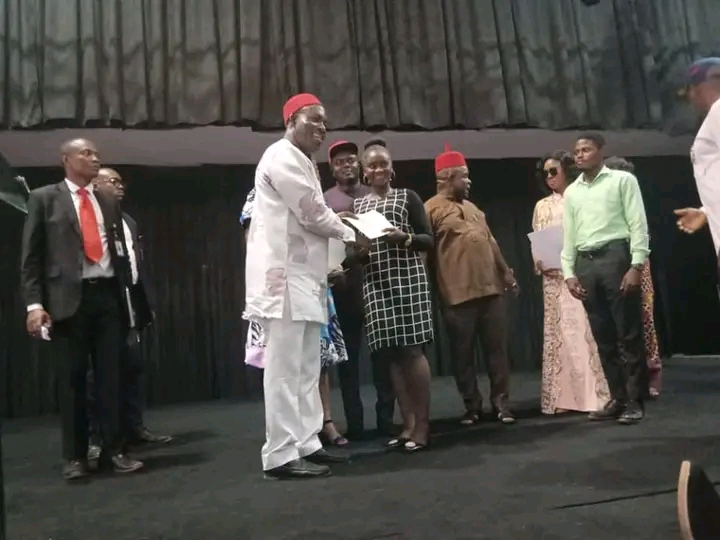 Governor Soludo made the pledge during the ceremonial presentation of appointment letters to the newly recruited five thousand teachers for the primary and secondary schools in Anambra State.

Governor Soludo while addressing the five thousand successful teachers noted that teaching is not just a job but a vocation and insisted that no other condition other than merit should be the consideration for the recruitment.

Governor Soludo further stated that recruitments under his watch must be free, transparent and fair which he defines as Anambra’s standard.

He congratulated the teachers and noted that professionalism is the watch word of Anambra’s education sector assuring of on-the-job training to better prepare them for the job.

Promising them of prompt payment of salaries, pensions and gratuities, the Governor assured them of effective motivation and incentives to improve productivity and output.

Highlighting the focus areas on education as contained in his manifesto, Governor Soludo maintained that global best practices will continue to be the beacon of his administration.

The Commissioner for Education, Professor Ngozi Chuma-Udeh, in her address, noted that the rigorous selection process has produced the best, chosen based on capacity and competence.

She encouraged them to go on and raise children that will conquer the world through delivering productive education.

The Chairperson, Anambra State Universal Basic Education Board, Dr Vera Nwadinobi and her Post Primary School Service Commission counterpart, Professor Nkechi Ikediugwu, in their separate speeches described the Governor as a visionary leader and said the exercise is the foundation to sustainable human capacity development.

On their parts, Honourable Ejike Okechukwu, the Chairman House Committee on Education and member representing Anaocha II Constituency in the state House of Assembly and the Chief of staff to the Governor, Mr Ernest Ezeajughi, said that the recruitment signals a rebirth in Anambra’s education system and commended Governor Soludo for his commitment towards building a greater future for the state even as they asked the teachers to live up to the expectations.

Igwe Emeka Onuorah of Oraukwu while commending the great feat said that Soludo was already setting transformational legacy saying that Ndi Anambra will forever be grateful.

He expressed satisfaction with the pace at which Governor Soludo is attending to strategic developmental issues saying that achieving a new Anambra is near.

In their vote of thanks, Miss Adaba Onyeka and Mr Obed Nwokwu on behalf of the newly recruited teachers, thanked the State Government for the opportunity to serve the state and promised to deliver quality services in line with the professional standard practice for the greater good of the state.