By EditorDecember 8, 2022No Comments3 Mins Read 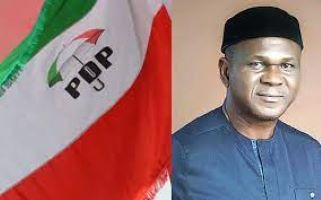 The Federal High Court in Abuja on Wednesday nullified the Peoples Democratic Party (PDP) primary elections in Ebonyi State that produced candidates for the State House of Assembly, National Assembly and the Governorship for the 2023 elections in the state.

Delivering her judgment on the matter, Justice Binta Nyako ordered the PDP to conduct fresh state Congresses in Ebonyi State, for the purpose of the election of its candidates within 14 days.

Justice Nyako also directed the Independent National Electoral Commission (INEC), to monitor the fresh state Congresses, to be conducted by the PDP for the election.

The judgment followed a suit marked FHC/ABJ/CS/1319/2021, filed by Mr. Okoroafor Tochukwu Okorie against the PDP and INEC.

The court agreed with counsel to the plaintiff, Okoro Mkemakolam, that the canceled PDP primary in Ebonyi state was conducted in flagrant disobedience of the order of the Court of Appeal, staying the execution of the judgment of the Federal High Court sitting in Abuja, which had declared Joseph Sila Onu as the Ebonyi State Chairman of the party.

Justice Ahmed Mohammed of the Abuja division of the Federal High Court had in a judgment delivered on April 13, 2022, recognized Joseph Silas Onu as the authentic Chairman of the Ebonyi State chapter of the PDP.

Dissatisfied with the decision, Okoroafor Okorie through his counsel, Nkemakolam Okoro approached the Abuja division of the Court of Appeal to set aside the judgment of the lower court.

The appellant followed it up with a motion for stay of execution of the judgment of the Federal High Court which was granted by the appellate court.

Specifically, the Court of Appeal had on May 23, ordered the stay of execution of the judgment of the Federal High Court and directed that all parties be returned to status quo ante bellum.

That on May 28th and 29th, pursuant to the letters dated of May 5th, 7th and 13th, Joseph Silas Onu at the behest of the PDP in Ebonyi State, convened and chaired the state Congress of the party in the state for the purpose of conducting the primary election in the state, in defiance of the clear orders of the Court of Appeal staying the execution of the judgment of the Federal High Court

In his suit the plaintiff had prayed the court to set aside the actions of the PDP taken against the subsisting orders of the court.