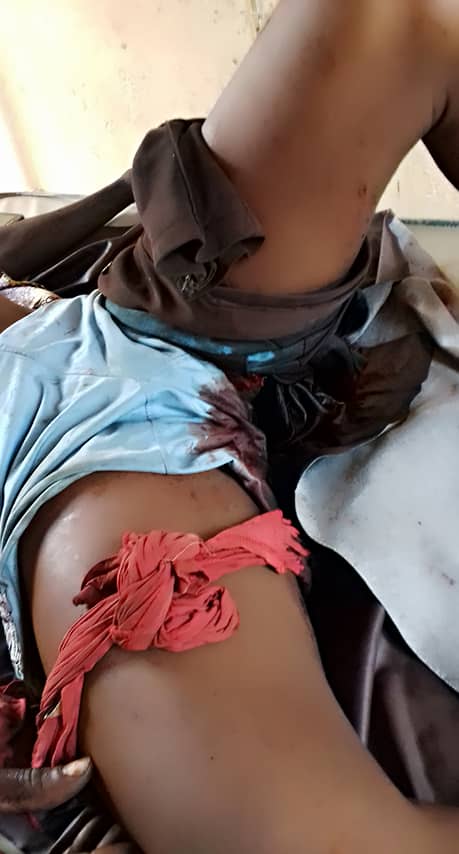 One of the victims of the attack

Unknown gunmen suspected to be enforcers of the five-day sit-at-home declared by Finland-based Simon Ekpa, Wednesday, invaded Nwakpu market in Ikwo Local Government Area of Ebonyi State where they shot many people and set vehicles ablaze.

The hoodlums were said to have stormed the market on motor bikes shooting sporadically as people scampered for safety.

One of the victims simply identified as Henry, told our Correspondent that people were in the market when the unknown gunmen suddenly showed up and started shooting.

The victim who said his vehicle was among the ones set on fire, said he was badly wounded by the attackers.

He said that he was  shot in the leg and given deep axe wounds in the head by the hoodlums who abandoned him in the pool of his blood before rescue came his way.

Police confirmed the incident and said that the hoodlums fled when security operatives arrived the market.

Divisional Crime Officer in charge of Ikwo, Kingsley Okorie, said that security agents pursued the attackers but they fled into the bush.

“We gave them a hot pursuit but they escaped on motorcycle through narrow paths to the bush,” he said.

The officer confirmed that one of the victims, Henry had been taken to the hospital where efforts were on to extract the bullets lodged in his body.

Although the five-day-sit-at-home had been generally ignored by the people, there have been isolated attacks against innocent members of the public in some parts of the South-East.

IPOB has since distanced itself from the purported sit-at-home, saying that Ekpa is being sponsored by enemies of Biafra to destabilize South-East and demonise the pro-Biafra movement.

There have also been public outrage against Ekpa and his co-travelers.